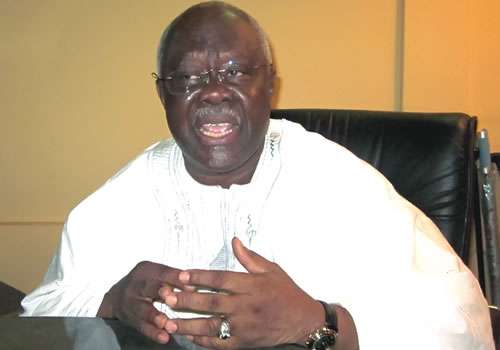 Why Wike, Makinde, others met in Lagos – Bode George

Mr Goerge says he has not decided who to vote for in the presidential election.

A former deputy national chairman of the Peoples Democratic Party (PDP), Bode Goerge, has said the five aggrieved governors of the party met in Lagos on Sunday to honour the party’s loyalists in the state..

Lagos is governed by the ruling All Progressives Congress (APC) and is also the home state of the APC presidential candidate, Bola Tinubu, whom Mr Wike and some of his supporters have fraternised with.

Mr George said the governors, also called the G5 but whom he referred to as the “younger ones”, are now at the “frontlines’ ‘ and they were around to honour the party’s loyalists in the state.

“They have the energy to move from location A to location B. I’m closer to 80 now. So what am I going to be running around for? There is time for everything,” he said.

“That’s why they came, they honoured us. They said Baba, we will come to Lagos for the briefing of the larger group.”

Since Atiku Abubakar emerged the party’s presidential candidate of the PDP, the governors have been clamouring for the removal of the party’s national chairman, Iyorchia Ayu, also a northerner like Atiku.

They also demanded that Mr Ayu be replaced with a southerner to correct the imbalance between the northern and southern regions in the leadership of the main opposition party.

Reiterating that demand, Mr George insisted that Mr Ayu must be replaced by someone from the south.

Mr Goerge, who was involved in the national chairmanship race of the party in 2017 said that he is not interested in contesting for the again.

“So, it means the odd numbers are numbers in one zone, the even numbers will be in the other zone.

“After eight years, all the positions will have to come to the south and all the other positions in the south will go to the north. So you have guaranteed the sustainability of positive inclusivity in the system.”

He said that with the situation of things, whenever Atiku is in Lagos to campaign, he would not receive him or attend the event.

He, however, added that “we haven’t closed any doors yet for reconciliation and proper visitation.”

Asked who he would vote for in the forthcoming election, the party’s stalwart said he has not made up his mind yet on who to vote for.

Probed further if there is any chance he might vote for the presidential candidate of the APC, he said “never.”

Mr George is a local opponent of Mr Tinubu in Lagos and has condemned his presidential bid after years of raising questions on Mr Tinubu’s indigeneship of Lagos and academic background.

Asked if he would cast his vote for Peter Obi of the Labour Party, he responded, “I won’t answer that but he is not closed.”