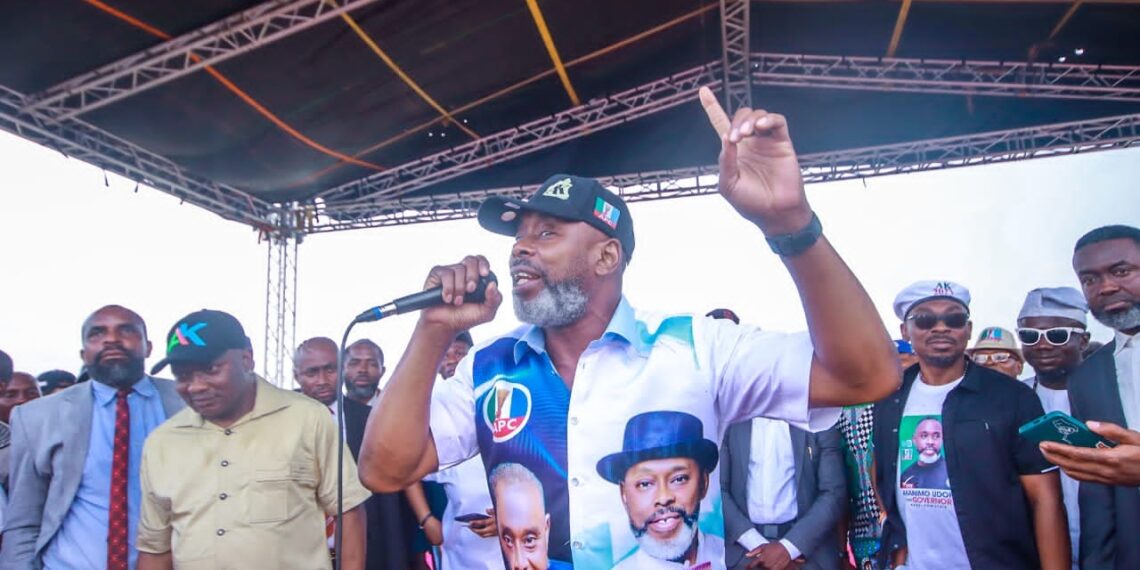 “Eight years ago, the spirit of God left this (Akwa Ibom) state.”

The All Progressives Congress (APC) governorship candidate in Akwa Ibom State, Akanimo Udofia, has told the people of the state that the presidential candidate of the party, Bola Tinubu, would help transform the state to “look like” Lagos State, if elected president in 2023.

Mr Udofia is yet to be recognised by the Independent National Electoral Commission (INEC) as a candidate for next year’s election, but that appears not to have deterred him from campaigning.

The APC candidate is in court, seeking an order to compel INEC to put his name on the ballot.

“One man, Bola Ahmed Tinubu, developed his state to such a level that it is a country of its own. There’s nothing you don’t have in Lagos State,” Mr Udofia said on Saturday in Uyo at a rally to support Mr Tinubu and his running mate, Kashim Shettima.

An APC supporter in the state uploaded a clip of the rally on Facebook.

Mr Udofia said no state in Nigeria has progressed more than Lagos.

“He (Tinubu) planned the state and put a lasting economic programme, and that is why till today Lagos is progressing and progressing.”

The candidate asked the crowd at the rally, “You know how Lagos is?”

“The only person that loves Akwa Ibom… The only presidential candidate that can deliver for Akwa Ibom is the Jagaban of Africa,” Mr Udofia said.

Among the dignitaries on the stage at the rally were Mr Udofia’s running mate, Victor Antai, and Uloma, the wife of the former governor of Akwa Ibom, Godswill Akpabio.

Mr Akpabio, a former minister of Niger Delta Affairs, is running for the Senate under the APC in Akwa Ibom North West District.

Mr Udofia, in his remarks at the rally, occasionally attacked the Governor of Akwa Ibom State, Udom Emmanuel, and his Peoples Democratic Party-led administration.

“My greatest heart attack almost was the day Fashola, Bola Tinubu’s successor, sat down. Right beside him was his ‘successor’, Sanwo-Olu. And on that day, they signed a €350 million European Union grant.

“That same day our governor (Udom Emmanuel) was on Brekete TV. I hope you know what Brekete TV is? And you know what the European Union is? That is the level and the kind of governance that Bola Ahmed Tinubu represents. He is a man that creates a future for unborn Nigerians,” he said.

Apparently referring to the support Mr Akpabio gave in 2015 to get Mr Emmanuel elected as governor, Mr Udofia said Mr Akpabio made a “mistake” in 2015, and would correct that mistake by ensuring that the APC takes over Akwa Ibom in 2023.

“Eight years ago, the spirit of God left this (Akwa Ibom) state,” he said.

“When Godswill Akpabio was governor, he had only one partner, God. He did not have people running around, saying they are pastors. It’s only God that did it for him (Akpabio).

“God used him as a vehicle to prosper every one of you.”

The APC candidate assured the people that he would be on the ballot for the 2023 governorship election. He gave an insight into what his policy thrust would be in Akwa Ibom if he is elected governor.

“They’ll tell you, it’s a Muslim-Muslim ticket. But let me tell you, between Tinubu and Shettima, nobody loves Christians like them. Do you know that Tinubu’s wife is a Christian?”

Mr Udofia’s running mate, Mr Antai, said 2023 is the moment for the APC in Akwa Ibom.

“The time that people used to say that APC cannot win election in Akwa Ibom is over. This is our time.

“It does not matter how long they have maltreated APC in Akwa Ibom State. Everything that has a beginning must have an end,” he said.