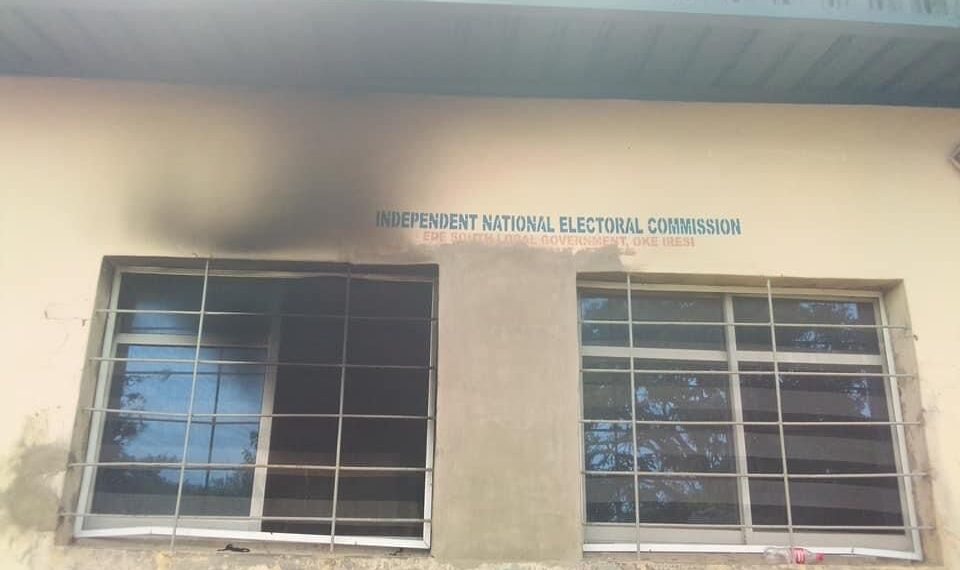 "Our PVCs are intact unlike in Ogun State where over 60,000 PVCs were lost but here in Ede, nothing was lost."

The Independent National Electoral Commission (INEC) on Friday said all its documents including permanent voter cards and sensitive materials used to conduct the recent election in Osun State were saved after some arsonists set ablaze the commission’s office in Ede, Osun State.

Mutiu Agboke, the Resident Electoral Commissioner in the state, speaking on Rave FM, Osogbo, denied some media reports that vital documents on the tribunal challenging the victory of Ademola Adeleke, governor-elect of the state, were destroyed in the inferno.

“As I am talking to you only our conference room was affected, anybody that wants to verify our claim should go there and see,” said Mr Adegoke.

“It is only our conference room in Ede. Our PVCs are intact unlike in Ogun State where over 60,000 PVCs were lost but here in Ede, nothing was lost.

“Anything relating to tribunal or cases or whatever will emanate from Abuja, if you want a CTC, you will get it from Abuja, or any document that you want that cannot be in local government it should be in the state office and our state office is very fortified, so it is not an issue at all.”

On Thursday, hoodlums suspected to be political thugs allegedly used petrol soaked in loaves of bread to set ablaze the commission’s office in Ede.

The incident happened hours after the INEC office in Abeokuta was equally set ablaze by suspected hoodlums.

In the radio programme monitored by our reporter, Mr Agboke said the arson was perpetrated by hoodlums on motorcycles who were armed with dangerous weapons.

“It is a holistic thing that the commission and the security agencies are going to look at.”

The electoral commissioner maintained that the arsonists escaped with their weapons when the police officers arrived at the scene to foil the attack.

“They tried to enter through the window of the conference room and as the people in the neighbourhood saw the smoke, they raised an alarm, the DPO of that place was alerted and he immediately drafted his men to the venue.

“Immediately they got there and they saw the security men, those guys disappeared, that was how the thing could not spread to all the department in the office.

“It was after they tactically repelled them that was when the security agencies were able to retrieve some of these exhibits, the loaf of bread, the knife, remnant of the petrol that was purportedly used for the inferno.”

Mr Agboke questioned the claims that loaves of bread soaked in fuel were used to ignite the fire, saying if they did, they wouldn’t have found them at the scene.

“We saw bread, we saw the leftover petrol,” he said.

“When I was talking to one of my mentors, he told me that we are not looking at it critically, we got there, we saw six loaves of bread on the floor, we saw the leftover of petrol and our argument was that they used the bread and the petrol to cause the inferno.

“If ordinarily they have used them we would not have been able to meet them.

“He was telling me that no, look beyond what you have seen, it means that they have only used that in Osun State in Ede to divert our attention, something else must have been used to cause the inferno.”

The REC charged security personnel to unravel the unseen on the issue.

“I think those are the areas security needs to channel their investigation and see,” he said.

He, however, noted that all the documents and sensitive materials kept within the office that was razed by fire have been moved to the commission’s head office.

“Yesterday, we evacuated it from that place to our head office because we don’t know what could happen again, so all those things we have moved them and they are in safe custody.”0

Mr Agboke appealed to residents of the state to cooperate with the commission.