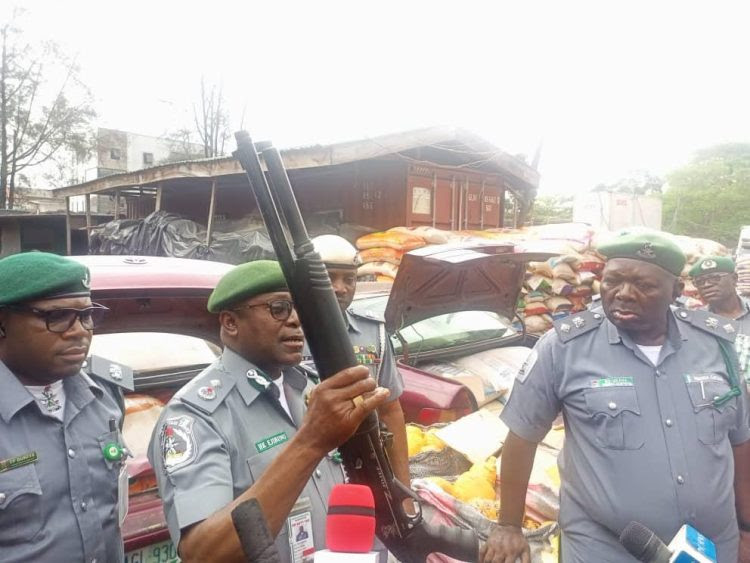 Comptroller Ejibunu with the intercepted gun

The official said the smugglers surrendered the gun and ran into the bush.

The Federal Operations Unit Zone A of the Nigeria Customs Service (NCS) has recovered one unit of pump action rifle, two units of locally made guns, and 35 live cartridges from smugglers in Idiroko, Ogun State.

The acting Comptroller, FOU, Zone A, Hussein Ejibunu, said this at a press conference to showcase the unit’s activities in September on Wednesday in Lagos.

Mr Ejibunu said the smugglers surrendered the weapons and ran into the bush when the officers of the unit engaged them. He assured that the suspected smugglers would be apprehended very soon.

“Chief among the September seizures was a massive discovery of 1,955 bales of used clothing in an abandoned building around the Lagos International Trade Fair Complex,” he said.

He added that within the same period, a large cache of PMS concealed inside sacks was intercepted in the Badagry Axis of Lagos State.

He added that five suspects were arrested in connection with some of the seizures.

According to him, the seizures had a total duty paid value of N622.4 million, and the unit recovered the sum of N107.8 million for the period under review.

He said the Federal High Court passed three judgements in favour of the unit on three criminal cases; securing the conviction of six people for being in possession of smuggled goods, while six civil suits against the unit were dismissed for lack of merit.

“The 1,955 bales of used clothing is the highest single seizure of used clothing made by the service this year and we have commenced investigation to know those behind this massive importation, and at what entry point these clothes came into the country.

“Used clothing in commercial quantity falls under absolute prohibition. They have been seized and we are on the trail of the smugglers to get them arrested.

“The smuggling of used clothes has economic and health implications for our people.

“The government in its wisdom wants the local textile industry to enjoy protection and create more jobs for Nigerians from the cotton farms through the textile and garment factories to our markets,” he said.

He said the serious health implication of textile smuggling was the exposure of users to skin diseases like scabies and fungal diseases, which could be transmitted by wearing unwashed second-hand clothes.

“This is coming when the world is wary of monkeypox whose mode of transmission includes clothing.

“The World Health Organisation fact sheet shows that ‘Monkeypox’ is transmitted to humans through close contact with an infected person or animal, or with material contaminated with the virus,” he explained. (NAN)