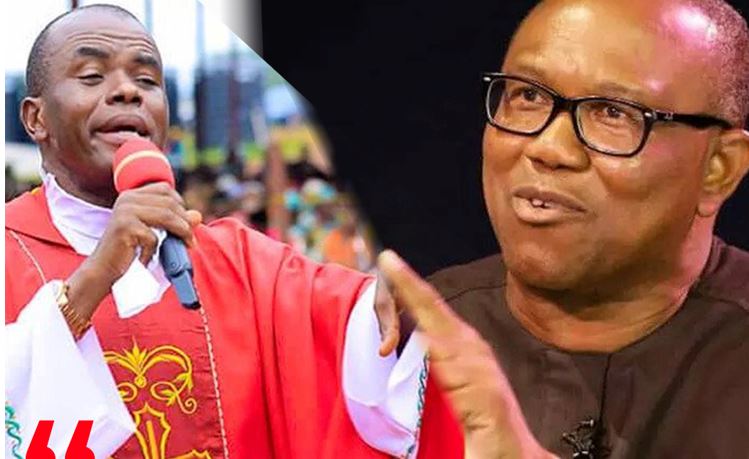 “I, Rev Fr Mbaka on that Sunday never mentioned Peter, not to talk of Obi.”

Mr Mbaka, had in June, prophesied that Mr Obi would not win the 2023 presidential election because he is a “stingy man”.

Many Nigerians, including the Catholic diocese of Enugu, criticised him over “the prophetic declaration” on the LP candidate.

The cleric later apologised to the former governor and his supporters, saying his intent was not to malign the LP candidate.

The Bishop of the diocese of Enugu, Callistus Onaga, later banned church members from attending services at the ministry, following the controversial prophecy.

The ban was lifted on Thursday, three months after.

Mr Mbaka was later directed by the leadership of Catholic Diocese of Enugu to embark on a “solitary journey” to a monastery.

The embattled cleric held a service at the ministry on Sunday to mark the “partial reopening” of the ministry and also announce Anthony Amadi, another Catholic priest, as the new spiritual director of the ministry.

Reports emerged later alleging that Mr Mbaka, during the Sunday service at the ministry, gave a fresh prophecy that the LP candidate would not win the presidential election in 2023.

But Mr Mbaka, in a video clip posted on the ministry’s official Facebook page on Wednesday morning, described the report as “nefarious and satanic”.

The cleric said he was shocked when he heard of the report after handing over the ministry to Mr Amadi, the new spiritual director.

“I, Rev Fr Mbaka on that Sunday never mentioned Peter, not to talk of Obi. Please, whoever is being used by the devil to blackmail me in the name of doing any job for anybody is satanic and should apologise, withdraw such nefarious, and satanic utterance and be careful when you want to harm the image of a man of God,” he said.

The priest said he had forgiven the person behind the report, but demanded that the person should apologise and withdraw the report against him.

He said the report was intended to “put the Adoration Ministry in trouble.”

No protest over journey to monastery

Mr Mbaka also announced that he had embarked on the journey to the monastery.

He urged his followers not to protest his trip to the monastery, explaining that his decision to temporarily relocate to the monastery was “in obedience to my Bishop, His Lordship Callistus Onaga,” whom he also asked to pray for him.

“Help me fellow adorers to stop any kind of protest that anybody will carry on my behalf to please me. Instead of the protest or demonstration helping me, it may jeopardise my priestly call,” he pleaded.

The cleric asked his followers to pray for him “so that I will go and embark on deeper reflection, sober contemplations and interior waiting on the Lord,” at the monastery.

“As a catholic priest, under the vow of obedience, I must obey the mother church.

“Please, in my absence don’t do anything that is awful, anything in any way, shape or form gives the devil iota of glory. Let us not fall into any trap that the devil has set,” Mr Mbaka said.

He asked his followers to “work, love and pray with” the new spiritual director, assuring that he would “soon” return to the ministry after his prayers at the monastery.

He did not, however, give an exact date of his return.

“I wish to inform you, fellow adorers, that this is not a time to be cantankerous, sorrowful, and angry unnecessarily,” he said.

“Use this opportunity to call on God for integral wellness and wellbeing of the adoration ministry, which is the apple of God’s eyes.”