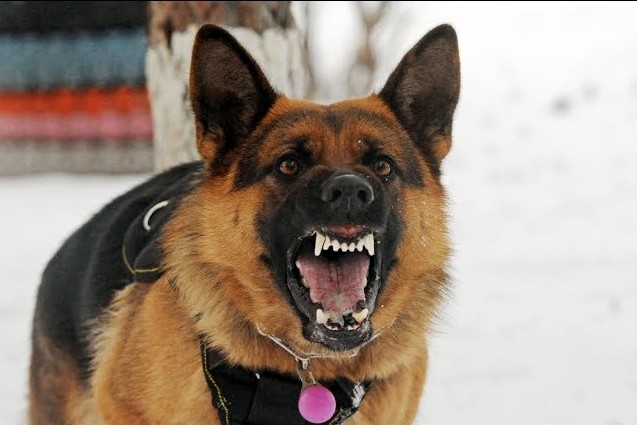 An angry german shepherd used to illustrate the story

“The man said the dogs gave his elder brother several bites all over his body," a police spokesperson said.

The police in Lagos State have begun an investigation into the death of a 36-year-old man allegedly mauled by two dogs belonging to a church in Lagos.

The Police Public Relations Officers (PPRO) of Lagos Command, Benjamin Hundeyin, confirmed the incident to the News Agency of Nigeria (NAN) in Lagos on Sunday.

Mr Hundeyin said that the younger brother of the victim reported the incident to the police in the Abule-Egba area of Lagos.

He said that on Tuesday at about 11.30 p.m., his elder brother was coming home and two ‘German dogs’ came out from the church premises and bounced on him.

“The man said the dogs gave his elder brother several bites all over his body. The police immediately visited the scene of the incident by detectives led by the Divisional Crime Officer.

“On arrival, the dogs were not seen. The victim was said to be rushed to Orile Agege General Hospital for treatment by the family.

“On getting to the hospital, it was discovered that the victim has given up the ghost. Family forcefully removed the corpse for burial according to Muslim rite,” he said.

The PPRO, therefore, advised members of the public to always cage and vaccinate their dogs.

“You are liable for any damage caused by your pets,” he warned.