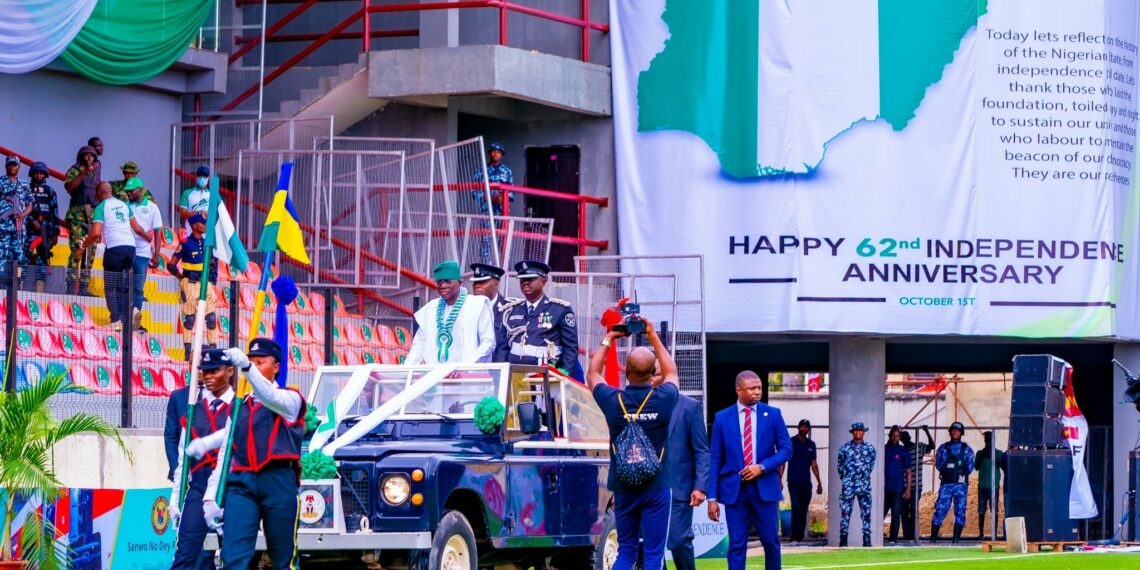 Governor Sanwo-Olu of Lagos State in a motorcade at the 62nd Independence Day Parade at the Mobolaji Johnson Arena, Onikan, on Saturday.

The governor said that every 1st October was a time to reflect on the journey of nationhood, to rededicate all to the task of nation-building.

Governor Babajide Sanwo-Olu of Lagos State on Saturday urged Nigerians to shun politics of division and bitterness, as the 2023 general elections approached.

The parade, held at the Mobolaji Johnson Arena, Onikan, was organised by the Lagos State Ministry of Home Affairs. 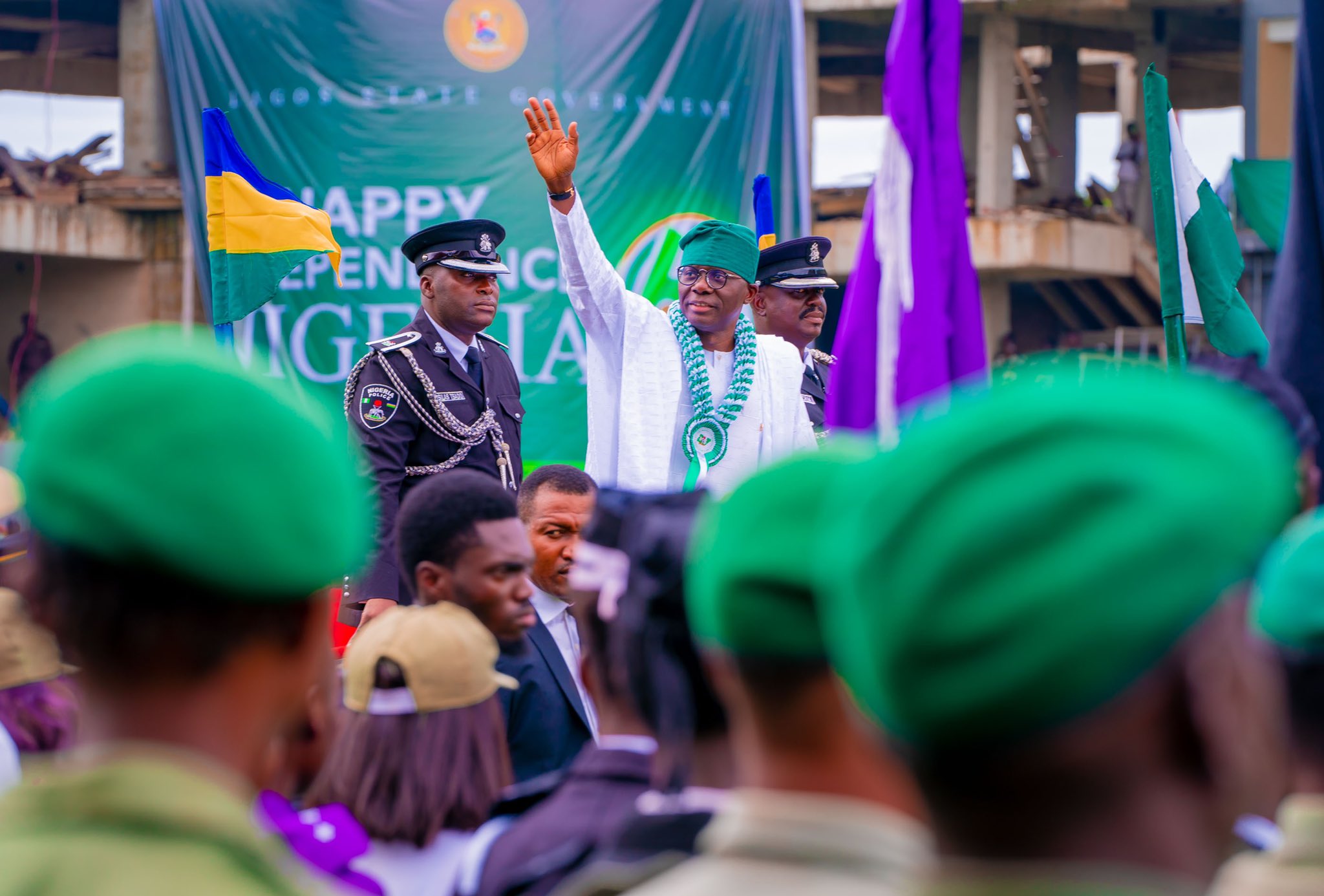 Mr Sanwo-Olu urged Nigerians to respect divergent opinions and know that the beauty of democracy lies in the fact that all would not share the same ideological and political views.

According to him, what Nigerians want, and what is not negotiable, is a better country.

He said the country had been blessed with an energetic population, resourceful and laden with entrepreneurial energy, a free and vibrant press, and a youth population that was increasingly politically aware.

Mr Sanwo-Olu said that Nigeria remained blessed with a democracy that was not complacent, and a thriving appetite among all the people for good governance. 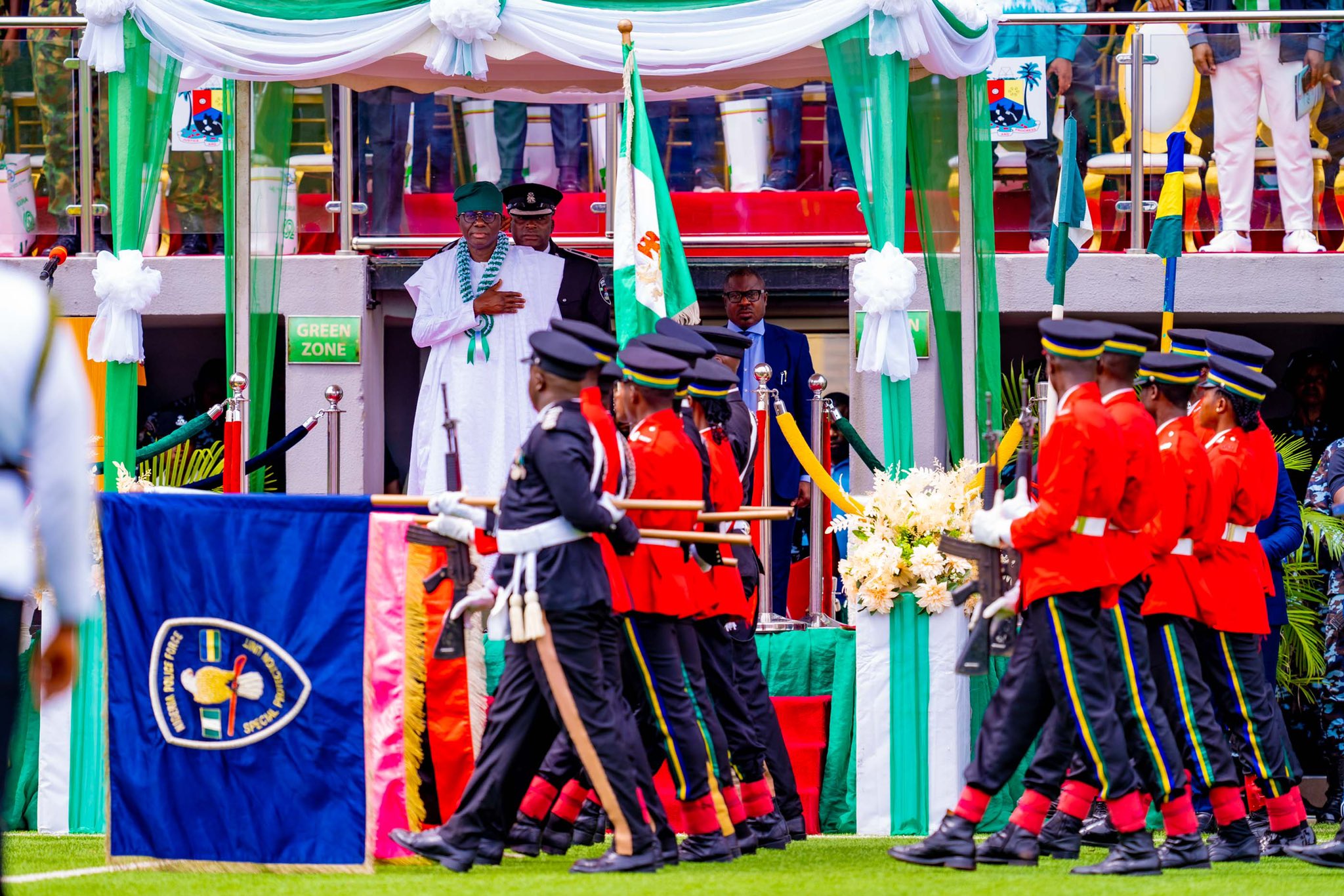 He said that all of these meant that all could look forward with hope to the future of Nigeria.

”I am personally fully persuaded and confident that Nigeria is on an irreversible march to greatness, economically, politically, socially, and culturally.

”There is no gainsaying that the world awaits the greatness of our nation; and by our collective efforts, we will rise above all odds and take our rightful place in history.

”Let me use this opportunity to commend the efforts of all of you our people who have remained resolute in commitment to ‘Project Nigeria’, despite the challenges our country is contending with.

”Today marks the 62nd independence anniversary of our dear country. On this day in 1960, the shackles of colonialism were broken and cast aside, and Nigeria joined the league of independent countries, the largest sovereign black power on the earth.

”Although we may not have fully attained the heights dreamt of by our founding fathers, we still have every reason to celebrate this historic day,” the governor said.

He said that every 1st October was a time to reflect on the journey of nationhood, to rededicate all to the task of nation-building, and continue to work hard at building a formidable nation in Africa and the world at large.

Mr Sanwo-Olu said the year 2022 also marked the 23rd year since the birth of the 4th Republic, the most successful democratic journey in the history of the nation, Nigeria.

According to him, Nigerians truly have a lot to be grateful for, as, amidst many odds and challenges, all have continued to exist as one strong country, recording progress on many fronts.

”Even if we are not always where we will like to be as a nation, there are clear signs of slow and steady progress,” he said.

The programme featured an inspection of a parade by various groups which included Nigeria Police, Civil Defence, paramilitary, voluntary organisations, school pupils, and students by the governor, cutting of the 62nd Independence anniversary cake, among others. (NAN)