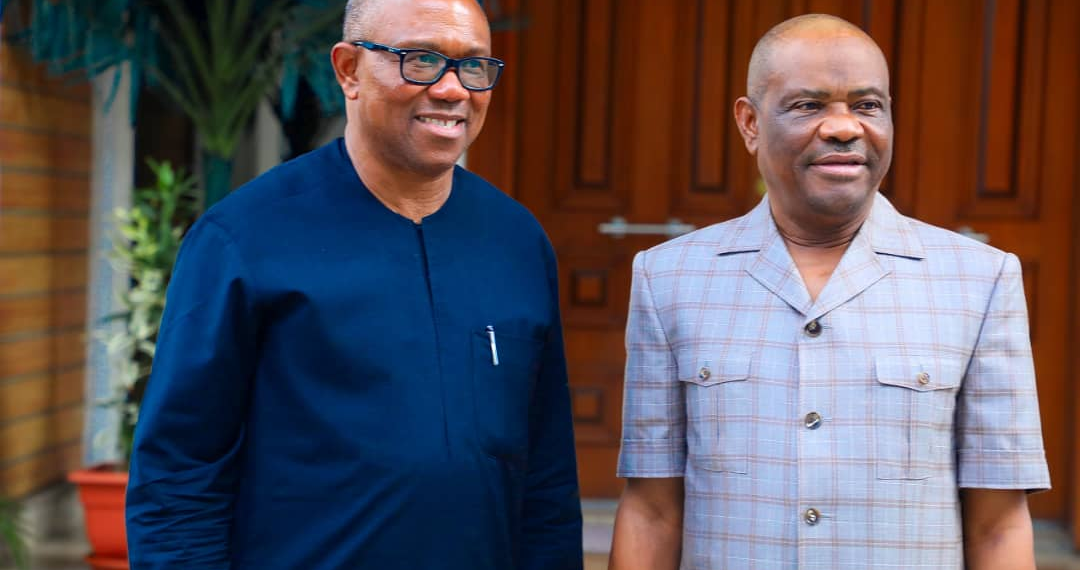 It is being speculated that the LP candidate may be seeking Governor Wike's political support for his presidential ambition.

Mr Obi’s Friday visit came barely 48 hours after the commencement of the presidential campaigns ahead of the 2023 general elections.

The LP candidate met with Mr Wike behind closed doors at the governor’s residence in Obio-Akpor Local Government Area of the state.

“Earlier today, I visited @GovWike in Port Harcourt. As usual, I was very well received with genuine warmth and fraternal affection,” Mr Obi posted on his verified Twitter handle on Friday.

Messrs Obi and Wike did not speak with journalists after the meeting.

There are speculations that the LP candidate may have visited Mr Wike to seek his support ahead of the 2023 presidential election.

“It was nice hosting my brother @PeterObi once again,” Mr Wike posted on his Twitter handle on Friday.

Mr Wike was a presidential aspirant of the Peoples Democratic Party (PDP).

He lost the party’s presidential primary in May to Nigeria’s former vice president, Atiku Abubakar.

Mr Obi, who was Atiku’s running mate in the PDP in the 2019 presidential election, was among the PDP presidential aspirants this year.

He, however, announced his resignation from the PDP a few days to the party presidential primary, saying there were practices in the party that were inconsistent with his “belief and persona”.

He defected to the LP where he later emerged the party’s 2023 presidential candidate.

Mr Wike had criticised Mr Obi for the decision and accused the former governor of lacking “character and integrity”.

But both politicians appear to have become closer to each other after the PDP primary election.

This is the third time the duo would hold a meeting behind closed doors since the primary.

Mr Obi first visited and had a closed-door meeting with the Rivers governor on 22 June.

The latest visit comes amidst a raging crisis in the PDP.

Mr Wike is engaged in a political battle with the PDP presidential candidate, Atiku, over the Rivers governor’s demand that the PDP National Chairman, Iyorchia Ayu, relinquish his position for the sake of a “regional balance”.

Aggrieved after the primary election, Mr Wike accused the party of betraying him and breaching its constitution.

He is insisting that the resignation of Mr Ayu is a criterion that must be met before he discusses giving support to Atiku in next year’s poll.

Mr Wike’s argument is that both Mr Ayu and Atiku hail from northern Nigeria.