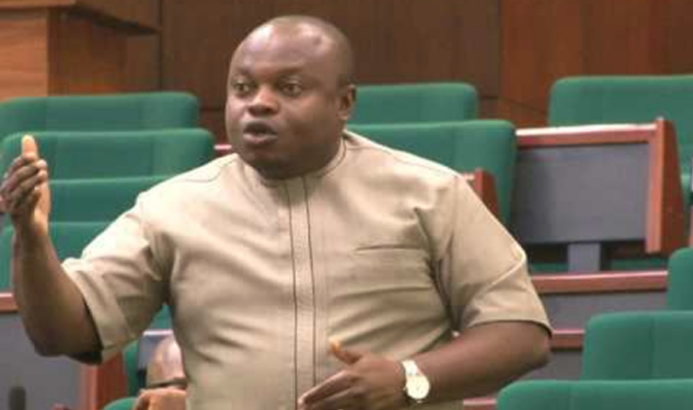 In the list released by INEC on 20 September, Mr Gbillah was listed as a senatorial candidate of the Labour Party and New Nigeria Peoples Party for Benue Northwest (Zone B) senatorial district.

Mark Gbillah, a member of the House of Representatives, representing Gwer East/Gwer West federal constituency of Benue State, says he has instituted a suit against the Independent National Electoral Commission (INEC) for listing him as the candidate of two political parties.

In the list released by INEC on 20 September, Mr Gbillah was listed as a senatorial candidate of the Labour Party and New Nigeria Peoples Party for Benue Northwest (Zone B) senatorial district.

Mr Gbillah, while briefing journalists on Friday at the National Assembly, said INEC erroneously listed him as the candidate of the two parties, despite withdrawing as the candidate of the NNPP as provided by the Electoral Act adding that he subsequently joined the Labour Party, where he participated in a primary election for his senatorial district.

He explained that he has instituted a case against the electoral umpire to address the duplication of his name on the lists of the two parties.

At the briefing, Mr Gbillah provided his resignation letter from the NNPP and his withdrawal as senatorial candidate from the party. Both letters are dated 5 July.

The lawmaker also presented an affidavit he deposed to at the Federal High Court, Abuja, stating his withdrawal as the candidate of the NNPP.

Furthermore, Mr Gbillah provided the report of INEC that monitored the primaries that produced Ako Francis as the candidate of NNPP for the Senatorial District.

Position of the law on withdrawal

The Electoral Act 2022 makes provisions for the withdrawal of a candidate and the conditions for such withdrawal.

Section 31 of the Act provides that “a candidate may withdraw his/her candidature by a notice in writing signed by him and delivered personally by the candidate to the political party that nominated him for such election and the political party shall convey such withdrawal to the commission not later than 90 days to the election.”

However, Section 115(1) (d) of the Act provides that any person who signs a nomination paper or result form as a candidate in more than one constituency at the same election commits an offence and is liable on conviction to a term of imprisonment.”

I remain candidate of LP

Commenting on being a double candidate, Mr Gbillah said he cannot be responsible for the inability of NNPP to replace him as a candidate.

“While it is true that INEC’s publication on 20th September 2022 of the list of National Elections (Presidential, Senate and House of Representatives) candidates for the 2023 general elections indicated my name as the candidate for both Labour Party and New Nigeria Peoples Party (NNPP) for the Benue North-West Senatorial District Elections, this publication was erroneous and without my knowledge and I have since initiated necessary legal action against INEC and NNPP in order to correct this grievous error which is alleged to have occurred because of NNPP’S inability to upload the name of their replacement candidate to the INEC portal within the timeline provided by INEC,” he said.

Mr Gbillah disclosed that “Labour Party rescheduled senatorial primaries for Benue North-West Senatorial District held on 11th July 2022 where I was returned elected unopposed as the Labour Party candidate for the election.”

When contacted via text message, Rotimi Oyekanmi, the spokesperson of INEC’s Chairman, promised to get the position of INEC across to PREMIUM TIMES but had not done so at the time of filing this report.