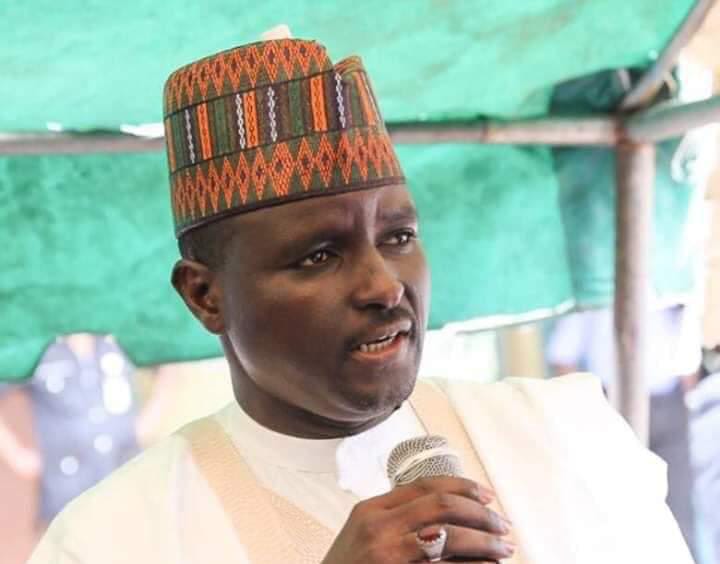 The senatorial candidate of the All Progressives Congress (APC) for Yobe North District, Bashir Machina

The judge rule that the case was not status barred as it was filed within the 14 days window provided by the law.

Ibrahim Bawa, the counsel to the All Progressives Congress (APC) senatorial candidate of Yobe North, Bashir Machina, has described the court ruling which named his client as the true candidate of the party for the district as “courageous”.

Mr Bawa told journalists on Wednesday at the court premises that the ruling of Fadima Aminu, the judge, strengthened his trust in the Nigerian judicial system.

Mr Machina had approached the court seeking an order to declare him the winner and the Yobe North APC primary conducted on 28 May.

He also asked the court to compel his party to send his name to the Independent National Electoral Commission (INEC) as its candidate for the district and for INEC to publish his name in the list of cleared candidates for the National Assembly election next year.

The APC leadership had sent the name of the incumbent Senate President, Ahmad Lawan, as its candidate.

Mr Lawan did not participate in the INEC-supervised primary of 28 May.

Mr Lawan had contested unsuccessfully in the party’s presidential primary. Having failed to secure the presidential ticket, he convinced the party leadership to name him as the candidate of the party in the district he has represented in the Senate since 2007.

“When you talk of justice, it’s a clear indication that justice does not have a face. You see the symbol of Justice, it does not look at anybody before giving judgment. I will say that the judge has just done what she ought to do. This is justice. I must commend the honourable judge for her courageous decision,” Mr Bawa said.

“This type of judgement has given everyone hope in the judiciary. As they always say, the judiciary is the hope of the common man. So, anybody can get justice in a court of law. It doesn’t matter who you are. The law will always vindicate the innocent and punish the offenders. This will also give confidence and boost our electoral process.

“I am extremely happy. You know that anyone that is victorious is naturally happy. Even if he is crying, it is called tears of joy. We are happy because we are victorious,” Mr Bawa said.

In her judgement, Mrs Aminu first considered the preliminary objections by the defence lawyer that the case was status barred and if there was a cause of action by the plaintiff.

Ruling in favour of the plaintiff, Mr Machina, the judge, who relied on established legal authorities, stated that the objections were “faulty miss-leading and therefore cannot rob the court of its function of entertaining the substantive matter”.

On the issue of the case being filled out of time, Mrs Aminu ruled that the cause of action in the case started counting from 17 June when Mr Machina discovered that the second defendant Ahmad Lawan and the first defendant, APC was planning to remove his name and not the date the primary election was conducted on the 28/05/2022 which the plaintiff won.

She explained that the plaintiff, having approached the court on 22 June, after being aware of his party’s decision on 17/06/2022, therefore, met the condition of the law and did not violate the 14 days notice required by the constitution.

In her ruling on the substantive matter, the judge held that:

“The first defendant is hereby ordered to prepare the name and details of the plaintiff to the third defendant (INEC) as its rightful candidate. This is my decision,” she ordered.