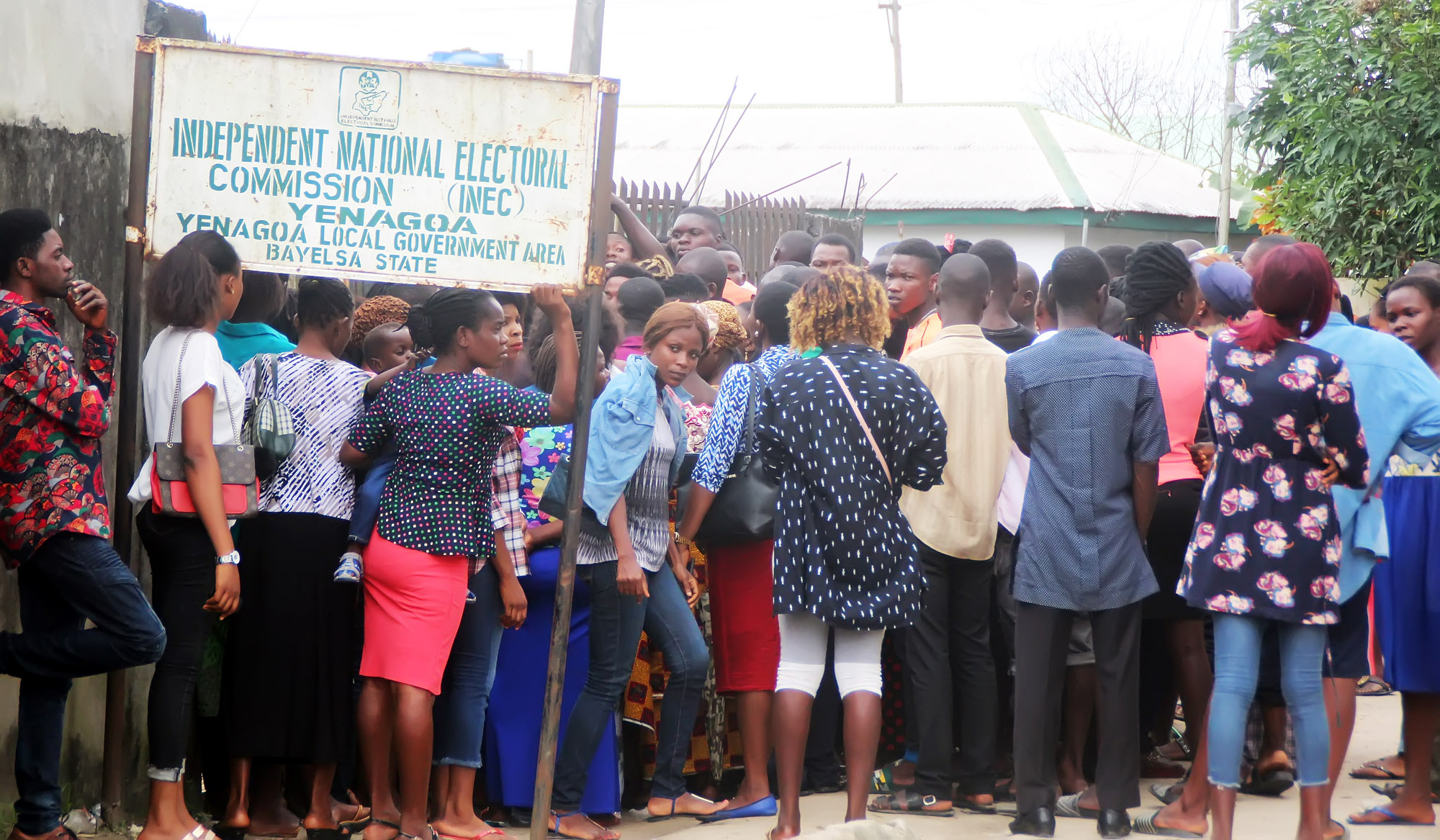 FILE: People waiting to be registered for Permanent Voters Card (PVC) at the INEC office

She said it was the commission’s poor communication during the exercise that resulted in the multiple registrations and other infractions and their subsequent delisting from the voters’ register.

Ms Mbamalu stated this when she featured on PREMIUM TIMES’ Twitter Spaces on Wednesday.

The online event explored challenges and INEC’s readiness for the 2023 general elections with respect to the number of registered voters.

Its National Commissioner and Chairman Voters Education Committee, Festus Okoye, in a statement, said the clean-up of the register by the Automated Biometric Identification System (AIBS), showed that the over one million registrants did not meet standards.

Ms Mbamalu, said most people who wanted to transfer their Permanent Voters’ Card (PVC) to other locations, registered for new PVC, hence the prevalence of multiple registrations.

She said the commission did not give sufficient communication to Nigerians on steps to avoid double registration. The awareness campaign, she argued, would have ensured that the lapses were avoided.

“There is the part of communicating with people. We did not see a lot of vigour in communication across board. This is why some people, rather than transferring the old data, were doing new registration. And today, you have INEC giving us data of the deletion of names. Some of them were due to the lack of information,” she said.

The Yiaga director also said that the inability of the electoral umpire to decentralise CVR centres prevented so many people from doing the registration or completing the process.

She added that insecurity in some parts of the country, specifically the South-east and North-west, hindered many from registering.

Ms Mbamalu stated that INEC later realised the challenges with the local government registration centre and decentralised in some places, but that happened very late towards the end of the exercise.

“For individuals, who think about the trip, the fact that you have to travel that long to register without the guarantee that if you get there on that particular day, you will be able to complete the registration because of the number of persons there………

“You can imagine some people making the trip more than once. So, one of the challenges was that we did not have enough materials to ensure the decentralization of the process to bring it closer to the people. Towards the end, INEC identified some wards and they had a rotational process. Imagine if it began early, it would have encouraged the people,” she said.

The spokesperson of Coalition of United Political Parties (CUPP), Mark Adebayo, while speaking on INEC’s registration process said the group discovered several flaws in the data, hence its decision to raise alarm on the possible compromise of the electoral system.

PREMIUM TIMES had reported that CUPP raised alarm on foreign names in INEC’s voters register and mismatch of names and pictures.

Mr Adebayo said the evidence by the group has been presented to the public, however, he commended INEC for its swift response to the issues raised by them.

He also commended the electoral body for the deployment of technology in the management of elections in the country, noting that positive results are already being seen by the public.

“I want to commend INEC because their investment in technology is paying off already, and the proactive responses to complaints and observation have been unprecedented, and to that, on behalf of CUPP, I want to say that INEC has really improved from what it used to be in 2015 and 2019. I know that as they said, they are going to clean up the registrar,” Mr Adebayo said.

Victor Aluko, INEC’s director of voter education and publicity, in his brief appearance on the space, noted that there is an ongoing clean-up of the register which will address some of the concerns raised about foreigners.

“The commission now is working assiduously to clean up the registration that was done by not less than 12 million Nigeria. Already, we have 84 million before, when we are done with the process, we will have more,” he said.