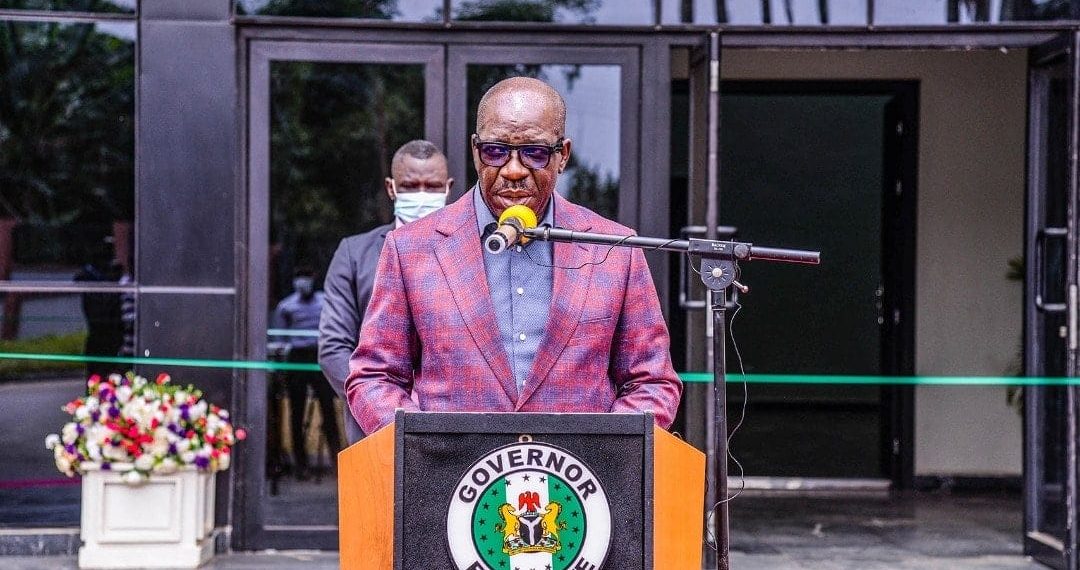 The government says the measure is to cut wastage and eliminate duplication of functions.

Edo State Governor, Godwin Obaseki, has approved a restructuring that will reduce the number of government’s ministries, departments and agencies by over 31 per cent.

The Commissioner for Communication and Orientation, Andrew Emwanta, disclosed this on Wednesday while briefing reporters after the State Executive Council Meeting.

The measure, Mr Emwanta said, is to cut wastages in government and eliminate duplication of functions, but did not state if it will lead to job loss.

Under the new arrangements, the state government has slashed the number of ministries from 22 to 18.

Also, government departments and agencies, otherwise known as MDA, have been reduced from 105 to 72.

“At today’s EXCO meeting, the Council received a memo from the office of the Secretary to the State Government which was presented by the Head of Service, Anthony Okungbowa, for the restructuring and rationalisation of Ministries, Departments and Agencies (MDAs) in Edo and was graciously approved by the Council.

“The details of this memo include the reduction of ministries from 22 to 18 and the reduction of MDAs from 105 to 72. The idea behind this is to reduce wastage and avoid duplication of functions especially when we have an economic situation that requires prudence on the part of the government.

“So, if at the federal level there is this talk of reducing its bureaucracy and MDAs, Edo State is now blazing a trail in walking the talk. Towards this end, a new office has been created, the office of special duties to be headed by a commissioner.”

Mr Emwanta said the government action was due to the present economic situation in the country.

Besides the security challenges bedevilling the country, Nigeria is also facing a harsh economic situation with inflation rates skyrocketing to a 17-year high.

The National Bureau of Statistics (NBS) last week released the new inflation rate which raises concerns for the country’s economy.

According to the NBS, Nigeria’s inflation rate increased from 19.64 per cent recorded in July to 20.52 per cent in August, the highest since September 2005.

Edo is the fourth state with the highest external debt after Lagos, Kaduna and Cross River.

The State Communications Commissioner said the new measures will allow for a leaner government and reduce the size of governance.

Bagauda Kaltho: The many lies of Zakari Biu and Mahdi Shehu, By Management of TheNEWS and PM NEWS