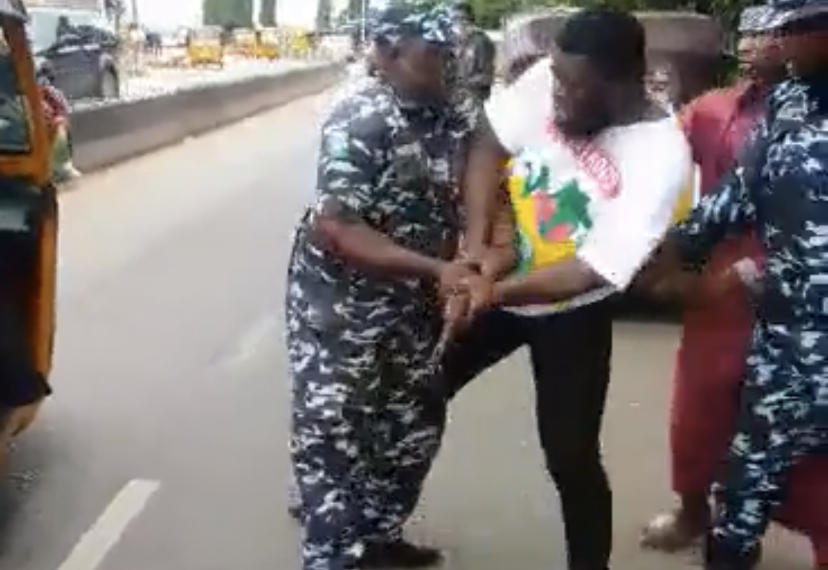 A civilian dragging a rifle with a police officer

Police react to video of civilians assaulting officers in uniform

“Where a public officer acts contrary to the provisions of extant laws, there are channels to report such conduct and get prompt justice, particularly in the Nigeria Police Force."

The police have reacted to the trending video of some civilians trying to collect a rifle from a police officer in Lagos.

The Force spokesperson, Muyiwa Adejobi, in a statement on Monday said that if the police officers erred, the yet-to-be-identified individuals ought to have reported to the appropriate authority and not resort to “self-help.”

In the video, two men were seen in a heated argument with the police officers. One of them could be seen trying to collect a rifle from a police officer and shouting “where is my phone?”

“The Force Public Relations Officer reacted to a trending video where some individuals grievously assaulting a police officer, and attempting to disarm the officer by dragging his loaded AK47 rifle, restated the law on serious assault as enshrined on Section 356 (2) of the Criminal Code Act of Southern Nigeria with explanations,” the statement read.

“However, some media platforms deliberately misquoted it as endorsing violence by uniformed officers against members of the public.

“Where a public officer acts contrary to the provisions of extant laws, there are channels to report such conduct and get prompt justice, particularly in the Nigeria Police Force.

“In the extant case, the individuals resorted to self-help and assaulted the officers, attempted to snatch the officers’ firearm, and in so doing breached the law. It is trite that two wrongs cannot make a right, as such whatever the provocation, the action of the individuals were wrong in all ramifications as they would have reported the matter for prompt action.

Mr Adejobi also said that it is criminal and disrespectful to “pounce on and beat” law enforcement agents.