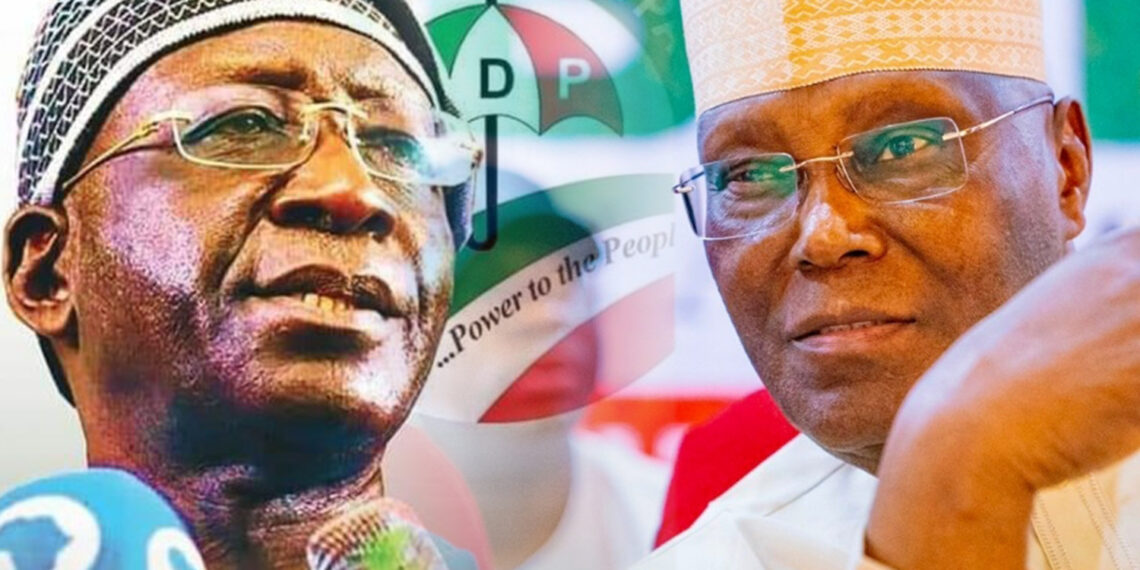 “Thus we appeal to HE Nyesom Wike to accept the recent resolution of the NEC of our great party reaffirming confidence in the National Chairman of the Party in good faith no matter how he and his supporters may view the resolution to be at variance with their desires and aspirations.”

A group, the Peoples Democratic Party Reps Aspirants Forum (RAF), has appealed with Governor Nyesom Wike and his supporters to allow peace to reign in the party in order to ensure the victory of the party in the 2023 presidential election.

The group made the appeal at a press conference in Abuja on Sunday, during which it pledged to mobilise voters for the party’s presidential candidate, Atiku Abubakar, in the 360 federal constituencies.

Mr Wike and some members of the PDP, including about four governors, have been demanding the resignation of the party’s National Chairman, Iyorchia Ayu, in order to correct the imbalance in its leadership.

They said with the emergence of Atiku, a northerner as the PDP presidential candidate, Mr Ayu, also a northerner, should resign to pave way for a southerner to occupy the position.

Atiku, a former vice president, had defeated Mr Nyesom and 11 others in the presidential primary election of the party held in May and went ahead to pick Governor Ifeanyi Okowa, as his running mate instead of the Rivers governor, who came second in the election.

Since then the main opposition party has been enmeshed in crisis with the quest by Mr Wike supporters, who believe the governor was betrayed, that the national chairman must go.

However, at its recent meeting, the National Executive Committee (NEC) of the party, passed a vote of confidence on the national chairman and other members of the national working committee.

Also, last week, at a meeting with the South-west chapter of the PDP, Atiku said though Mr Ayu’s removal is achievable, the party’s constitution, rules, regulations and procedure must be adhered to.

Last Thursday, Mr Wike and the other governors in his camp were appointed into the Presidential Campaign Council (PCC). None of them has kicked against their inclusion so far.

RAF, which is an umbrella body of all House of Representatives aspirants from all states of the federation who aspired but lost out in the recently concluded PDP primary elections across the 360 federal constituencies of the country, asked the Wike’s camp to accept the resolution of the NEC.

“Thus we appeal to HE Nyesom Wike to accept the recent resolution of the National Executive Committee (NEC) of our great party reaffirming confidence in the National Chairman of the Party in good faith no matter how he and his supporters may view the resolution to be at variance with their desires and aspirations. Democracy demands that we tolerate developments that may be personally disagreeable to us but popular with the majority,” the forum’s National Chairman, Danjuma Muhammad, said.

“We appreciate the efforts and pragmatism shown by HE, Atiku Abubakar and other well-meaning members of the party to dialogue with HE, Gov. Nyesom Wike and his group and we are urge that this dialogue should continue to be sustained until we achieve consensus and unity in facing the arduous task of dislodging the most incompetent political party in recent memory anywhere in the world from continuing to ruin and endanger the very existence of our country.

“We want to join our voices to call on HE, Gov. Nyesom Wike and his group that their grievances and demand for fair inclusion are well noted and it is time for them to please sheath their sword. No matter the bitterness, no matter the grievances we are better united under one umbrella to deliver PDP for Nigeria.”

The group reminded Mr Wike that as he repeatedly implied, “it is better to fight in your father’s house because you have the right of claims than to go slave in another man’s house.”

It added, “Not all that glitters is gold! This is a clarion call to services, we owe ourselves, we owe our children, we owe generation yet unborn to act to save Nigeria from sinking. Posterity will judge us not only for our actions, but also for our inaction. Let us all join hands and deliver Atiku and Okowa for Nigeria. Let us return power back to the people.”