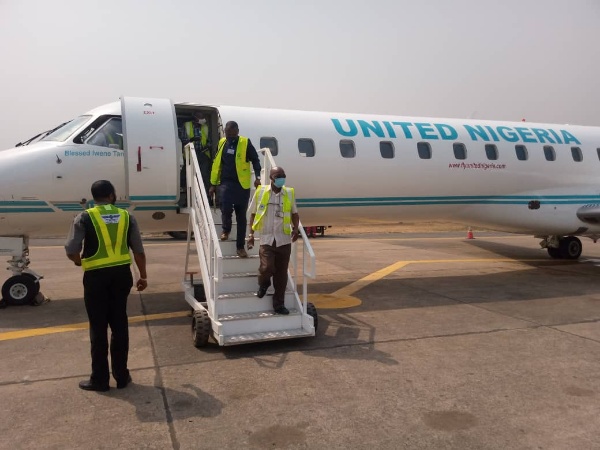 “During preflight inspection this morning, a stowaway was found in one of our aircraft parked at MMA2 Ikeja."

The management of United Nigeria Airways says a middle-aged man was apprehended and taken for interrogation after he was found on a parked aircraft in the early hours of Sunday.

Achillus Chud-Uchegbu, the airline’s spokesman, said this in a statement on Sunday in Lagos.

Mr Chud-Uchegbu said that the unidentified man was unconscious and discovered during the preflight inspection while the aircraft was now being screened and prepared for service after the alleged stowaway was taken away.

The spokesman revealed that due to the breach, some flights might be affected as the airline would have to be rescheduled to accommodate the investigation.

The statement said; “During preflight inspection this morning, a stowaway was found in one of our aircraft parked at MMA2 Ikeja.

“The middle-aged man, who looked unkempt and is suspected to be unconscious, was arrested and taken in for interrogation.”

The aircraft last operated Abuja-Lagos at 7.30 p.m. on September 3 and was securely parked at the apron following a post-flight inspection.

“FAAN AVSEC and Bicourtney security services are on ground and investigation has opened into this security breach at MMA2.

“The affected aircraft is being screened and prepared for service in accordance with United Nigeria Airlines strict security and operating standards.

“Meanwhile, the development will result in rescheduling of some flights to accommodate the investigations.

“We regret the delay this incident will cause our esteemed customers whose scheduled flight will be affected.” the statement ended.