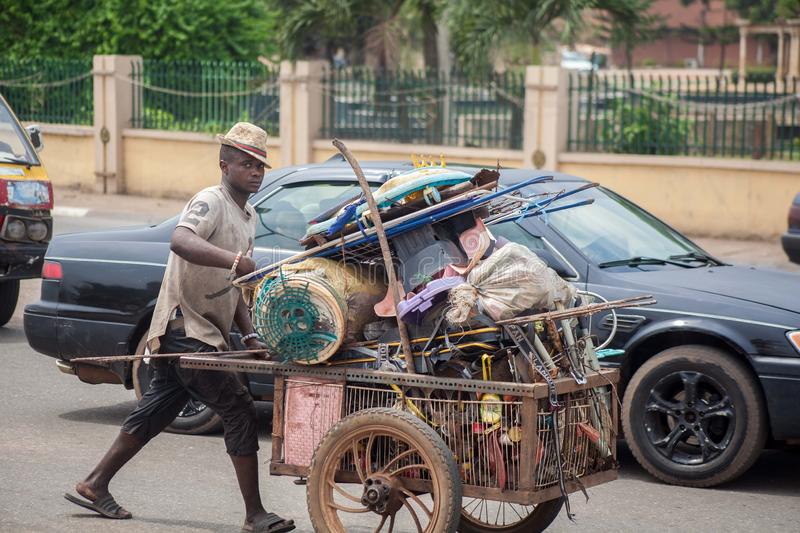 A scrap collector used to illustrate the story

The scrap collector died while he was attempting to steal electrical cables from a transformer in the area.

The scrap collector died while he was attempting to steal electrical cables from a transformer in the area.

The incident happened on Monday evening when electricity was suddenly restored to the transformer.

A source said a loud explosive sound was heard at about 3:47 p.m. when power was restored to the area.

The sound prompted residents of the area to call on officials of the Ibadan Electricity Distribution Company (IBEDC) to verify the cause of the sound.

In response to the call, the body of the scrap collector was found hanging on the transformer fence with burnt fingers.

A bag containing the scraps he had collected was also found on the floor beside him.

Yemisi Opalola, the police spokesperson in the state, confirmed the incident.

Mrs Opalola said the corpse has been deposited at the state mortuary.

“A staff of IBEDC Osogbo reported that based upon information received in his office a man suspected to be a thief in his attempt to vandalized and commit felony inside transformer at GOF International School area of Osogbo was electrocuted and died. As a result of this, mere examination proved him to be a scrap picker,” Mrs Opalola said.

“Meanwhile, the corpse has been removed and deposited in the state mortuary. Names and relatives are yet unknown. Further development will be communicated,” she added.