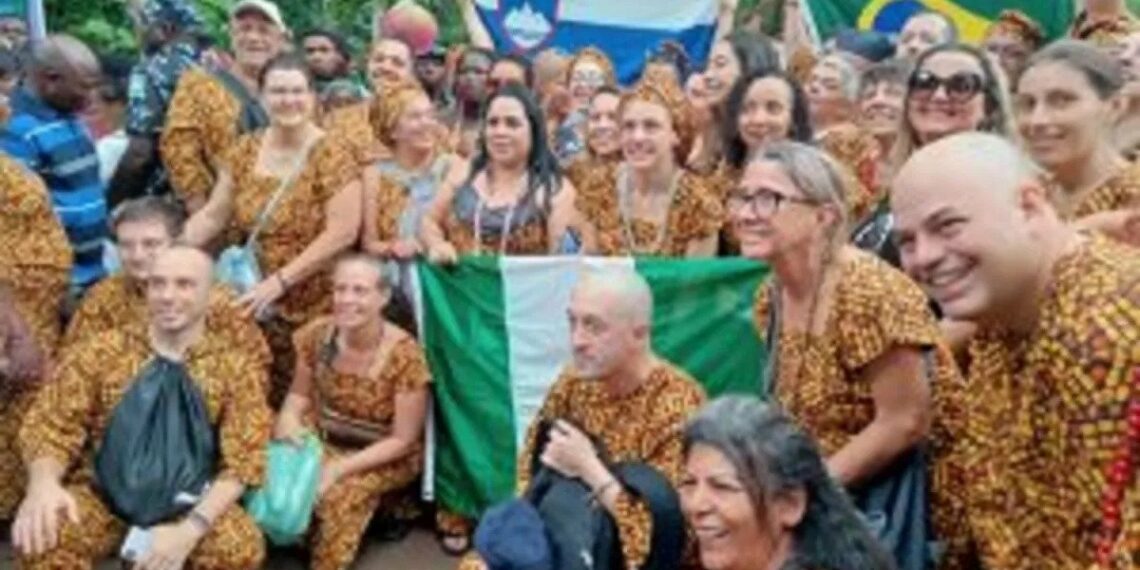 A Brazilian, Regina Alberto, said she was in Osun specifically for the festival as a devotee of the Yoruba Orisa worship.

Some foreign devotees at the just concluded Osun-Osogbo festival have expressed belief in the sanctity of the Osun deity, saying the annual fiesta offers an opportunity for worship through the sacred grove.

The tourists, who spoke with the News Agency of Nigeria (NAN) on the sidelines of the grand finale of the festival in Osogbo, said the event gave them joy and a sense of belonging in the worship of the Osun goddess.

A Brazilian, Regina Alberto, said she was in Osun specifically for the festival as a devotee of the Yoruba Orisa worship.

NAN reports that Mrs Alberto is a member of the Oduduwa Worldwide Group, a Diaspora socio-cultural organisation committed to the promotion of Yoruba culture, tradition, and worship.

NAN also reports that no fewer than 50 members of the group were sighted at the sacred grove during Friday’s grand finale.

Mrs Alberto, who said this was her second outing at the festival, said that her group had been coming to the festival since 2011.

“I am from Brazil. I am with Oduduwa Brazil, which is part of Oduduwa Worldwide Group.

“The Osun-Osogbo festival is very important to us because in Brazil we praise Orisa diety and being here and seeing everyone praying and worshipping, just like we try to do is so emotional.

“The energy is so powerful, it is really hard not to cry,” she said.

Mrs Alberto said the understanding of her group that the source and worship point of the Osun goddess was located at the Osun-Osogbo grove spurred its interest in the festival.

She said the festival gave members of the visiting devotees joy to be in the company of indigenous devotees and others from around the world to celebrate the Osun goddess.

Also speaking with NAN, a German, Johnnnes Wollbold, said he was in Osun to study Yoruba culture and take part in the Osun-Osogbo festival.

Mr Wollbold said the study would give him a comprehensive report on the lives and nature of Osogbo people.

Mr Wollbold, who said he came from Weimer Germany, said he was working in partnership with Jungle Communication Centre(JCC) to study African philosophy vis-a-vis Yoruba culture.

He said he had been to Nigeria three times in the 90s and took part in the Osun-Osogbo festival in 1995.

“I am here to study Yoruba/West African culture, the music, drumming, dancing and African philosophy.

“The Yoruba culture is not individualistic, often the Yoruba celebrate together and the Osun festival brings people together.

“The festival afforded me the opportunity to understand how the Yoruba people mix together, their contact with nature and harmony between nature and humans, and not forgetting their roots.

“The Osun festival is the joy of life. I see people in their everyday life, joyful and I love the celebration.

”I like the Yoruba people. They are friendly. They are not individualistic. As a German-European , I will, however, like them to stay peaceful.

“There is a senseless war in Europe between Russia and Ukraine which is crazy, so I will advise Nigerians to learn to settle their differences and stay peaceful,” he said. (NAN)