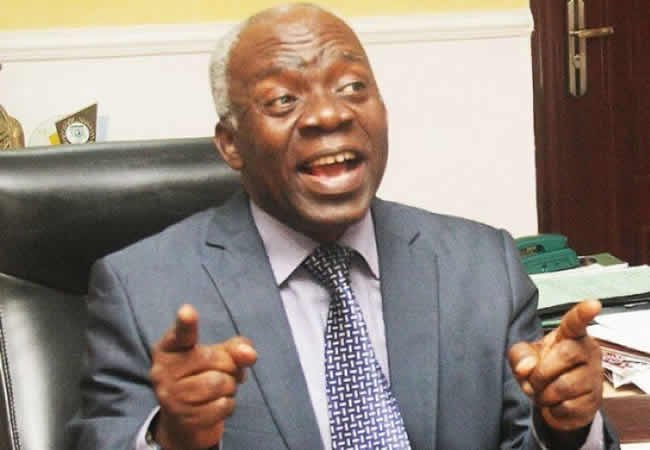 “Enough of health tourism. Anybody who holds public office must be treated in Nigeria for any health challenge. Public office holders must die here."

Human rights activist and Senior Advocate of Nigeria, Femi Falana, has said that all public office holders with health challenges should be treated in government-owned hospitals.

Mr Falana made the call at the first anniversary of the late Mohammed Fawehinmi Lecture and Book Presentation in Lagos on Thursday.

The News Agency of Nigeria (NAN) reports that the late Mohammed Fawehinmi, eldest son of the legal icon and human rights activist, Gani Fawehinmi, died on 11th August 2021, at age 52.

He advocated a law barring all public office holders from travelling out of the country on health grounds.

“Enough of health tourism. Anybody who holds public office must be treated in Nigeria for any health challenge. Public office holders must die here,” he said.

Mr Falana commended Vice President Yemi Osinbajo for undergoing knee surgery in one of the hospitals in the country and called on the government to pay more attention to developing the health sector.

Speaking on the theme: “Nigerian Masses And The Election”, Mr Falana said the business of the 2023 general election should not be taken as a joke.

He advised the people to challenge their various candidates on salient issues, noting that the 2023 general election was beyond religion and ethnicity.

“The business of next year is not a joke. The people must challenge their parties to address the various issues the country is facing.

“Questions should be asked on health issues, Academic Staff Union of University strike, insecurity, economy and their position on all these issues and how they plan to end them for good.

“I don’t care which party you belong to; what is important is that people should ask questions and reject the high living conditions in the country,” he said

The human rights activist also urged the Federal Government to address the issue of the exchange rate which had become worrisome.

He described the late Mohammed Fawehinmi as a defender of the masses, who despite his physical challenge, contributed his quota to the development of the country.

”Mohammed lived a life worthy of commendation and impacted so many lives positively.

”He kept the flag flying doing justice just like his father, a great Nigerian and a passionate human rights activist,” Mr Falana said.