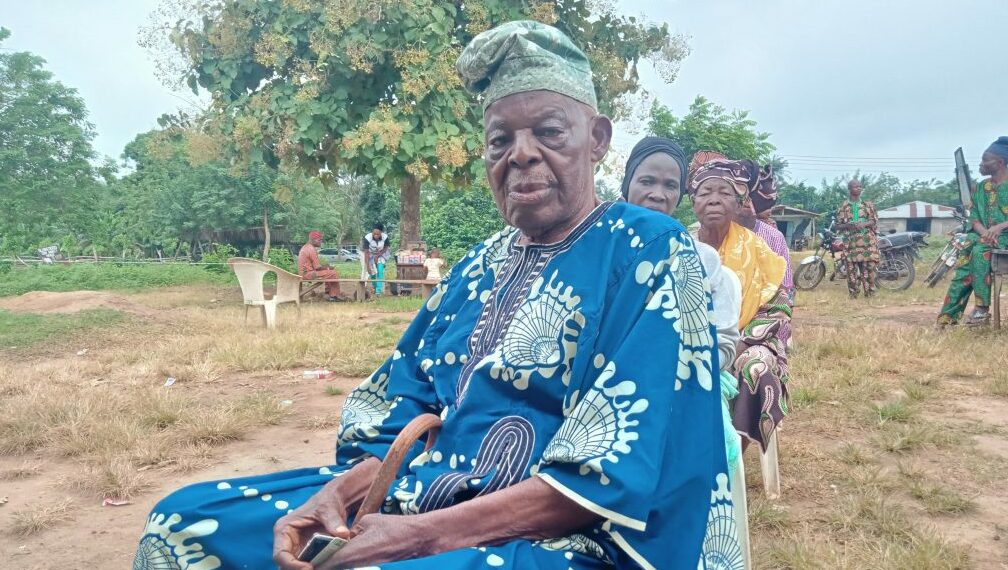 We also spotted a man over 100 years old who waited to vote.

A 95-year-old man, Adekunle Benjamin, and a 90-year-old woman, Shabina Oladipo, were spotted voting at their polling units in Oogi Town, Ayedaade Local Government areas, as early as 7.00 a.m.

Mr Benjamin told the News Agency of Nigeria (NAN) at Unit 7, Ward 8 in Oogi, that he came out early to vote because of his faith in a better Nigeria.

He said he came out as early as 7.00 a.m. to cast his vote for his preferred candidate.

Mr Benjamin, who said he has voted since 1952, said he also came out to vote for a better economy.

“I am 95 years of age, and I have been voting since 1952. I still have faith in this country. I am here to exercise my civic responsibility and to vote for my candidate for a better dividend of democracy,” he said.

“Politics is a game and not a fight. No matter what the outcome of the election might be, the winner and the loser should see themselves as one,” he said.

The nonagenarian commended INEC for the timely arrival of their officials at the polling unit.

Mrs Shabina Oladipo, 90, spotted while waiting to be accredited at Unit 7, Ward 8, Oogi Town, Ayedaade Local Government, said she came out early to vote because of her desire for peace and the development of the state.

Mrs Oladipo said she believed that her preferred candidate would fulfil his campaign promises.

She also appealed to the electorate to come out and vote.

The News Agency of Nigeria (NAN) that Mr Olatunji was visibly the oldest person in the queue at the polling unit when accreditation and voting began at about 8.30 a.m.

Mr Olatunji told NAN that he had been voting since the days of Obafemi Awolowo, saying, “voting is my civic responsibility”.

According to him, I am over 100 years old and have been voting since Awolowo’s era.

“I am happy with the election process and always motivated to see people coming out to vote during the election.

“Election is the only process by which people can choose the leaders they want,” he said.

NAN reported that accreditation of voters and voting commenced smoothly at 8:35 a.m.