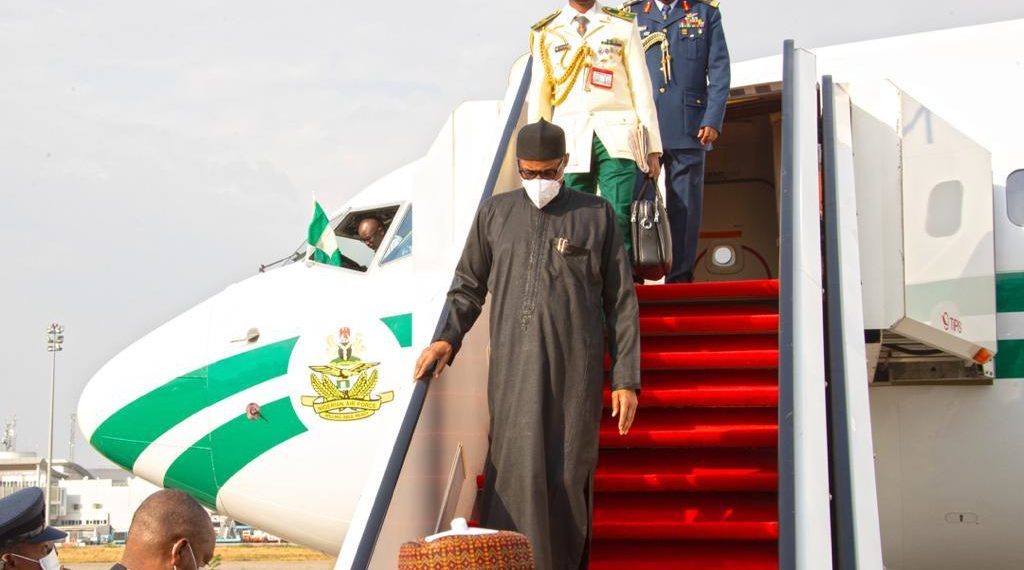 Buhari returns to Abuja after State Visit to Portugal

While in Lisbon, the Nigerian leader held several bilateral engagements which culminated in the signing of Agreements and Memoranda of Understanding between Nigeria and Portugal.

President Muhammadu Buhari on Saturday evening returned to Abuja after a five-day State Visit to Lisbon, Portugal, where Nigeria and the European nation signed a Memorandum of Understanding in diverse sectors.

While in Lisbon, the Nigerian leader held several bilateral engagements which culminated in the signing of Agreements and Memoranda of Understanding between Nigeria and Portugal.

The MoUs signed include Political Consultations, Diplomatic Training, Research and the Exchange of Information and Documentation.

President Buhari had earlier met with representatives of Nigerians living in Portugal, on Wednesday night, where he again cautioned Nigerians abroad against the use of social media to insult and incite from a safe and anonymous distance.

Mr Buhari rather urged them to always promote Nigeria’s unity.

Also on Thursday in Lisbon, Mr Buhari called for an increase in the volume of trade with Portugal as well as diversification to non-oil products.

The president made the call at a seminar between businesses in Nigeria and Portugal.

According to the Nigerian leader, the two countries are in dire need of new investment opportunities following the devastation to global economies caused by the COVID-19 pandemic and, in recent times, the impact of the Russia-Ukraine conflict.

President Buhari also expressed the readiness of Nigeria to fill the natural gas gaps in Europe predicated by the current Russian-Ukrainian war.

Also on June 30, the president approved the renewal of the appointment of Patience Oniha as the Director-General of the Debt Management Office (DMO) for the second term of 5 years.

The president on Friday met with Carlos Moedas, Mayor of Lisbon and City Council Members, where he expressed gratitude and appreciation to them for accommodating Nigerians and those fleeing the war in Ukraine.

Mr Buhari also used the occasion to congratulate him and his party on their electoral victory and his emergence as the Mayor of Lisbon.

The president’s media aide, Garba Shehu, in a statement, said the Nigerian leader thanked Carlis Moedas for graciously receiving the Nigerian delegation in the ‘beautiful and historic coastal city of Lisbon’.

The president gave the assurance in a speech delivered on his behalf by the Minister of State for Environment, Sharon Ikeazor, at the 2022 UN Ocean Conference, in Lisbon, Portugal, on Friday.

While highlighting Nigeria’s effort at ensuring the health and sustainability of oceans, seas and marine resources, Mr Buhari said that a national policy on plastic pollution and the road map for tackling solid and plastic waste management had been formulated and established.

Mr Buhari, who lauded the UN for leading the process of effective ocean governance, said that Nigeria had mainstreamed ocean management into the economy, constituting a Presidential Committee on Sustainable Blue Economy.

He also announced that Nigeria had embarked on the creation of two marine protected areas.

Mr Umar, who made this known at the State House SERVICOM Unit Awards for the Year 2021 in Abuja, revealed that the construction work on the befitting health facility had already reached 75 per cent stage of completion.

According to him, the multi-billion naira medical facility will be one of the legacies the Buhari administration will leave behind for incoming administrations in the country.

The News Agency of Nigeria (NAN) reports that before departing for Lisbon on Tuesday, the president had held official engagements including the swearing-in of Justice Olukayode Ariwoola as the acting Chief Justice of Nigeria (CJN) on June 27.

The swearing in of Mr Ariwoola, the next most senior in the hierarchy of the Supreme Court, as the new CJN, followed the resignation of Justice Tanko Muhammed on health grounds.

The president also on the same day met with Governor Hope Uzodinma of Imo, who updated him on security and socio-economic developments in the state.

Mr Uzodinma, who later spoke to State House correspondents, said he used the opportunity of the meeting to thank the president for approving the hosting of this year’s Armed Forces Remembrance Day Celebration in Imo.

The governor, who also reacted to a recent call by Governor Bello Matawalle of Zamfara that his citizens should apply for guns for self-protection, said there was no need for such actions in Imo.

The president also granted audience to some APC senators over the outcome of the party primaries and its implications for the party.

Mr Buhari reassured that the leadership of the All Progressives Congress (APC) would sustain the post-primaries healing process to ensure fairness, justice and unity before the 2023 general elections.

He said that complaints were received from some members and that machinery had been put in place by the National Working Committee to address their concerns.