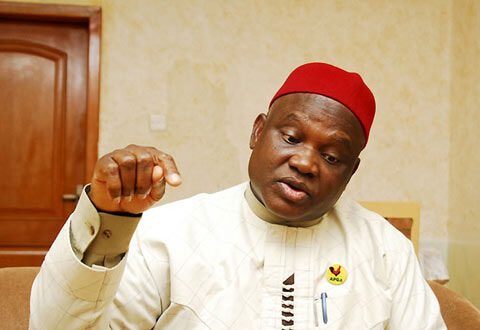 “For record purposes, Chekwas Okorie is not a member of APGA, let alone being its presidential candidate.”

The Abia chapter of the All Progressives Grand Alliance (APGA) said the founding National Chairman of the party, Chekwas Okorie, is no longer a member of the party.

The Chairman of APGA in Abia, Augustine Ehiemere, said this on Friday in Umuahia, while speaking with reporters on the authentic national leadership of the party.

He said Mr Okorie, after his expulsion, floated the United Peoples Grand Alliance in 2012 and later joined the All Progressives Congress.

Mr Ehiemere was reacting to a report which said Mr Okorie claimed to be the legitimate presidential candidate of APGA, and Edozie Njoku, the party’s national chairman.

The party chairman in the state said that it was “preposterous” for Mr Okorie to claim to be APGA’s presidential candidate, having left the party a decade ago to form another party.

He said: “For record purposes, Chekwas Okorie is not a member of APGA, let alone being its presidential candidate.

“He has lost his political value and credibility as far as Nigerian politics is concerned.

“All his efforts now is to see how he can eke a living by joining Chief Edozie Njoku to parade themselves as the National Chairman and Presidential Candidate of APGA, respectively.

“They are both aware that their claims are false and fraudulent.”

Mr Ehiemere described Messrs Okorie and Njoku as “political impostors, who want to reap where they have not sown”.

“APGA has only one presidential candidate for the 2023 general elections, Professor Peter Umeadi, who emerged from a special national convention of the party held in Abuja in June,” he said.

Mr Ehiemere said Okorie and Njoku’s names were not in the APGA’s register in their respective wards.

He expressed the party’s loyalty to the Oye-led National Working Committee (NWC).

“Abia APGA passes a vote of confidence on the NWC of our great party, led by Chief Victor Oye.

“This is to appreciate the committee for its resilience, doggedness and astuteness in piloting the affairs of the party, which we hope would bring victory to us in 2023,” he said.

Meanwhile, Mr Ehiemere and the party’s Legal Adviser, Chukwuemeka Nwokoro, have described as “non-existent” the alleged Supreme Court’s decision declaring Mr Njoku as the national chairman of the party.

“No such Supreme Court decision exists anywhere. There is no such judgment by the apex court.

“It all emanated from their fraudulent intentions to cause confusion in the party,” Mr Nwokoro said.

He challenged Mr Njoku to institute a contempt suit against APGA, Mr Oye and INEC, if he was sure of the existence of such Supreme Court’s decision.

“When the decision of a court is flouted or disobeyed, the option left to the litigant is to institute a case of contempt of court,” Mr Nwokoro said.

The APGA recently faced a leadership tussle, with Mr Njoku claiming he had obtained a Supreme Court’s decision in his favour.

The exercise gap and modern chronic diseases, By Mukaila Kareem