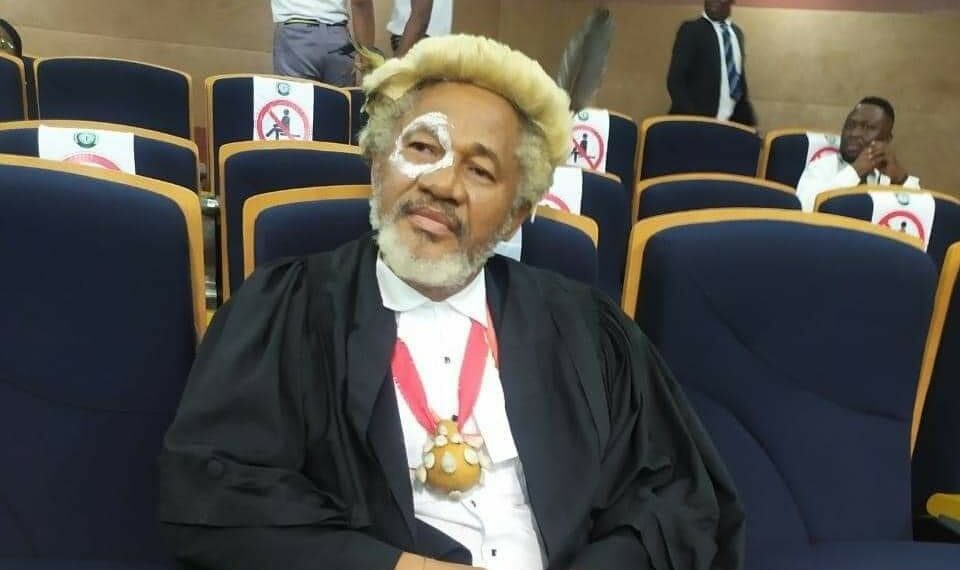 Malcom Omirhobo says he will appear in court in the traditional worshipper’s attire in all his subsequent court appearances.

The lawyer whose traditionalist attire has been raising eyebrows in courts, Malcolm Omirhobo, switched to the traditional legal robe Wednesday saying “the spirit said we should do normal today.”

He added: “Don’t be surprised if you see me the other way tomorrow.”

Mr Omirhobo, a human rights lawyer and activist, made headlines last week when he appeared at the Supreme Court donning a combination of a lawyer and native doctor’s outfit.

The lawyer told journalists that his decision to incorporate a ‘juju priest’s look into his dressing was due to the apex court’s ruling allowing Muslim students in Lagos to wear hijab in schools.

Mr Omirhobo, who hails from Delta State, described his dressing as one worn by the ‘Olokun’ worshippers.

“I am being satirical,” he told The Punch in an interview.

“It is not just an Islamic or private school; it is a public school. Nigeria is a multi-religious society.

“We have the traditional worshippers, Christians, Muslims, Rastafarians, Buddhists. The judgment implies that as long as we all have rights, we all can be allowed to go to our places of work or school in our religious attire.”

On Monday, Mr Omirhobo’s appearance at the Federal High Court in Lagos amused some of his colleagues but irked others.

The lawyer was appearing before Tijani Ringim over two matters, but the judge insisted he must first address the court on why he should dress in that manner.

“You cannot address the court like this as a professional,” The Cable quoted the judge as saying.

“I will adjourn your matter and you come and address the court if the rules allow you to appear in court like this.”

However, on Wednesday, he returned to the traditional lawyer’s robe and wig.

He said he was instructed to follow the professional dress code by “the spirit.”

Asked if the ‘spirit’ was in conformity with the ethics of the law profession and dressing, Mr Omirhobo responded, “What ethics are you talking about? Are you insulting my religion? Don’t try it.”