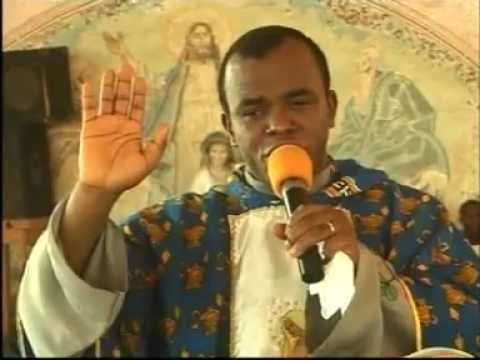 The priest pledges obedience to the Catholic bishop who issued a ban of his ministry.

Outspoken Catholic priest, Ejike Mbaka, has denied involvement in the protest held by his followers against the recent ban on his Adoration Ministry.

Members of the Catholic Church have been banned from attending programmes at the Adoration Ministry.

Many Nigerians, including the diocese, criticised Mr Mbaka over his comment.

The cleric later apologised to the former governor and his supporters, saying his intent was not to malign the LP presidential candidate.

Barely two days after, several followers of the cleric held protest against the ban and demanded the removal of Mr Onaga as the bishop of the diocese.

But in a statement on Sunday, hours after the protest, Mr Mbaka disassociated himself from the protest.

He also cautioned the protesters to refrain from violence and raining insults on Mr Onaga, saying that he remains obedient to the orders of the bishop.

“My intention has been drawn to activities that took place in the Adoration ground this Sunday, June 19. I am not in any way involved in such activity,” Mr Mbaka said of the protest.

“May I therefore appeal to the faithful, in particular, members of Adoration Ministry Enugu, Nigeria, to refrain from any measure of violence, either in action or by abusive utterances,” he said.

The cleric said the bishop remains the chief shepherd of the church in the diocese, and as members of his flock, the ministry must remain respectful, obedient and willing to respond favourably to the bishop’s apostolic directives.

“May I once more remind you that all Adoration activities have been suspended till further notice. The life of the Adoration Ministry is in the hands of God under the direction of the chief shepherd of the diocese.

“Once again, I pledge my obedience to my bishop. The Adoration Ministry Enugu, Nigeria is ever submissive to the mother church. I enjoin all adorers to know this and remain constantly in prayers for the manifestation of the will of God in the life of the ministry,” Mr Mbaka added.