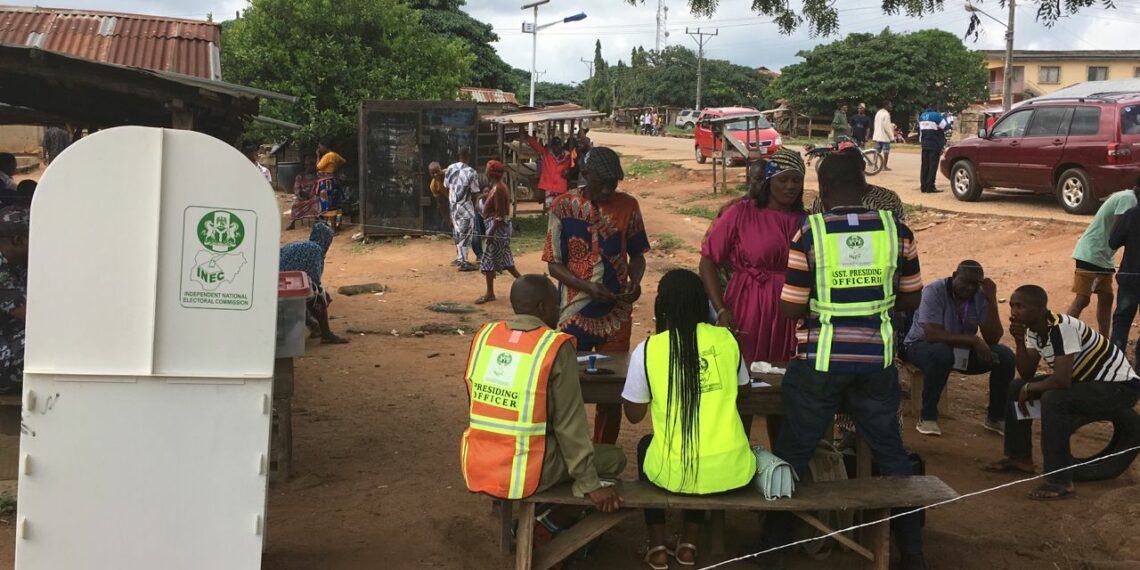 #EkitiDecides2022: In front of Olokola’s house, Ward 008 Odo Ayedun I, Ikole LGA. Voting still ongoing but the BVAS machine keeps malfunctioning this lady on the queue is repeatedly rejected.

CDD issued its preliminary statement on the conduct of the ongoing Ekiti State governorship election on Saturday.

The Centre for Democracy and Development (CDD) said its data from election observation from Ekiti State indicated that 86 per cent of the National Electoral Commission (INEC) officials arrived at their polling units by 8:30a.m.

Adele Jinadu, a professor and CDD chairperson, Election Analysis Centre (CDD-EAC), said this in the centre’s preliminary statement on the conduct of the ongoing Ekiti State governorship election.

Mr Jinadu said that the centre had been closely observing the election after CDD-EAC deployed 205 trained and accredited observers to the field for data collection.

According to him, the CDD-EAC observation of the election has the objective of ascertaining if the election is free, fair, credible and reflects the supremacy of the vote of the Ekiti electorate.

He added that the CDD-EAC also set up a fake news hub aimed at tracking and fact-checking misinformation and disinformation capable of undermining the credibility of the election.

He said, “Reports from CDD field observers indicate that the general atmosphere in which the election is being conducted has been peaceful.

”Voting has largely proceeded smoothly without any reported incidents of violence or disruption of the process.

“The Electronic Observer Platform further showed that 74 per cent of INEC poll officials addressed voters before the 8:30am official time of poll opening.

“CDD-EAC observers also reported a significant increase in the number of female INEC officials, with the data showing that eight polling units had poll officials who were exclusively female.”

Mr Jinadu said the CDD-EAC data further showed that while four polling units had no female at all; all the others had both male and female INEC officials present.

He said CDD-EAC data indicated that in at least 83 per cent of polling units; critical election materials like ballot papers, BVAS devices, results sheets, ballot boxes and the voter register were available.

According to him, in most of the polling units, CDD-EAC observers did not see or report any form of campaigning; however, in 11.3 per cent of polling units campaigns and display of campaign materials was reported.

He said that the data showed that all polling units reported the presence of at least one party agent. However, in Polling Unit 003, Ward 06 in Ekiti West LGA, only one party had an agent.

He added that CDD-EAC data showed that in all 168 Polling Units, BVAS was available; however in polling unit 010 Ward 10, in Irepodun Ifelodun LGA, there was no BVAS at the time when poll was expected to commence.

He added that the CDD-EAC Fake News Hub tracked and fact-checked a number of fake news and misinformation trending on election day.