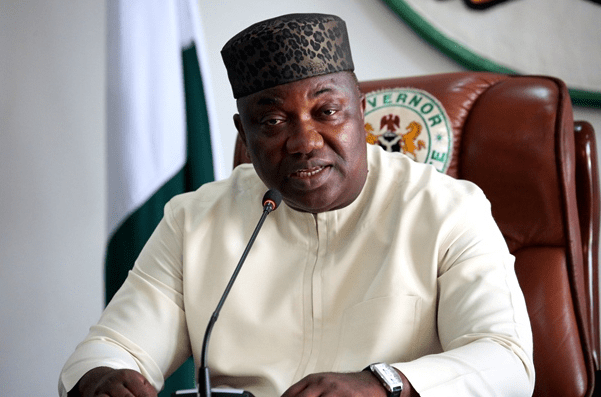 Enugu, like other states in the South-east, is grappling with deadly attacks by gunmen.

Governor Ifeanyi Ugwuanyi of Enugu State has declared a 12-hour curfew in Igbo-Eze North and Igbo-Eze South Local Government Areas of the state.

The Secretary to the State Government, Simon Ortuanya, who disclosed this in a statement on Friday, said the curfew takes immediate effect and will be active between 6 p.m. and 6 a.m. daily.

He explained that the decision was “pursuant to Executive Order No. 3, 2022 and consequent upon security challenges in Igbo-Eze North and Igbo-Eze South Local Government Areas of Enugu State”.

Mr Ortuanya added that the governor imposed the curfew in exercise of the powers conferred on him by Section 215 (4) of the 1999 Constitution of the Federal Republic of Nigeria (as amended).

The statement directed the chairmen of the two council areas as well as operatives of the Forest Guard and Neighbourhood Watch in the affected areas to ensure strict compliance with the executive order.

It also directed the state commissioner of police to take all lawful measures to enforce the order, “including arrest and prosecution of defaulters”.

The decision comes barely three days after the governor held an emergency security meeting at the Government House, Enugu.

Enugu, like other states in Nigeria’s South-east, has witnessed an increase in deadly attacks lately.

The tricycle and motorcycle rider associations in the two local council areas have directed their members not to operate in the areas from 6 p.m. to 6 a.m.

They also directed all Keke and Okada operators to withdraw their services in Aguibeje and Iyionu communities in Igbo-Eze North Local Government Area, with effect from June 7, 2022, till further notice and requested security agencies in the state to enforce the associations’ resolutions.

Arsonists, believed to be enforcing the illegal sit-at-home order in the South-east razed a cement truck in the Nsukka area of the state.

Mr Ugwuanyi recently banned the operations of motorcycles and tricycles in some local government areas to check the frequent attacks in the area.

The government later lifted the ban following public outcry, and assurances from leaders of the transport operators to assist the government in bringing an end to the attacks.

The attacks, mostly targeted at security officials and government facilities, have been attributed to the outlawed Indigenous People of Biafra (IPOB) which is agitating for a sovereign state for the Igbo-speaking people in the South-east.

The IPOB leader, Nnamdi Kanu, is detained in Abuja where he is standing trial for terrorism.

Why I left APC – Senate Leader