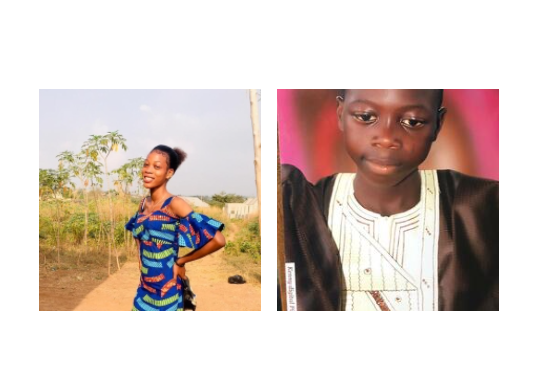 "The grandpa challenged them but one of them hit the man on the head and he passed out immediately."

The siblings were abducted at their residence around 9:00 p.m. on Tuesday while they were both washing their school uniforms.

A witness who does not want to be mentioned on security grounds, told a PREMIUM TIMES reporter that the gun-wielding kidnappers entered the house, grabbed the siblings, and forced their way out of the premises.

About 12 hours after the abduction, the kidnappers contacted the family requesting for N15 million before the children could regain their freedom.

“They came into our house around 9:00 p.m., just behind our house where David and her sister were washing their uniform. Their grandpa too was seated there when the kidnappers appeared and held the two of them.

“The grandpa challenged them but one of them hit the man on the head and he passed out immediately. Their mother heard the noise and rushed out but met the kidnappers stiff resistance.

“They shot in the air for few minutes before taking to their heels.”

Contacted, the spokesperson of the Ogun State Police command, Abimbola Oyeyemi, confirmed the incident, saying the police is handling the matter.

“We would like to also use this medium to appeal to the family of the victims to please carry us along in any conversation with these hoodlums.”

Meanwhile, a pressure group, the Yewa North Patriotic Forum, has expressed their displeasure over the incident, saying the state is no more safe for residents.

The group, in a statement signed by its Secretary, Ganiu Fatolu, and made available to PREMIUM TIMES, appealed to law enforcers to live up to their responsibilities.

The statement reads in part, “We are highly devastated at the horrible incident which took place at a not too far distance to a police station. While the kidnappers shot in the air for minutes, they were left to have a field day.

“As an association that fights for the interest of our people, we can only appeal to the law enforcers, especially the police, to be alive to their responsibilities and ensure a safe return of this two young but promising ones.

“Although, we understand that the state is no longer safe for citizens not to talk more of investors, but our case in Yewa axis is more than terrible. People now keep vigils protecting their families.

“Well, we know that this time too shall pass. But, we must all remember, that a king who turned a village into a city and the other who turned a city into a village shall both not be forgotten. But what they will be remembered for shall either be the evil or the good they did during their times.”