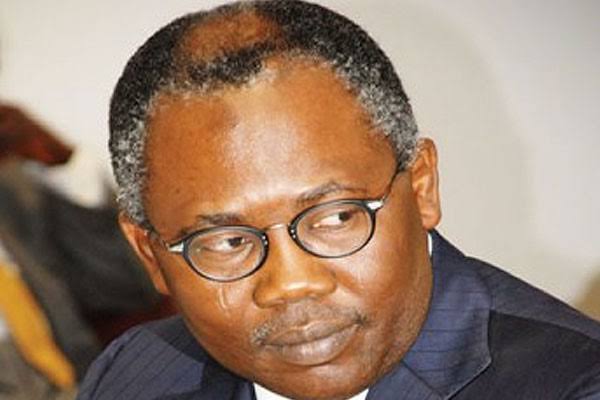 Mr Adoke had petitioned the police accusing the HEDA chair of peddling falsehood against him in respect of the Malabu Oil scam.

Mr Adoke had petitioned the police accusing the HEDA chair of peddling falsehood against him in respect of the Malabu Oil scam.

Mr Suraju was arraigned before Binta Nyako, a judge of the Federal High Court in Abuja, on a two-count amended charge.

In count one of the charge marked: FHC/ABJ/CS/370/2021, Mr Suraju is accused of intentionally circulating an audio telephone interview between one Ms. Carlamaria Rumur, a reporter with RIAReporter in Italy, about Mohammed Adoke via his twitter handle @HEDAagenda, which he knew to be false.

The prosecution accused him of spreading the alleged falsehood for the purpose of causing an insult to Adoke and thereby committing an offence contrary to section 24 of the Cybercrimes (Prohibition, Prevention ETC) Act 2015 and punishable under the same section of the Act.

In count two, the defendant is accused of committing the same offense in count one via the Facebook handle @HEDAResourcecentre.

Mr Suraju denied both charges, pleading not guilty when read to him on Friday.

Salihu Bagudu, from the Office of the Attorney General of the Federation, announced appearance for the prosecution, while Muiz Banire, a Senior Advocate of Nigeria (SAN), announced legal representation for Mr Suraju.

The court, however, ordered that the defendant should tender the cheque of N7 million to the court’s registrar, being the highest sum for penalty of the offence upon conviction.

The suit was adjourned until May 10 for hearing.

The arraignment had suffered three earlier adjournments on account of the prosecution and Mrs Nyako’s absence.

Mr Adoke had petitioned the Nigerian police over the circulation of the audiotape and email which Mr Adoke said were forged to incriminate him regarding the Oil Prospecting Licence (OPL) 245 corruption case in Milan, Italy.

The police investigated Mr Adoke’s petition against Mr Suraju and subsequently sent the case file to the Attorney-General of the Federation’s office which filed a cyberstalking case against Mr Suraju.

But, during their series of denials of wrongdoing regarding the matter, HEDA and Mr Suraju had explained that the items he was accused of fabricating were court exhibits which featured in the Malabu Oil scam trials in Milan, Italy.

In their open letter to President Muhammadu Buhari and the Attorney-General of the Federation, Abubakar Malami, they maintained that the statements allegedly made by Mr Suraju were identical to those that have been made by the Federal Republic of Nigeria in its civil cases against JP Morgan Chase in London and its case against Shell, Eni and other defendants in Milan.

Nigeria has been part of civil and criminal cases in the U.K., Italy, and the U.S. in a bid to bring beneficiaries of the fraudulent transactions to book and to recover proceeds of the controversial deal from them.

The email and audiotape complained of by Adoke had featured in the criminal case in Milan, Italy over the transfer of about $1.1 billion by Shell and ENI through the Nigerian government to accounts controlled by a former Nigerian petroleum minister, Dan Etete.

The controversies surrounding the OPL 245 started in 1998 when Mr Etete originally awarded the block to his Malabu Oil and Gas Limited while serving as petroleum minister in the late Sani Abacha`s regime.

Nigerian investigators and activists had alleged that Mr Etete bribed some top officials of the Goodluck Jonathan administration after Eni and Shell controversially acquired OPL 245, one of Nigeria’s richest oil blocks.

The Nigerian government did not benefit from the $1.1 billion transferred for the acquisition of the rich oil field while the ownership logjam over the oilfield remained unresolved.

In 2011, the AGF, Mr Adoke advised the administration of Goodluck Jonathan on the OPL 245 transactions at the time to resolve the ownership logjam that prevented it from being explored over the years.

His name has repeatedly featured in matters connected to the deal. He is being currently prosecuted by the Economic and Financial Crimes Commission (EFCC) at the Federal High Court in Abuja over his roles in the alleged scam.