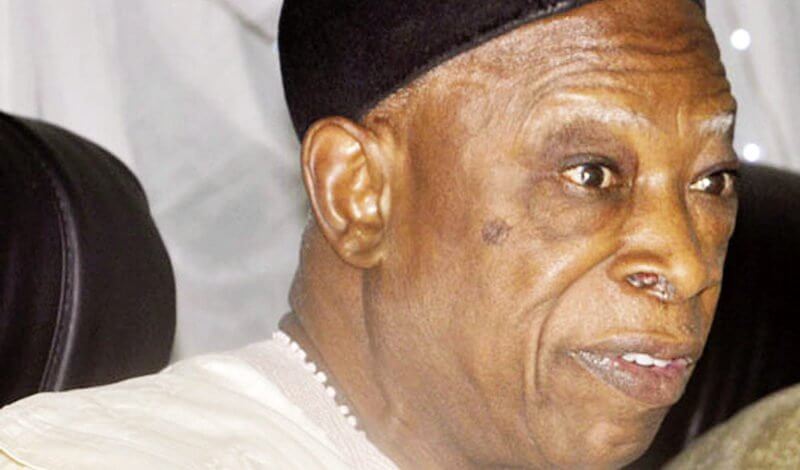 "Nowhere in the Nigerian constitution that says we should zone any public office. There is federal character. But not that parties must zone positions for presidency during election."

The idea of zoning political offices is not democratic and not a part of the Nigerian constitution, a former governor of Nasarawa State, Abdullahi Adamu, has said.

Mr Adamu, who is currently the senator for Nasarawa West senatorial district on the platform of the All Progressives Congress, said instead of clamouring that positions be rotated among zones, parties should be allowed to produce candidates and campaign based on merit.

He made the comment during a press briefing with journalists at the National Assembly on Monday.

His comment comes amidst clamour for power shift from the North to the South.

It also comes about a week after former Borno governor, Ali Modu Sheriff, said Nigeria’s next president can come from any part of the country.

“Nowhere in the Nigerian constitution that says we should zone any public office. There is federal character. But not that parties must zone positions for presidency during election,” the former governor said.

“The constitution is being reviewed. If you want a specific provision that presidential positions be zoned, you say it – and tell us how you want it to be zoned. You can’t just wish away, a situation that is fundamental to a country. You can’t talk of merit and talk of zoning. You can’t.

“The issue of rotation is… Let’s just go by merit. Let every party find a way of selling itself in a manner that will garner the kind of votes that will win the election. It’s as simple as that.”

While he symphathised with political players in the South-east who are asking that the presidential position be zoned to the region come 2023, Mr Adamu said such practice is not in the American constitution “which Nigeria tries to emulate.”

“It is democracy. Why do you want to change it? Wishful thinking only. How do you zone it?

“Yes, somebody is saying the East has not had a president. I agree. And I sympathise. But the constitution says you can only become president through the ballot box. And we have been saying it during elections that every vote must count. So, why do you want to zone?

“Zone your mind if you want to zone,” he said.

The lawmaker also berated the Southern governors for calling for, and in some states, enacting an anit-open grazing law.

This comes on the heels of famers and herders clashes in the South-west and South-east.

Every Nigerian, he said, has a right to free movement and the right to pursue any legitimate business as enshrined in the constitution.

This is even as he blamed the governors for failing to protect the herdsmen in the southern region of the country.

“The fact that a governor or two in the North has said something similar, does not take away the right of the herdsmen.

“You cannot blame the person who is desperate and looking for a means livelihood from going to pursue his own goals. The government owes these herdsmen a duty to protect their calling.”

He, however, said this does not excuse anybody, in the course of exercising his right, harm another person’s right.

“A farmer has the right to farm. If you take your cattle to his farm and cause damage, he has a right to claim and he can claim in the court of law. If all the northern governors echo the same thing that the southern governors did, it doesn’t change it.

“Yes, there is modernisation but it is not the fault of the herdsman that he still grazes the same way he has been doing. We have misdirected our political thinking and activism by refusing to tackle the main issue.

The lawmakers also scored high, the nation’s progress since independence till date.

While he maintained that the Muhammadu Buhari-led administration has not failed, he said current challenges like insecurity and food crisis, ravaging the country were inherited from the past administration.

What to expect as National Assembly resumes session