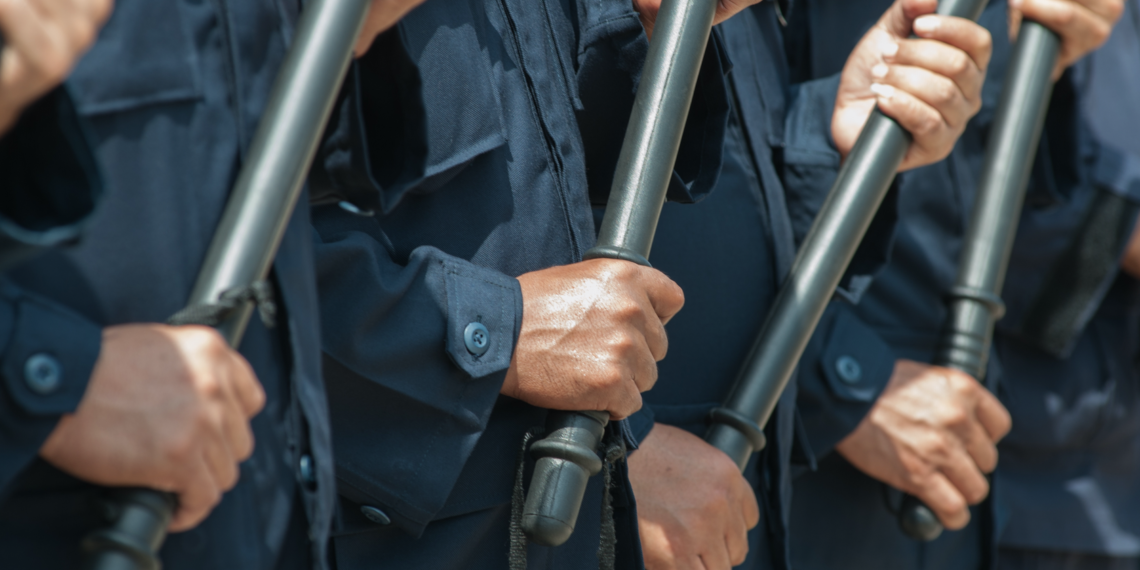 In a new investigation, Blunt Force, the organisations catalogued 188 incidents where law enforcement officials have misused striking weapons such as batons.

Amnesty International and the Omega Research Foundation today called on governments to support a UN-led process to regulate the trade in law enforcement equipment, highlighting how ubiquitous weapons like police batons are routinely misused in ways that can constitute torture and other ill-treatment.

In a new investigation, Blunt Force, the organisations catalogued 188 incidents where law enforcement officials have misused striking weapons such as batons, which are currently traded with little to no regulation. The investigation draws on open-source photo and video evidence from 35 countries, and includes examples from violent crackdowns on protests in Belarus, Colombia, France, India and Myanmar. Videos show law enforcement officials using batons and similar weapons like lathis and sjamboks to inflict punishment, beat people who are already restrained, deliver unjustified dangerous blows to the head, or choke people in neck holds.

As a UN process to create an international regulatory framework moves ahead, Amnesty and Omega are calling for tighter controls on the trade in “less lethal” law enforcement weapons, as well as an outright ban on certain types of inherently abusive equipment used for torture or the death penalty.

“Batons can cause serious injury and even death when used improperly. Yet the trade in law enforcement equipment like this continues to benefit from a shocking absence of regulation. Governments should be obliged to conduct rigorous risk assessments before allowing this equipment to be exported,” said Verity Coyle, Advisor on Military, Security and Policing at Amnesty International.

“States should also ensure that law enforcement agencies are trained and instructed in human rights compliant policing, including in the context of public assemblies, where many of the violations we documented took place. There are international standards governing how police can use force, but our investigation shows these being flouted all over the world – with profoundly dangerous consequences.”

Striking devices are the most common type of less-lethal weapon, carried by police and security forces worldwide. These include batons, lathis (long sticks) and sjamboks (rigid whips). The widespread deployment of this equipment means it is also among the most frequently abused, especially in the context of crackdowns on protests.

Some less-lethal weapons and equipment can have a legitimate use in law enforcement, if employed correctly and in line with international standards. Law enforcement officials face a wide variety of situations which require instantaneous decisions, often in highly stressful and even dangerous circumstances. But the use of force must only be resorted to with the utmost respect for the law, and with due consideration for the serious impact it can have on a range of human rights.

Under the UN Basic Principles on the Use of Force and Firearms by Law Enforcement Officials (BPUFF), police may only use force for a legitimate law enforcement purpose, and may not use more force than needed to achieve this objective. Any potential harm caused by police using force must not outweigh the harm they want to prevent. Furthermore, as with other means of force, batons must never be used for the purpose of punishment. These rules also apply in the context of policing public assemblies. Blunt Force shows how law enforcement officials routinely act against international human rights law and standards by attacking protesters who present no threat of violence.

Amnesty International’s Crisis Evidence Lab and Digital Verification Corps analysed more than 500 videos of protests between 2011 and 2021, identifying and verifying 188 incidents of baton misuse. Videos of five illustrative cases are available here, with Amnesty and Omega’s analysis of how international standards have been breached in each case.

For example, a video from Hong Kong shows a young male protester being repeatedly hit with batons by several officers. One of the officers strikes the protester on the head, causing bleeding. Strikes to the head are particularly dangerous and can even be fatal, and putting another life at risk is prohibited under international law and standards, if it is not unavoidable and in response to a similarly serious threat. Crucially, the video shows that officers clearly had other, less harmful options at their disposal to achieve their aim of arresting the protester.

Footage from Belarus shows riot police leading a protester down some stairs. An officer strikes the protester on the back of the legs even though he is not resisting arrest; while being held by one officer, the protester is then struck on the back of the head with a baton and punched in the face and stomach. Baton strikes while a subject is under control are unnecessary and disproportionate, and amount to using batons punitively – which amounts to torture or other cruel, inhuman and degrading treatment or punishment, a violation of international law.

The UN Secretary-General has tasked a group of experts to develop proposals with the aim of creating an international framework to regulate the trade in equipment that can be used for torture or in the death penalty. This includes less-lethal equipment like batons and tear gas. They must report back to the UN General Assembly in 2022.

Given the clear risk of common law enforcement weapons being misused, any global framework to regulate the trade must cover the broadest possible scope of equipment.

“A growing number of states have recognised the need to address the trade in law enforcement weapons and equipment, as part of the global fight against torture and other ill-treatment. The ongoing UN process to develop common international standards is a once-in-a-generation opportunity to regulate a trade which has been out of control for decades.

“We call on all states to support the creation of a global, legally binding instrument which bans inherently abusive equipment and weapons and places strict controls on the trade in standard law enforcement equipment, to ensure it is never sent to those who will use it for torture or other ill-treatment. To make a real difference, such regulation must cover the types of weapons, such as batons, that are most regularly misused by law enforcement officials around the world.”

2023: PDP governors speak on crisis in party as NEC meets over zoning