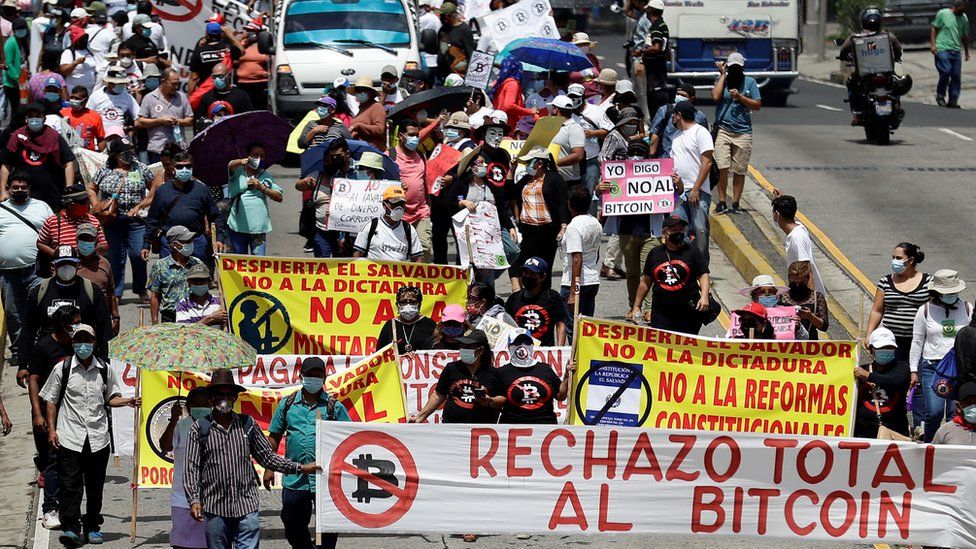 Over 1,000 protesters took to the streets of San Salvador to vent their plights, opposing the Latin American country's adoption of Bitcoin as a legal tender.

Protests broke out Wednesday in El Salvador, after Bitcoin witnessed its biggest crash in nearly a month, just a day after the Central American nation became the first country in the world to adopt the popular cryptocurrency as a legal tender.

The country’s president, Nayib Bukele, announced on Monday that they had acquired roughly $21 million bitcoin worth in order to uplift the circulation of the digital currency among its citizens.

This came three months after the president had announced in June that he has sent a bill to the country’s parliament for a vote on the currency’s adoption.

Lawmakers in the Central American country voted by a “supermajority” in favour of the Bitcoin Law, which received 62 out of 84 of the legislature’s vote. The price of bitcoin was up 5 per cent to $34,239.17 shortly after the vote.

“From today, businesses will be obliged where possible to accept the controversial digital coins as payment,” a BBC report quoted the government as saying Tuesday.

Daniel Hercules, 26, a Salvadorian taxi driver expressed excitement by the move, but that he is also worried about how stable his earnings will be.

“I’ve accepted Bitcoin for about two months since I knew this was coming. I just had someone pay me $40 in Bitcoin for a fare to the airport but it’s rare. Only around 10% of customers prefer to pay with Bitcoin,” the BBC quoted him as saying.

Meanwhile, a survey by the Central American University (UCA) found that only 4.8 per cent of the 1,281 people who took part understood what Bitcoin is all about.

It was noted that more than 68 per cent of respondents said they disagreed with using cryptocurrency as a legal tender.

Nearly 24-hour after El Salvador’s Bitcoin policy took effect, Bitcoin crashed to its lowest in nearly a month. It fell from the $52,000 benchmark it has been trading in days to below $43,000 at some point.

Over 1,000 protesters took to the streets of San Salvador to vent their plights, opposing the Latin American country’s adoption of Bitcoin as a legal tender.

The crash in the price of the currency happened as platforms such as Apple and Huawei refused to offer the government-backed digital wallet, called Chivo, which resulted in servers having to be pulled offline after user registrations could not be sustained.

By implication, the price of the digital currency has plummeted by 29.34 per cent after it touched an all-time-high record of $64,829.14 in April, coinmarketcap.com data showed.