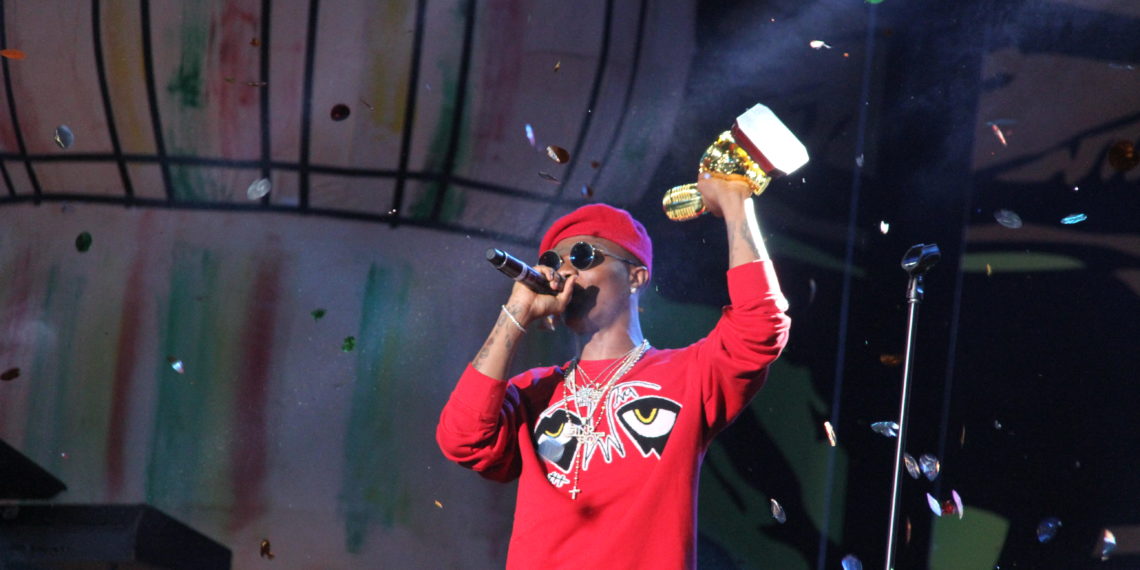 Wizkid AFRIMA 2017 - Artiste of the Year

The organisation said these entries were received in spite of the negative impact of COVID-19 on culture and the creative industry.

The African Union Commission (AUC) and The International Committee of All Africa Music Awards, (AFRIMA), have received 8,880 entries for the AFRIMA 2021 Awards.

It is a record number of entries since the inception of the continental awards in 2014 which is 8.86 per cent higher than the 2019 edition.

The organisation said these entries were received in spite of the negative impact of COVID-19 on culture and creative industry.

Now in its eighth year, AFRIMA recognises and honours African artistes, music producers, songwriters, video directors, Disc Jockeys, Choreographers/dancers, and movie/film producers living on the continent or in the diaspora as well as International acts with the 23.9-carat gold-plated AFRIMA trophy.

This year’s entries were received from 50 African countries across the five regions of Africa and 10 countries from Europe and North America including Spain, United Kingdom (UK), United States of America (USA), France, Portugal, among others.

“The increased interest in the awards is a clear indication that AFRIMA, a platform of bringing Africans together through the instrumentality of music and culture, is growing immensely across Africa and globally, which is a very important goal for us. Also, it is a signal that artists and actors in the music industry are becoming resilient in the face of global challenges,” says Head of Culture, African Union Commission, Angela Martins.

Entries for the longest-running African continental awards in the last decade, which opened worldwide to artistes on June 1, 2021, and closed on August 20, 2021, are higher than 2019 submissions of 8,157.

Recall that the award could not be held in 2020 due to the COVID-19 pandemic.

The Head of Communication and Partnership, AFRIMA, Zineb Seyad, said, “We are encouraged by the number of entries received for the 2021 AFRIMA. Of the 8,880 entries submitted this year; West Africa leads the pack with 30.4% of the total entries followed by Eastern Africa with 28.8%, Southern Africa with 22.9%, Central Africa and North Africa and International acts have 12.3%, 4.9% and 0.7% respectively.

‘‘It can be recalled that The International Jury of AFRIMA, announced additional three new categories for 2021 edition, which included Best Soundtrack in a movie/series/documentary film, Best Global Act, and Breakout Artiste of the Year (Renaming Most Promising Artist)’’.

Following the end of the AFRIMA 2021 entry submission, a 13-man International Jury of AFRIMA would arrive Lagos on August 29, 2021 for the week-long adjudication process.

After this process is concluded, the 2021 Nominees’ List would be unveiled during a World Media Conference in the second week of September 2021, while public voting will follow immediately.

AFRIMA urged followers and fans of African music to catch up with updates on the AFRIMA website, www.afrima.org, its social media platforms, @afrimawards, and all broadcast affiliates to know who this year’s Nominees’ finalists will be and for more information about the awards ceremony, which will take place in November 2021.

Innocent Idibia, popularly called 2Baba, and Burna Boy were among the artistes who won awards at the 6th AFRIMA which was held on November 24, 2019, at Eko Hotel and Suites, Victoria Island, Lagos.

2Baba won the award for Best African Artiste in African contemporary and a Special Recognition Award which he won with Awilo Logomba.