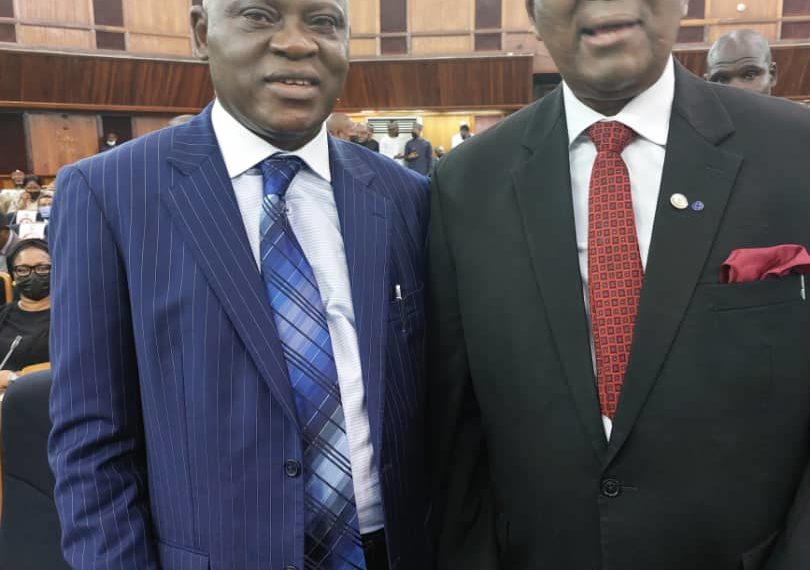 Hesseini Baba-Yusuf (L) acting Chief Judge of the FCT High Court and Adegboyega Awomolo (SAN) at the swearing-in ceremony of the former at the Supreme Court complex on Monday in Abuja.

The office of the FCT Chief Judge had become vacant 16 days ago.

The Chief Justice of Nigeria (CJN), Tanko Muhammad, on Monday swore in Husseini Baba-Yusuf as the acting Chief Judge of the Federal Capital Territory (FCT) High Court, ending a 16-day vacuum in the headship of the FCT judiciary.

PREMIUM TIMES had reported how President Muhammadu Buhari’s medical trip to London had created the vacuum in the office of the FCT Chief Judge.

Mr Buhari created the unprecedented vacuum in the FCT judiciary by embarking on a foreign medical trip to the United Kingdom without transmitting power to Vice-President Yemi Osinbajo.

In the absence of Mr Buhari who jetted out of the country with the reins of power on July 26, Mr Osinbajo could not give the constitutionally required approval for the appointment of the FCT Chief Judge.

Mr Buhari only gave his approval for Mr Baba-Yusuf’s appointment after returning from the 18-day trip to London on Friday.

The CJN similarly swore in five Khadis for the FCT Sharia Court of Appeal.

While administering the oath of office to Mr Baba-Yusuf and five Khadis of the FCT Sharia Court of Appeal, the CJN urged the new judicial officers not to take the exercise for granted.

Mr Muhammad said: “You must endeavour to be impartial, fair to all, and apply justice and equity in all your undertakings.”

He extolled the leadership qualities of the acting FCT Chief Judge, saying, “We need a judicial officer like Husseini Baba-Yusuf who is calculative, objective, dispassionate, humble and people-centric to be at the helm of affairs of the court.”

The CJN further advised the jurists not to allow the enormous responsibilities on their shoulders to weigh them down.

Mr Muhammad reminded the acting Chief Judge and the new Khadis of the temptations and intimidation that come with the job.

He, however, assured the judges to remain “firm and unshaken because good conscience fears no threat.”

Mr Sadis, until Monday, was a longstanding prosecutor with the Economic and Financial Crimes Commission(EFCC). Among the high-profile corruption cases he was handling is the trial of Abdulrasheed Maina, the chairman of the defunct Pension Reform Taskforce Team.

His profile shared with PRMIUM TIMES by an official of the court shows that he attended LGEA Primary School, Ankpa, from 1966 to 1971.

He had his A Level education at the School of Basic Studies, Ugbokolo, Benue State, from 1977 to 1980.

He gained admission into the University of Lagos in 1980, and obtained the LLB in 1983.

He proceeded to the Nigerian Law School and was called to the bar 1984.

He thereafter underwent the national youth service organised by the National Youth Service Corps (NYSC) which he completed in 1985.

Mr Baba-Yusuf began his legal career by joinning the services of the Kogi State judiciary in 1985 as Magistrate Grade II and rose through the rank, becoming the Chief Registrar of the state High Courti in 1993.

He later joined the services of the FCT Judiciary on transfer of service same year, and was appointed High Court Judge in 1998.

He has since been on the FCT High Court bench and rose to become the most senior judge after Garba Salisu’s resignation as the Chief Judge.

Mr Salisu had resigned to take up an appointment as the Administrator of the National Judicial Institute (NJI), the training institute for Nigerian judges and judiciary officials

If eventually confirmed as the substantive Chief Judge and barring any unforseen events, the 59-year-old Baba-Yusuf will be the FCT judiciary’s helmsman till his attainment of the retirement age of 65 in six years’ time.

He currently handles high-profile corruption cases, including the celebrated trial of the former National Security Adviser, Sambo Dasuki, with others accused of diverting funds meant for arms procurement under the ex-President Goodluck Jonathan administration.

Managing salaries and wages for optimal benefits, By Bolutife Oluwadele