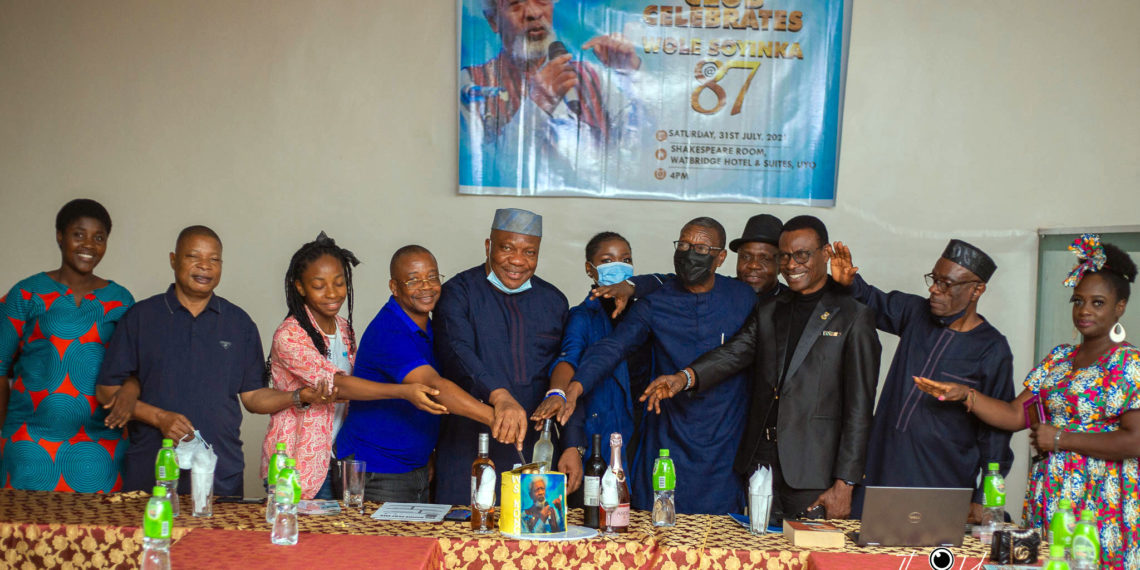 Authors, others converge for Soyinka @87

Authors, others converge for Soyinka @87

“Soyinka established a tradition of voicing out against miscarriage of justice."

It was a rendition of eulogies as authors, poets and others converged Saturday in Uyo, Akwa Ibom State, to celebrate Wole Soyinka at 87.

Mr Soyinka is a professor of Comparative Literature and the 1986 Nobel Prize winner in Literature. He turned 87 on July 13.

The event, tagged “Kongi @87,” was a special reading session organised by a literary club, Uyo Book Club, to celebrate the 87th birthday of the literary icon and Nobel laureate. It was attended by people across all disciplines.

Delivering the lecture ‘Having fun with Wole Soyinka,’ the guest lecturer, Patrick Ebewo, shared his experiences on Mr Soyinka’s literary exploits and described the Nobel laureate as a special human being who believes in justice as the first condition of humanity.

“Soyinka established a tradition of voicing out against miscarriage of justice. His lone voice can be likened to a tiny David fighting the giant Goliath of the continent and he is highly regarded as a fighter of the people’s freedom,” said Mr Ebewo, a professor of Dramatic Arts.

Mr Ebewo, who is the Vice Chancellor of Top Faith University, dissected the literary works of the Nigerian playwright: The Interpreters, The Man Died, The Trials of Brother Jero, Chronicles, Death and The King’s Horseman and others.

Mr Ebewo, whose doctoral dissertation was on Mr Soyinka, described him as the great enigma of our time whose essence cannot be written in one book.

Mr Ebewo was joined by Effiong John, a professor of Theatre Arts University of Uyo; Ekong Sampson, a lawyer and poet; Martins Akpan, an author and scientist; and Udeme Nnanna, a communication scholar and author. The event was aired live on zoom.

For Mr Sampson, ‘Writers are prophets’ as captured in ‘The Man Died.’ He stressed that a writer must live for something as Mr Soyinka is known for his contributions to knowledge, activism and strong advocacy for access to justice.

“The man has remained standing even at 87 and tirelessly challenges our sensibilities on human rights and justice. As the country is facing challenges on many fronts ranging from insecurity, weak economy, secessionist agitations, his life challenges us for a saner society.”

Mr Sampson entertained the guests with his new poem, ‘My pen is pregnant’ which was introduced to the public for the first time.

On his part, Mr Akpan, an author and poet, described Mr Soyinka as a man that masters the ‘joints of literature.’ He said there is still a lot in Mr Soyinka that is yet to be exploited.

In his contribution, Iboro Otongaran said Mr Soyinka’s “writing is a treasure of language use, a pulsating depository of culture and all that is fun in the English language. For those who love forensic challenges – Soyinka is a good company, especially his plays and poetry. Perhaps Soyinka is Nigeria’s best known brand.

“For a country that has so little to celebrate lately, Soyinka is therefore worth all the drums and cymbals that can be rolled out for him at any time and more so at his birthday anniversary.”

There was also a cutting of a cake that had an inscription ‘WS Kongi @87’ where WS stands for Wole Soyinka.

Earlier in his welcome remark, Udeme Nnanna, founder of Uyo Book Club, described Mr Soyinka as his role model since he was a teenager.

Mr Nnanna, a Mass Communication lecturer, said Mr Soyinka is a man whose spirit of activism cannot be bought.