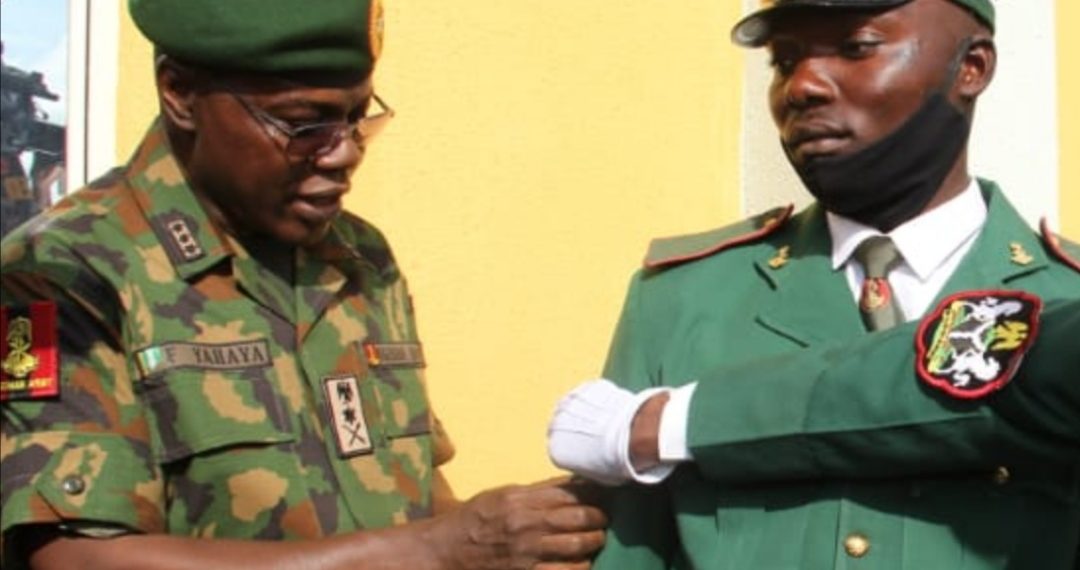 The Chief of Army Staff, Farouq Yahaya, has promoted a soldier from private to lance corporal for excellent performance while executing a task far above his rank.

The soldier, Jamilu Mohammed, was acting as the Quarter Guard Sergeant at Command Engineering Depot in Kaduna at the time Mr Yahaya visited on Monday.

Mr Mohammed, who was under three years old in the Nigerian Army, had to step in to perform the task that requires a soldier with 16 years of experience to accomplish.

After leading the Quarter Guard parade to welcome the COAS, Mr Mohammed had to, perfunctorily, introduce his rank as “19NA/782148, Private Jamilu Mohammed”. And that introduction generated the curiosity and interest of the army chief.

After the quarter inspection, the army chief recommended Mr Mohammed for a promotion to the next rank – which is lance corporal.

In the Nigerian army, it takes a private soldier five years to be promoted lance corporal. Mr Mohammed still has about three years more to be due for the promotion.

Sources familiar with the military ranking system said it takes courage and rare confidence for even senior non-commissioned officers to stand and lead a parade before the COAS. But Mr Mohammed did his assigned task without any flops.

Army spokesperson, Onyema Nwachukwu, said the action of the chief of army staff was “in line with one of the pillars of his command philosophy of professionalism.

“This promotion came as a result of the professional military skills displayed by the soldier at a regimental Quarter Guard during COAS’ operational visit to Command Engineering Depot in Kaduna,” Mr Nwachukwu, a Brigadier General, said.

While decorating the soldier with his new badge of rank, the COAS said he performed his duty far above expectation.

“The promotion/is a reward for outstanding performance as an Acting Quarter Guard Sergeant to spur others to always display a high sense of professionalism in whatever task they are assigned to perform,” the COAS said.

“This will not only improve the system, but also guarantee success in all military operations.”

The COAS, who, according to Mr Nwachukwu, “was at the CED to inspect the facilities to enhance the productive capacity of the centre, said he was impressed with the research and developmental efforts of the engineers.”

The army spokesperson said one of the COAS’ cardinal focuses is to “prioritise training, capacity building and professionalism amongst personnel of the NA.”