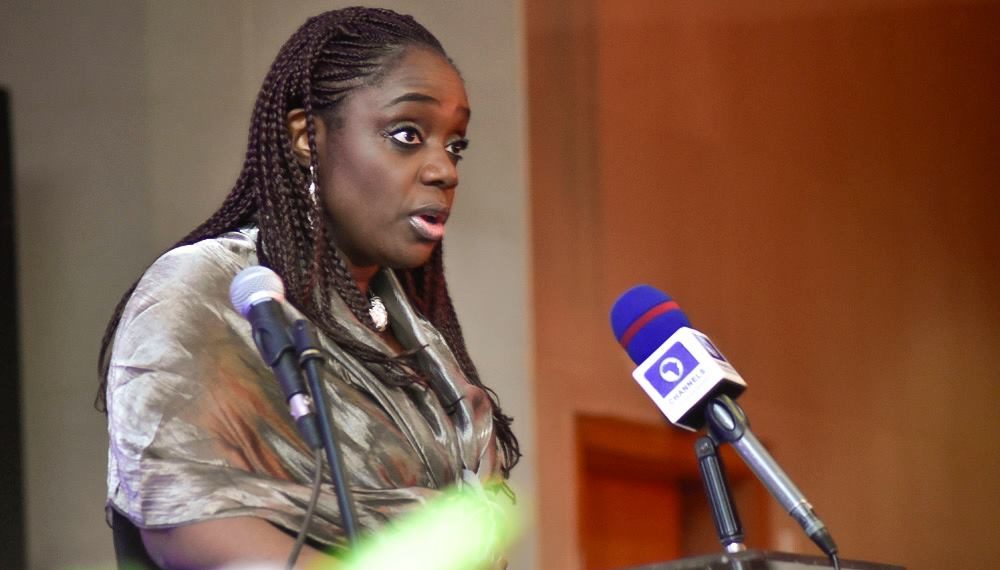 Ex-Finance minister, Kemi Adeosun, resigned her position in 2018 after she was exposed for presenting a forged NYSC certificate for her appointment.

A civil society organisation, Centre for Social Justice Equity and Transparency (CESJECT), has called for the immediate arrest of a former finance minister, Kemi Adeosun, for forging her NYSC certificate.

This was contained a statement by its Executive Director, Kolawole Johnson, on Monday.

PREMIUM TIMES had in an exclusive report exposed Mrs Adeosun’s failure to participate in the one-year national youth service scheme.

The report revealed how Mrs Adeosun forged an exemption certificate many years after graduation which she presented as a substitute for a passing-out certificate.

Her official credentials obtained by PREMIUM TIMES showed that the minister paraded a purported NYSC exemption certificate, which she said was issued in September 2009, granting her exemption from the mandatory service on account of age.

In what appears to be a reprieve from a court on Wednesday, the Federal High Court in Abuja ruled that Mrs Adeosun did not breach any law by being appointed to the ministerial position in 2015 without participating in the NYSC scheme.

Although Mrs Adesosun forged her NYSC certificate to be appointed minister, the issue of forgery was not brought before the court as the federal government has refused to prosecute her for that.

Taiwo Taiwo, the judge, held that Mrs Adeosun, as of the time she graduated from a United Kingdom university at 22 in 1989, was a British citizen who was not qualified to participate in the scheme.

Reacting to the judgment, the group accused the former minister and her alleged conspirators of trying to soil the reputation of the NYSC as a scheme.

It said before her resignation, Mrs Adeosun admitted forging the NYSC certificate that she was using and had no moral ground to continue in public office after which she was sneaked out of the country to avoid being arrested by security agencies.

The group said it was appalling to realise that someone who forged her way into a very sensitive position as minister of finance of the Federal Republic of Nigeria could be treated with levity instead of prosecuting her.

The Centre for Social Justice, Equity and Transparency received the news of the fictitious judgement that freed Mrs Kemi Adeosun, ex- Finance Minister in the first term of President Muhammadu Buhari with mixed feelings.

It will be recalled that in 2018 Kemi Adeosun was accused of forging her NYSC certificate and that led to her resignation as a minister of the Federal Republic of Nigeria.

Before her resignation she had admitted forging the NYSC certificate that she was using and had no moral ground to continue in public office which led to her resignation. She was subsequently sneaked out of the country to avoid being arrested by security agencies which irked the anger of many Nigerians till date.

Recently Nigerians had begun to see the hands of the conspirators that sneaked her out of the country to avoid arrest rearing its head again. Kemi Adeosun appeared from the blues and was seen launching a foundation in Nigeria. As if that was not enough, a few days ago Nigerians woke up to the rude shock of a court judgement vindicating her complicity in the forgery and possession of fake NYSC certificate days after her showmanship in Lagos.

All these took place in connivance with her conspirators in high places who are bent on soiling the reputation of the NYSC as a scheme, re-write our status as regards to Nigerian citizenship and the rule of law as applicable to all citizens of the country.

It’s quite appalling to realize that someone who had forged her way into a very sensitive position as Minister of Finance of the Federal Republic could be treated with levity instead of persecuting her to establish our sovereignty and show the world that we are a country guided by the rule of law.

CESJET wishes to draw the attention of Kemi and her handlers to the recent happenings in neighbouring South Africa where a former President is currently languishing in prison for contempt of court. Kemi’s status doesn’t in any way equate to the office which Comrade Jacob Zuma once held in that country and could be tried yet our own cannot be made to account for her acts and deeds. This is a shame on all Nigerians.

We wonder how a court could delve into the said judgement that vindicated someone who has confessed to forgery just to set a negative precedent and the bastardization of our judicial system. Especially in an incident that has been well thought out to humiliate the people of Nigeria that have been hurt by her actions.

Her comments after the fictitious judgement expose her stubborn tenacity towards the crime she admitted to have committed and hence has the audacity to maneuver our judicial system with a glaring bizarre.

The pain of Nigerians occasioned by Kemi Adeosun who was clearly not qualified to manage our economy but yet forged her way into such an enormous position cannot be ignored. This is why the Board of CESJET joined other men of good conscience to call for her immediate arrest and persecution for forgery, a crime she has already confessed to in order to appease the conscience of the good people of Nigeria for the pain they have been subjected to by her actions.

We call on well-meaning Nigerians and Patriots to rise up as statesmen and protect the institutions that have made us who we are as a nation, especially the judiciary to avoid these kinds of embarrassing judgements emanating from our judicial system which are ridiculing the Nigeria judicial system before the international community.

We therefore give a Grace of 48 hrs for Kemi Adeosun to be arrested to face persecution for a crime she has already admitted to have commit to avoid a mass action of Nigerians against the judicial system of this country or Mrs Kemi Adeosun should honorably surrender herself to the law enforcement authorities and face persecution.

Rallying against the third wave of COVID-19 – urgently!, By Babajide Sanwo-Olu