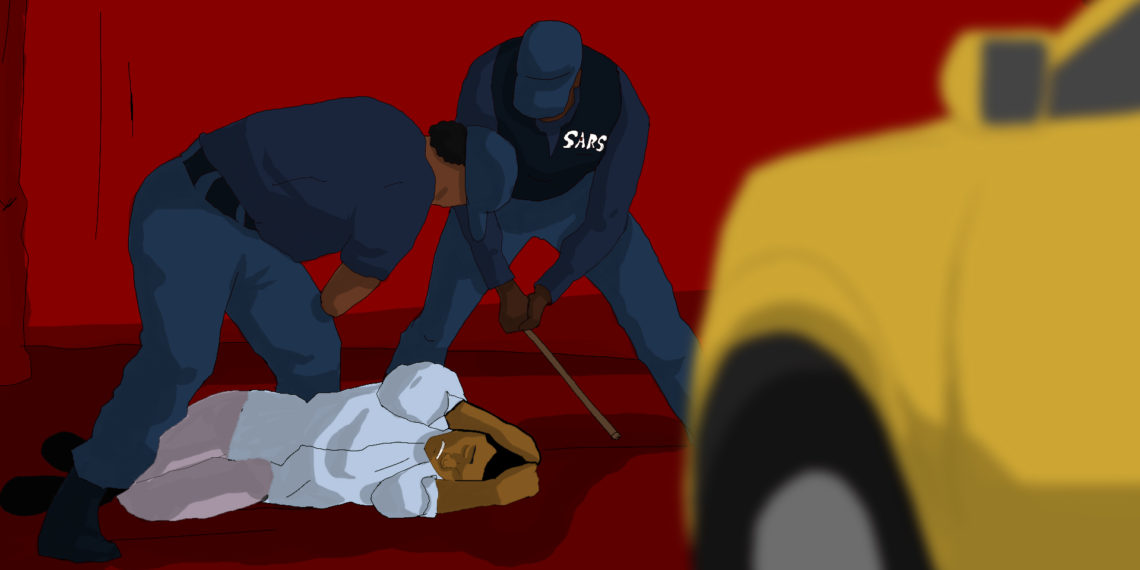 The SARS Officers beat Eric till he became unconscious, then threw him into their car and sped off

On one sunny day, SARS officers stormed a neighbourhood in Ajegunle, Lagos. They were on a mission to arrest a suspect.

Eric, who shared his residence with some friends, asked for the car to be moved because it was blocking movement. Though the car was eventually moved, so was Eric – badly beaten and unconscious.

The SARS operatives who parked the car were in Eric’s neighbourhood to make an arrest. Having ransacked the house at 39 Nosamu Street, which they believed was the family home of their target, known as ‘Popo’, they did not find Popo. He apparently did not even live there. 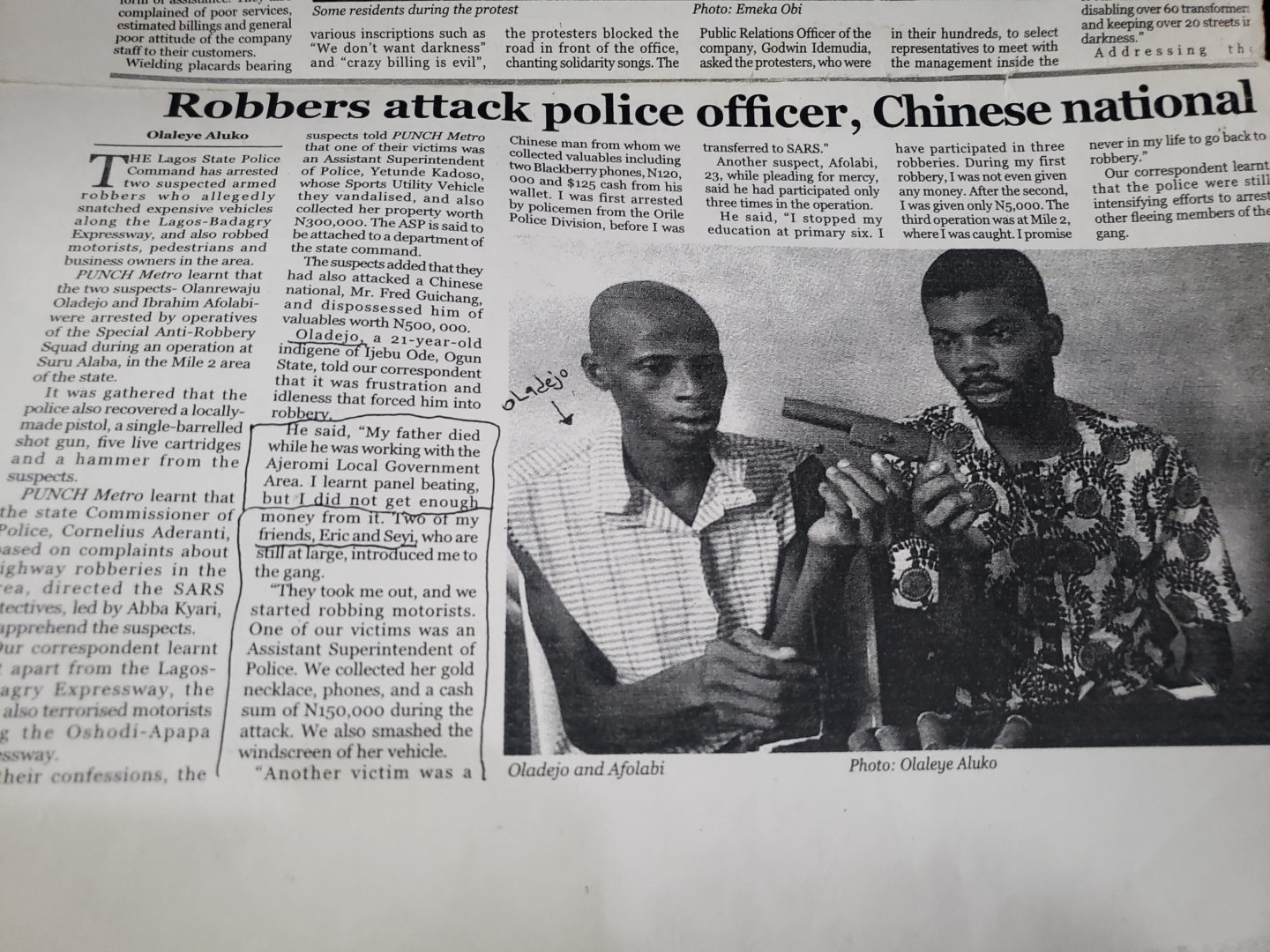 Frustrated by their failed arrest, hearing Eric ask about the car further annoyed them.

“Their next action was to vehemently descend on Eric with serious anger,” Bosah Emeka, a community activist, said in a letter sent to the Onikan office of the Assistant Inspector-General of Police.

The aggression the SARS operatives had reserved for the Popo arrest was poured out on poor Eric, who they beat to the point of unconsciousness. 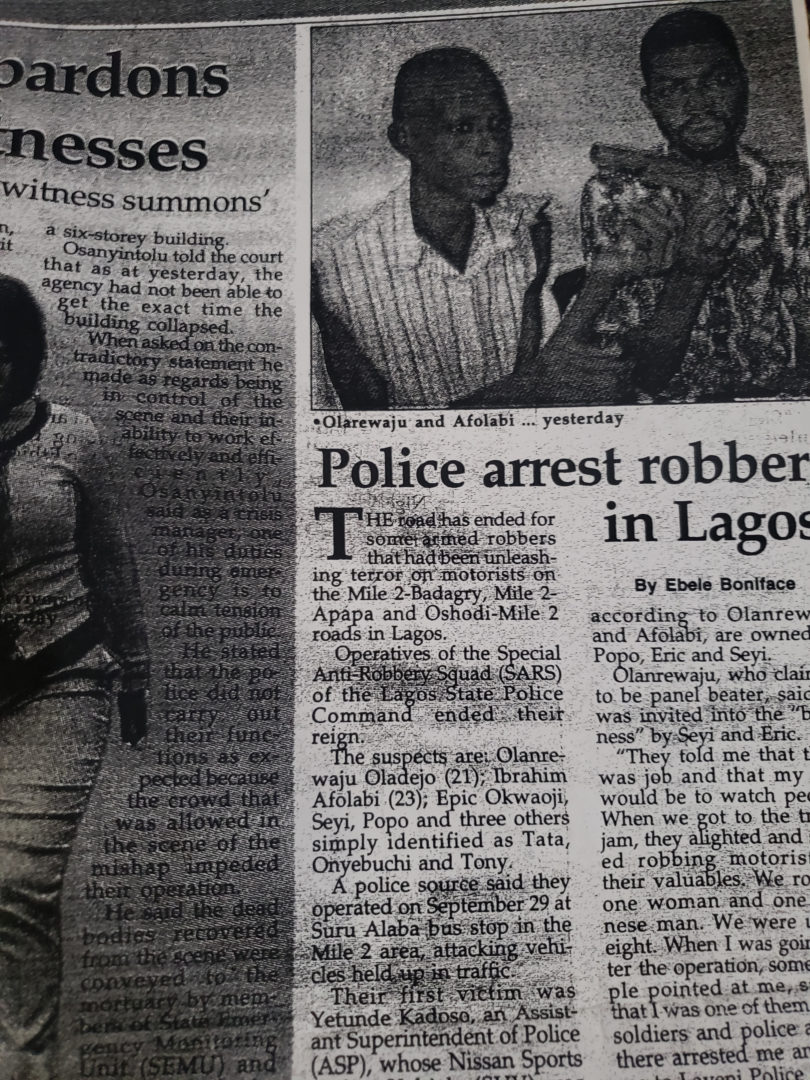 Pleas by community residents for the police officers to exercise restraint were ignored. Eric’s battered body was then thrown into the back of the Sienna car, which sped off.

It’s been six years since the car disappeared into the distance.

Family and friends of Eric Okwaji, as well as residents of Ajegunle Apapa in Lagos, have since not seen or heard from the young man.

One of the officers who participated in the violent incident gave his name as Sergeant Samuel C.Y. He left a mobile number, asking for any enquiries about the condition and whereabouts of Eric to be directed to him.

But each time a family member or neighbour called, he asked for money to be paid before he could give out any information.

“When we called him for the release of Eric, he demanded N400,000,” Lawrence Macaulay, Eric’s father, said. “We begged him but he did not listen.”

Once Mr Macaulay, a retired civil servant, realised he could not raise the bribe demanded, he set out on his own, visiting different police stations in search of his son. The Ajeromi Ifelodun Community Movement also sent out dispatches to different police units and NGOs asking for help to find Eric.

In one of such letters, addressed to Amnesty International, the association revealed they had sent search parties to Abuja “to no avail”.

While insisting on his demand for the N400,000 bribe, Sergeant Samuel evaded Eric’s family, preferring to connect on phone and not in person. “Anytime we wanted to meet him, he would say, ‘Come, but you will not meet me’,” Mr Macaulay recalled. “Anytime we got to a station we had been directed to, they would claim they did not know him; or that there was no Sergeant Samuel in that station.”

In a plan to track down the dubious sergeant, Emmanuella, Eric’s sister, connected with Sergeant Samuel via WhatsApp. Her good looks seemed to have caught the attention of the sergeant, who invited her for an evening hangout at a local bar. In their WhatsApp chats, Sergeant Samuel gave his name to Emmanuella as Stephen Bayo.

Even though this scheduled meeting provided a rare opportunity to meet Sergeant Samuel in person, Mr Macaulay discouraged the idea. He said he did not want his daughter, whom he describes as “beautiful”, to come into contact with a man who had been involved in the abduction of his son. 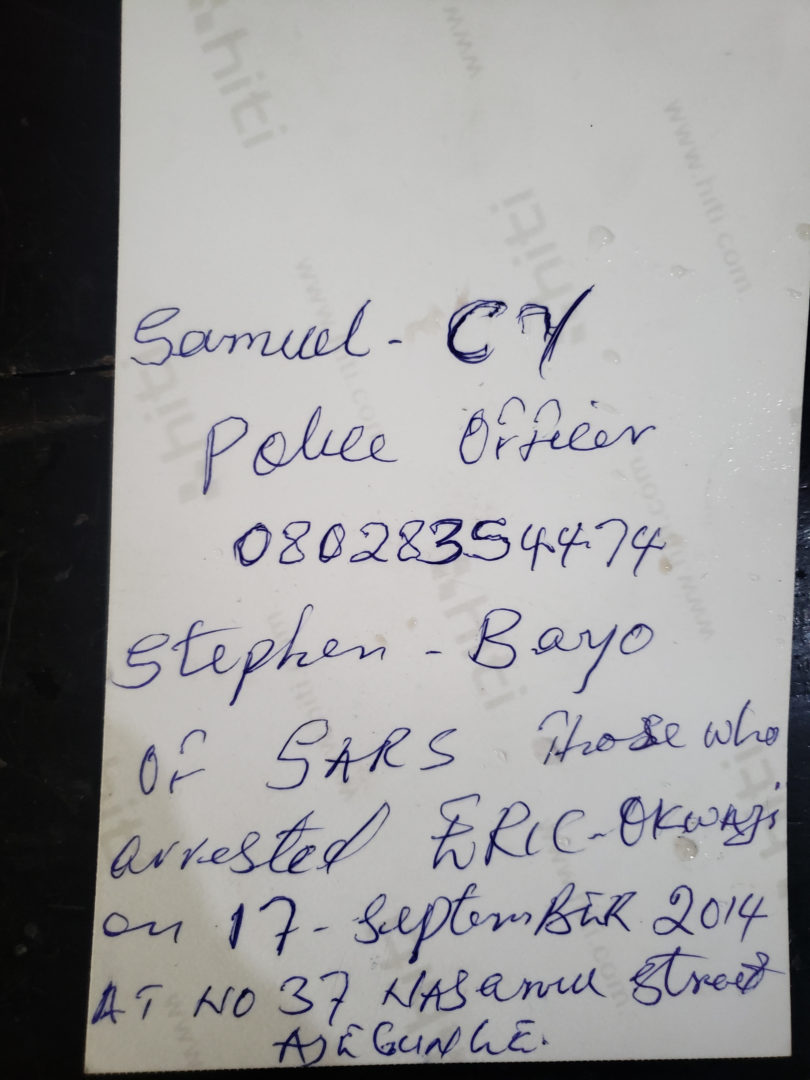 Besides, Mr Macaulay thought Sergeant Samuel’s Whatsapp profile photo, as well as the name Stephen Bayo – which he suspected could be Sergeant Samuel’s real name – were enough leads to go on in terms of getting to the bottom of the issue. “I thought it would help our case,” Mr Macaulay said.

But it didn’t. The sergeant continued to evade the family, keeping his identity a secret while still demanding the N400, 000 ransom.

A quick search on Truecaller, a caller identification app, shows the name attached to the number given by Sergeant Samuel as “IPO Tayo Sars”.

Abba Kyari, the celebrity cop who now leads the Inspector General of Police’s Intelligence Response Team (IGP-IRT), was the Officer-in-Charge of SARS when 34-year old Eric was arrested.

Mr Macaulay, in the company of one Mr Fatoki, a lawyer from the Nigerian Bar Association (NBA), made a complaint to Mr Kyari about the unlawful arrest of his son.

Mr Kyari admitted that Eric was in his custody, but claimed he had been arrested for highway robbery, as against the known fact of being beaten and abducted on Nosamu Street in Lagos. 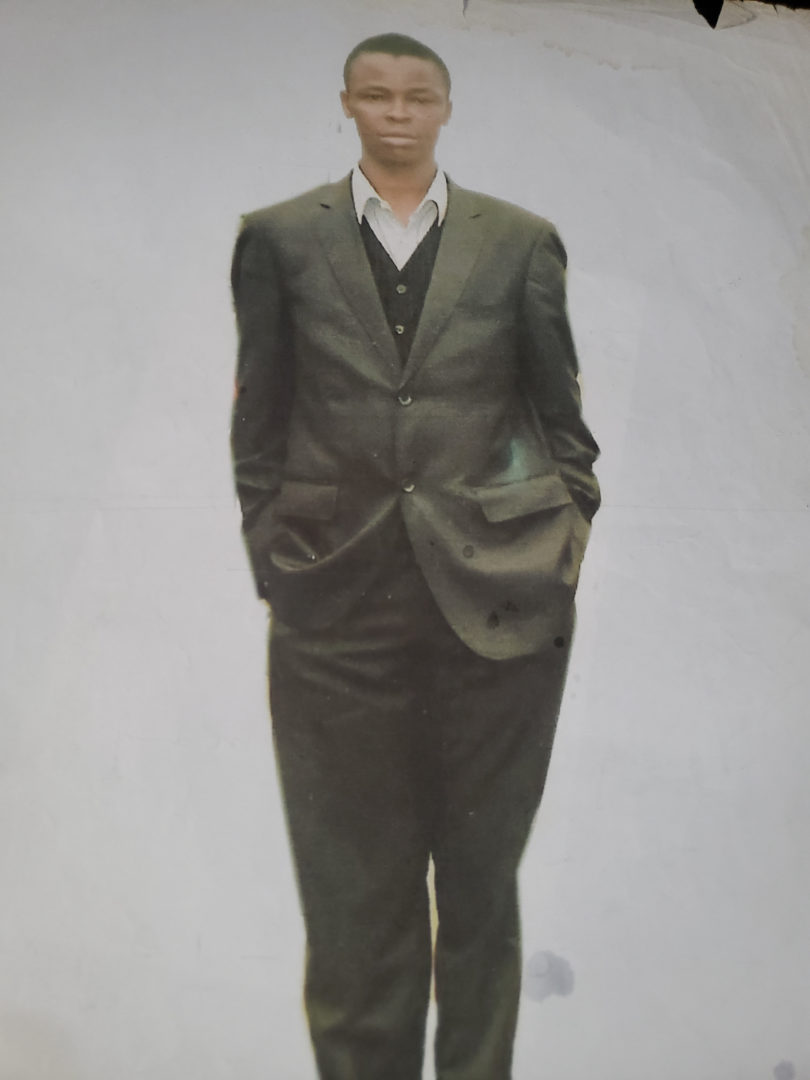 Convinced that there had been a mix-up that could be resolved with some legal backing, Mr Macaulay and Mr Fatoki left hoping to return on a later date to secure Eric’s release.

But things didn’t quite work out that way.

Mr Macaulay, whose pension earnings as a retired civil servant were irregular, could not meet the financial demands of his lawyer, Mr Fatoki. He had assumed that given the sensitive nature of the case, Mr Fatoki would consider helping him pro bono.

“We did not go back to Kyari because the NBA lawyer started asking for money,” Mr Macaulay recounted. “After I had given him N20,000, he took me to his chambers and asked that I pay more, but I did not have any money.”

On Thursday, November 6, 2014, The Nation newspaper published an article about two alleged armed robbers arrested by Abba Kayari’s SARS operatives. The men, identified as Olarenwaju Oladejo and Ibrahim Afolabi, both in their early 20s, confessed to armed robbery and indicted an “Eric Okowaji” and two others, who were reported “at large” at the time.

“My father died while he was working with the Ajeromi Local Government Area. I learnt panel beating but did not get enough money from it. Two of my friends, Eric (Okowaji) and Seyi, who is still at large, introduced me to the gang,” one of the suspects, Mr Oladejo, was quoted to have said in another publication by The Punch newspaper.

The photo of the “Eric Okowaji” in question was not attached to the publications by either The Nation or The Punch newspaper.

Could this Eric be the same “Eric Okwaji” who had been whisked away in that gold-painted Sienna car a few weeks earlier?

Mr Macaulay insists that the “Eric Okowaji” referred to by armed robbers could never be his son, Eric Okwaji, who he said was a decent man.

“Eric was a footballer, and also worked at Bayelsa Motor Park Boundary before he was taken away,” Mr Macaulay said.

It has been exactly six years and seven months since Eric was inexplicably abducted on the streets of Lagos.

Last October, as years of SARS-related brutality reached its peak, provoking protests nationwide and garnering global attention for Nigeria, the anguish of aggrieved families hit close to home. One of such families, Mr Macaulay and his household continue to live in perpetual anxiety, not knowing where their beloved Eric is, or even whether he is alive or not.

Under the pressure of the #ENDSARS protests, the President Muhammadu Buhari-led administration disbanded the controversial SARS unit, but the scars of their atrocities remain, with many questions unanswered, many mysteries unsolved.

Mr Kyari, the senior police officer who was responsible for SARS operations in Lagos when Eric was taken by the unit’s officers six years ago, is still being pursued for answers.

Multiple calls to Mr Kyari’s phone number only get his voice mail. He also has not responded to text messages sent to the same number.

Meanwhile, Mr Macaulay has approached the Lagos State Judicial Panel on Restitution for Victims of SARS Related Abuse and Other Matters to seek answers.

This is a developing story. Expect more revelations as we try to find Eric Okwaji.