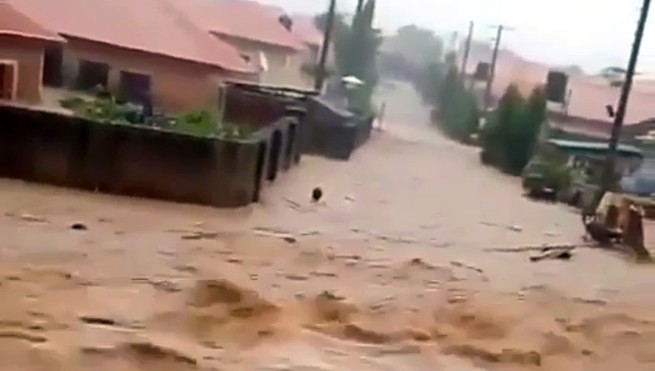 At least 1,000 persons have been rendered homeless by the devastation

The first set of rains in the new season has come with heavy rainstorms, destroying over 200 houses in Ekiti in the last one week.

It is estimated that over 1,000 persons have been rendered homeless following the devastation, according to the State Emergency Management Agency (SEMA).

Friday’s downpour began at about 6 p.m., and was accompanied by strong winds which wreaked havoc on residential buildings in the town.

Displaced persons are taking refuge in a neighbouring community.

Apart from private homes, the storms destroyed two public primary schools and buildings belonging to Pentecostal and Catholic Churches in the town.

While inspecting the wreckage on Saturday, the SEMA Chairperson, Sunday Adebomi, described the incident as strange in the history of the community and the entire local government .

“The Governor of Ekiti State, Dr Kayode Fayemi was particularly happy that no life was lost during the storm, which affected about 200 houses in this town,” he said.

“We learnt over 1,000 residents had been displaced already.

“We are here to assess the level of destruction by the storm which was a mystery.

“The present administration in Ekiti State under the leadership of Dr Fayemi would do everything within its capacity to ameliorate the plights of the victims.

“The government commiserates with the victims and I advise our people to as a matter of urgency embark on the planting of trees in their environment. The move would further avoid future occurrence of such an unfortunate incident.”

A community leader and victim of the storm, Oladipo Isaac, lamented the destruction and called on the government to intervene quickly.

“As you can see many houses including schools and churches have been blown off,” he told reporters.

“We appeal to the government and and public spirited individuals to come to the aid of our community. This kind of disaster is happening for the first time since I was born 75 years ago in this community.”

In a similar event, at least 20 hectares of cocoa and kolanut plantations were razed by a raging midnight inferno in Isan-Ekiti, the hometown of the governor.

The SEMA boss, who also visited the ravaged farm sites located along Ipere-Ekiti road, described the fire disaster as unfortunate.

He said the government was compiling the names of affected farmers and would ensure they were compensated.

A community leader in Isan town, Ray Akin-Oguntosin, said the fire affected cocoa, kolanut, orange, and coffee plantations and had rendered farmers in the town jobless.

“We appeal to both the Federal and Ekiti state governments to come to the aid of the community over the disaster,” he said.

“We have contacted the relevant state and federal authorities to come to the aid of our people and I also appeal to the indigenes of the town both at home and in the diaspora to come home and help their people.”