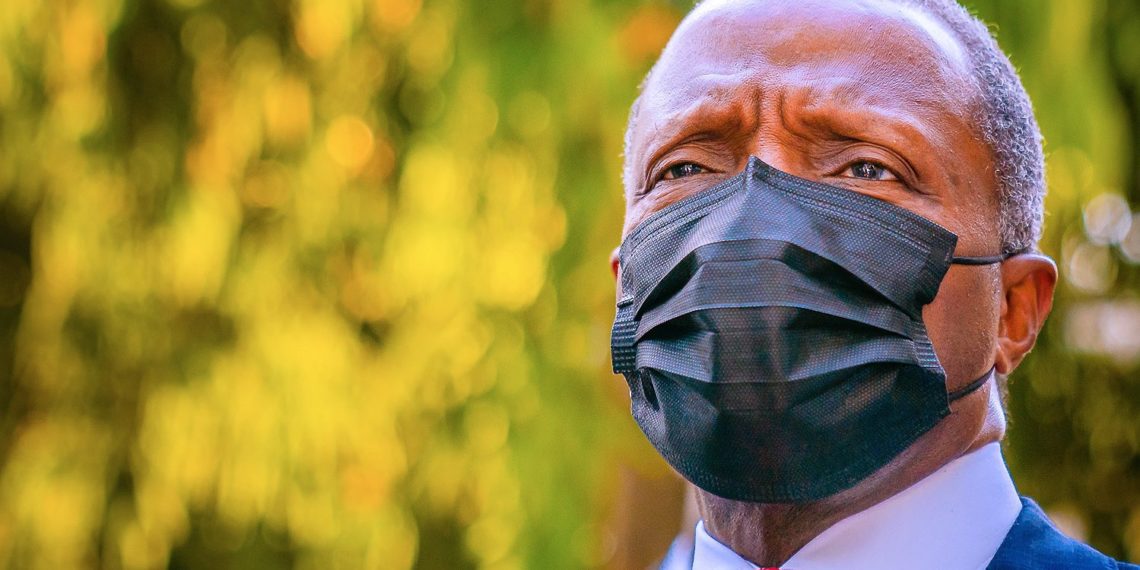 The president showered praises on Mr Osinbajo on his 64th birthday.

Presidential spokesperson Garba Shehu quoted the president as saying Mr Osinbajo was not only admirably competent, but also exudes confidence and passion in the performance of his job.

The president showered the praises on Mr Osinbajo to mark his 64th birthday.

Mr Buhari, who picked Mr Osinbajo as his running mate in 2014, said he does not regret his action as the vice president has proven himself to be a patient politician who has not failed in the discharge of his duties.

“I’m proud to have selected Osinbajo as my running mate and he has given a good account of himself since our journey began in 2015.”

“The Vice President is a cool-headed gentleman who puts the interest of Nigeria above other narrow considerations.”

“Vice President Osinbajo is an incredibly patient politician who demonstrates remarkable intellectual and mental energy in the discharge of his duties,” the president was quoted to have said.

He wished him many more prosperous years and God’s continued guidance.

Similarly, Speaker of the House of Representatives, Femi Gbajabiamila, described the vice president as a patriot and democrat, whose services to his fatherland have been commendable, particularly since he became the Vice President in 2015.

In a statement he personally signed, the speaker noted that the vice president has for many decades dedicated himself to serving humanity, serving variously as a teacher (lecturer), pastor and a politician of repute.

“As a lawyer, Prof. Osinbajo has distinguished himself and rose to become not only a professor of law but also a Senior Advocate of Nigeria (SAN), which is the pinnacle of law practice in the country.”

The speaker recalled the Mr Osinbajo’s laudable contributions to the development of Lagos State when he served as the Attorney General and Commissioner for Justice for eight years – from 1999 to 2007.

He said the younger generations of Nigerians have a lot to learn from the life of Mr Osinbajo.

“His Excellency, the Vice President, Prof. Yemi Osinbajo, is one Nigerian that should be celebrated at every point in time, but the occasion of his 64th birthday calls for more celebration.

“I, therefore, wish to join millions of Nigerians to celebrate the Vice President on this memorable occasion.

In a statement by his Chief Press Secretary, Olisa Ifeajika, Mr Okowa lauded Mr Osinbajo for his astute contributions toward good governance in the country.

He said that in spite of challenges, the vice president had continued to make quality contributions to the stability and growth of Nigeria’s economy.

Mr Okowa particularly recalled Osinbajo’s invaluable role in the enthronement of peace in the Niger Delta, saying that his efforts helped in halting agitations and destruction of oil facilities in the region.

According to him, the vice president deserves some accolades for his leadership role in improving the nation’s economy, especially as Chairman of National Economic Council (NEC).

The governor added that Mr Osinbajo’s “selfless service to the nation and his numerous accomplishments in personal and public life” readily came to mind at a time like this.

“As Chairman of the National Economic Council, you have made remarkable contributions to the growth and development of the nation’s economy with the support of governors and other stakeholders.

“On behalf of my family, the government and people of Delta, I congratulate His Excellency, the Vice President of Nigeria, Professor Yemi Osinbajo, as he celebrates his 64th birth anniversary.

“Your Excellency, we are proud of your sterling accomplishments, uncommon patriotism and humility which have remained the hallmark of your leadership since you became the Vice President of our great country.

“These qualities that you epitomise are some of the worthy traits that inspires us in our quest to build a Stronger Delta for our people.

“As people of the Niger Delta, we must thank you for your diplomatic shuttles that led to the resolution of agitations and destruction of oil assets in the region.

“On this occasion of your 64th birth anniversary, it is my prayer and that of all Deltans that God will continue to bless you with good health, wisdom and many more years in His service and country,” he stated.