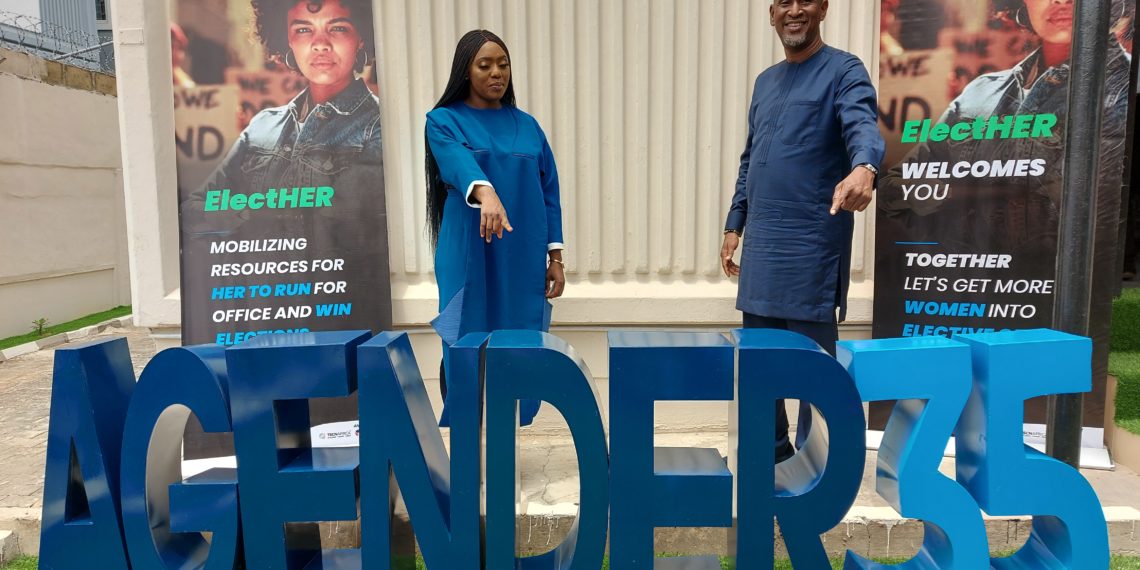 Ibijoke Faborode and Akintoye Akindele at the Agender35 launch.

Through the campaign, the group will provide direct funding to 35 women running for office.

A bold $10 million fund campaign to give female faces to the complexion of elective legislative offices in the country come 2023 was, Monday, launched in Lagos by ElectHer, a non-partisan gender organisation set up to foster the participation of women in politics.

Speaking at the Launch, Ibijoke Faborode, the Co-founder of ElectHER said the campaign, tagged Agender35, is a deliberate effort to significantly de-risk the process of women running for elective offices and to increase women’s political representation in Nigeria by 2023.

Through the campaign, the group will provide direct funding to 35 women, 15 for the House of Representatives, 15 for House of Assemblies, three for Senatorial offices and two for executive offices.

Ms Faborode said ElectHer has already secured $2 million of the $10 million Agender35 campaign which will be used to empower 1000 women and directly back 35 women to run for political office in 2023.

The $2 million was donated by Platform Capital Group, a private sector ally, according to Ms. Faborode, who said Agender35 is a movement that requires the collective effort of all critical stakeholders – citizens, the media, political parties, the private sector, the third sector but also the government.

She added that the group will advocate for the legislation of a minimum 35 per cent women’s representation quota in appointive and elective offices in Nigeria.

“If we maintain the current level of ignorance on socio-political issues, there will be no country in the next two decades.

“The gross under-representation of Nigerian women in elective office poses a severe threat to nation-building and socio-economic growth, given that women constitute about 50% of the population.

“To put this into context, Nigeria currently has the lowest representation of women across parliament in Africa, at a dismal 4.1%. In 2019, only 5 out of 73 candidates ran for the presidency and none of them was among the top three most voted candidates in the presidential race,” she said.

She said the inequality gap in Nigerian politics has led to ”poor policy outcomes and the low prioritisation of social development over the years, crippling socio-economic progression in the country”.

Also speaking at the launch, Akintoye Akindele, the Executive Director of Platform Capital Group said women should be empowered to run for political offices ”as there are about 50 per cent women in the population, and the number will keep increasing”.

“The future is feminine and the future is black. It only makes sense to empower women to go into politics. Black people will be material in every conversation, as our population increase, so also will women,” he said.

Mr Akindele said women should be given equal opportunity and a fair ride in politics ”as this is material to having progressive policies and laws in Nigeria”.

“We did a research of how much it costs to win elections in Nigeria, when women show interest in politics, the goal is to match, skill, scale and support women,” he said.

Meanwhile, ElectHER called on organisations and individuals to support the Agender35 and its goal of empowering 1000 women, ”directly funding 35 women to run for political offices and also winning in the 2023 elections”.