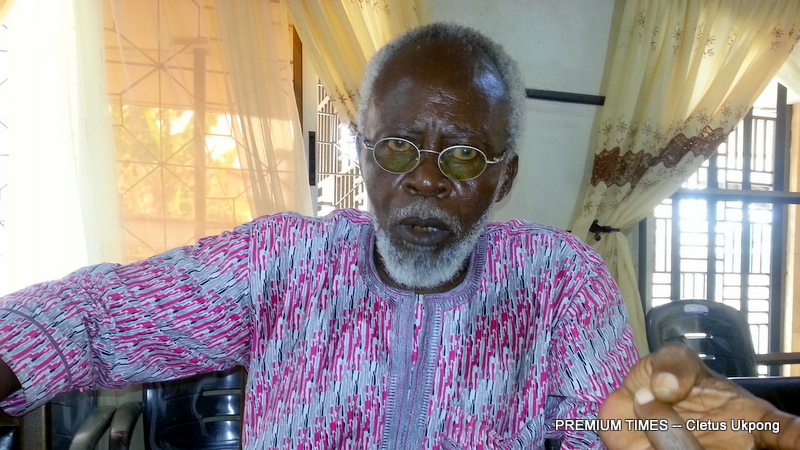 I would have died, if not for Otedola, other Nigerians – Ailing lecturer

Nigerian billionaire, Femi Otedola, other Nigerians rallied support for University of Uyo lecturer, Inih Ebong, who suffered cardiac failure after he was unjustly sacked by the university about 20 years ago.

Inih Ebong, a Nigerian lecturer who became gravely ill after he was unjustly sacked from the University of Uyo almost two decades ago, said he would have died if not for the intervention from Nigerian billionaire, Femi Otedola, and other Nigerians.

Diagnosed with cardiac failure and too broke to cater for his welfare and health, many Nigerians contributed money to the lecturer last year, after PREMIUM TIMES broke the story of his illness and a human rights lawyer, Inibehe Effiong, publicly appealed for financial support for him.

Mr Otedola is paying for MrEbong’s medical treatment in Uyo.

Mr Ebong, was an associate professor in the Department of Theatre Arts, University of Uyo, when his appointment was unlawfully terminated in 2002. Akpan Ekpo and Peter Effiong were the vice-chancellor and registrar of the institution respectively at the time.

Mr Ebong, before his sack, had a running battle with Messrs Ekpo and Effiong, who saw him as a thorn in their side for speaking up regularly against alleged maladministration and corruption in the school.

Mr Ebong, though yet to get back his job at the University of Uyo and still recuperating at home, took out time to thank Nigerians for helping him.

He said he was able to pay his medical bills, buy prescription drugs, and provide “healthy food and fruits” for himself and his family from the money Nigerians sent to him.

“I wished I could reach out and contact you one-on-one, but this is impossible.

“Permit then the use of this space and medium to get across to each and everyone of you and express my profound gratitude for the outpour of love you showered on me, and the generous donations you made that I might live,” Mr Ebong said in an open letter to Mr Otedola and other Nigerians.

He personally handed a hard copy of the letter to PREMIUM TIMES at his Uyo residence, on Saturday.

“You answered the clarion call with love at a time when I precariously stood on the precipice with no other volition than to plunge headlong, albeit unwillingly, into the waiting arms and bosom of the Great Beyond!

“Your outpour of love, concern and care, made me recover from my long and protracted illness when all hopes were lost and for this, I remain eternally grateful to you and to God.”

He also thanked Nigerians in the Diasporas who sent help to him.

“I am especially indebted to Inibehe Effiong, a Lagos-based lawyer and human rights activist, and to the management and staff of Premium Times. Both Barrister Effiong and Premium Times told my story to the world and elicited the spontaneous, overwhelming response from you.

“Last but by no means the least are my dear wife and children. They bore all the troubles and anxiety with profound understanding, love and care. They were always there for me every hour of the day and night, in the hospital and at home.

“Above all, my greatest thanks goes to the Almighty God who has made all these happen in my life, and found each and everyone of you as worthy vessels and channels of goodness and selfless love in restoring normal health to my body,” Mr Ebong said.

Mr Ebong, in the letter, said as part of his deteriorating health, he had insomnia, mental disturbances, and was bed-ridden for weeks.

He talked about the recovery process, and said he was no longer bed-ridden.

“I now move about freely, unattended, and I do certain chores unaided – a big relief for my wife,” he said.

“As much as I would say that I am much healthier now, with a blood pressure of 90/60 mmHg as at the last check some two to three weeks ago, and that I am religiously taking my medications and keeping up with routine check-ups in the hospitals, I experience occasional swelling in the legs and instantaneous rapid heavy breathing,” he said.

Staying the Course of Justice, Beyond Partial Wins, By Rinu Oduala

Police to deploy 272 special constables to communities in Enugu- Official