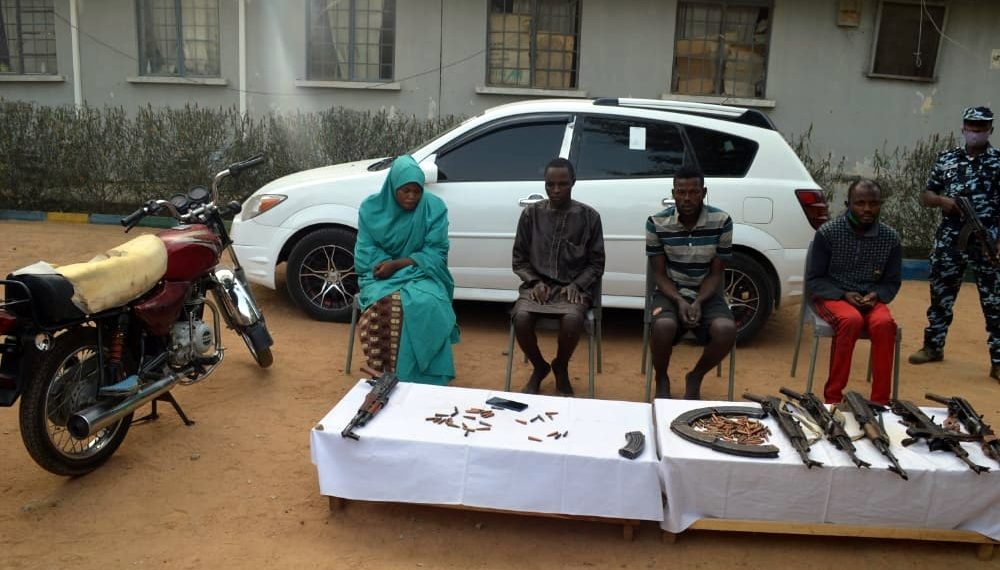 The police say the suspect's husband was a ''notorious cattle rustler who had been killed while stealing cows''.

The police in Kano on Wednesday paraded a 23-year-old widow, Maryam Muhammad, and three other suspected kidnappers, allegedly operating in Kano and Zamfara states.

Ms Muhammad is from Butsa village in Gusau Local Government Area of Zamfara State. The police said her husband was a notorious cattle rustler who had been killed while stealing cows.

Parading the suspects, the police spokesperson in Kano, Abdullahi Haruna, said they were arrested on Friday at an apartment in Kano where they were holding a victim, Mohammed Sanusi.

Mr Haruna said the suspects had demanded N10 million ransom from Mr Sanusi’s parents when they were arrested.

He said the police rescued the victim unhurt after engaging his kidnappers in a fierce gun battle.

The police spokesperson said Mr Sanusi’s father, Sanusi Ado of Galadanchi Quarters in Gwale Local Government Area of Kano, had on January 12 reported that his 29-year old son had been kidnapped and N10million ransom had been demanded from him.

He said following the complaint, the commissioner of police in the state, Habu Sani, directed the Operation Puff Adder, led by Shehu Dahiru, to go after the kidnappers.

“The team swiftly swung into action, and following credible intelligence, on 15 January, 2021, that is three days after the report, raided a rented apartment located at Jaba Quarters, Ungogo LGA of Kano State where the victim was held hostage.

“The gallant team cordoned (off) the area, engaged the occupants of the house in a fierce gun duel, successfully rescued the victim unhurt and arrested the suspects,” Mr Haruna said.

The three other aspects in police custody are Sani Ibrahim and Shamsuddeen Suleiman of Butsa village in Zamfara State and Ishaq Khalil of Rijiyar Lemo Quarters in Fagge Local Government Area of Kano State.

Mr Haruna said the suspects were reportedly involved in kidnappings in Kano and Zamfara states.

He said one AK-47 rifle, one magazine loaded with 30 rounds of live ammunition and an unregistered motorcycle were recovered from them.

According to the police spokesperson, the husband of the female suspect, Sani Ismail of Niger State, was killed in Zamfara while carting away rustled cows.

Mr Haruna said after the death of her husband, Ms Muhammad’s brother, Hamza Dogo, also a suspected kidnapper, relocated her to Kano where she rented apartments in Unguwa Uku, Panshekara and Maidile quarters.

The police said Ms Muhammad later moved to Jaba Quarters and rented another apartment for N600,000 per annum, which she allegedly turned into a kidnappers’ den.

‘How we trapped victim’

Speaking with journalists, Ms Muhammad said she had called the victim on phone at about 8 p.m. on January 12 to bring her a new Samsung handset after agreeing on the price at N60,000.

She said Mr Sanusi then drove in his Toyota car to the apartment with the handset. She said as soon as they opened the gate and he entered the house, the four suspects attacked and tied him up.

She said they then took his car to Zamfara State, from where they contacted his family to demand the ransom for his release.

Ms Muhammad said their plan was to kill Mr Sanusi after collecting the ransom because they realised the victim knew the location of the apartment and could recognise them too.

She also said on October 2 last year they had kidnapped Shafiu Umar of Naibawa Quarters in Kumbotso Local Government Area of Kano State and took him to Zamfara State.

She said the gang had collected ransoms of N10 million, a brand new motorcycle and a Toyota Corolla LE car worth N2.5 million from other victims.

Mr Haruna told journalists that the police commissioner has ordered officers to find the accomplices of the syndicate and recover their operational weapons.

He said the commissioner also advised Kano residents to be extra careful in renting apartments to strangers.