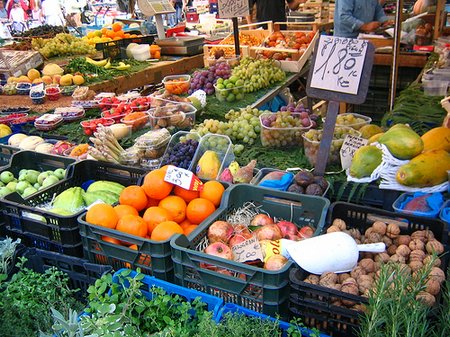 FILE: Food items on display in a market used to illustrate the story

The head of the presidential economic advisory council says Naira should be trading around N439 a dollar at the official market.

The Nigerian government spent N1.85 trillion on food imports in 2020 after it closed the country’s land borders, the chairman of the presidential economic advisory council, Doyin Salami, has said.

Mr Salami disclosed this at the 2021 National Economic Outlook event organised by the Chartered Institute of Bankers of Nigeria on Tuesday. The programme took place virtually.

Nigeria closed its land border in August 2019 to the movement of goods. The government said it planned to curb the smuggling of rice, other commodities and weapons.

“Despite border closure, our national import of food amounted to N1.85 trillion between January and September, 2020, a 62 per cent increase when compared to the same period in 2019,” Mr Salami was quoted by The Nation as saying.

“This suggests a weakness in our ability to feed ourselves and raises the need to consider review of intervention policies in agriculture.”

According to him, serious climatic concerns are undermining agricultural output with 2.5 million farmers being impacted by flooding in 2019.

“Agriculture continues to decelerate growing at 1.7 per cent year to date while consumer sensitive sectors like manufacturing and distribution continue to contract in double digits,” he said.

“By the measure that drives the value of the Naira based on the Naira/dollar inflation differential, the currency should be trading around N439 a dollar at the official market.”

He added that foreign exchange rate convergence, market reflective rates and transparent determination mechanism balance of payment imbalances are large and would remain key questions in 2021.

READ ALSO: Nigeria’s Border Closure And Anti-Smuggling Policy: An Investigation of the Realities on the Ground

“The COVID-19 shock of 2020 represents the third major shock to the Nigerian economy in 12 years,” he said.

“Ahead of the crisis, the Nigerian economy was contending with a set of pre-existing conditions such as macro instability, stagflation – slow growth and rising inflation, pressure on households – in the form of rising inflation, unemployment, and poverty and pressure on corporate(s) margins – weak consumer and cost pressures,” Mr Salami said.

According to him, transport and hospitality sectors were gravely affected by the lockdowns in April/May as well as by voluntary containment measures and the imposed restrictions post lockdown.

“A health crisis morphed into an economic crisis resulting in humanitarian and in some cases, security challenges, a global development visiting great disruption to established norms – largely negative short-term impact but some positives – especially with technology deployment, the full impact of which will manifest in the years ahead,” he said.

“The oil and gas sector, given lower oil prices, OPEC quantity restrictions on Nigeria output and long standing impediments to investment in the sector not to mention the pass through of the sector, the government revenues and forex, to the rest economy is another major driver of recession.”