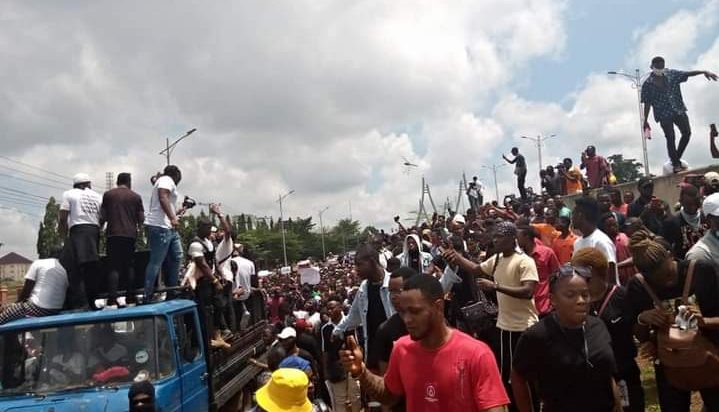 Why we resumed #EndSARS protest in Osun — Protester

The protesters want the judicial panel into police criminality disbanded because it has no #EndSARS protester as member.

The organisers of #EndSARS protests in Osun State have given reasons for the second phase of their agitation against police brutality.

PREMIUM TIMES reported that some youth on Monday stormed the state House of Assembly in Osogbo, the state capital, demanding audience from its leadership.

Similar protests were held in Lagos and the Federal Capital Territory (FCT).

Speaking with journalists later, the protesters said one of the reasons was to call for the disbandment of the State Panel of Inquiry against police brutality.

“The panel should be disbanded because no genuine #EndSARS protest member was included. We want the federal government to unfreeze the accounts of EndSARS protesters. We are peaceful protesters and we know our rights and we won’t give in to any intimidation.”

In his address to the youth, the speaker of the House of Assembly, Timothy Owoeye, promised to look into all issues raised by the protesters.

“We will also look into the composition of the panel by the time we get to the office. I will communicate with my colleagues and I believe that by (next) Monday, we will come up with a decision. We are into it together, we cannot run away as a responsible government,” he said.