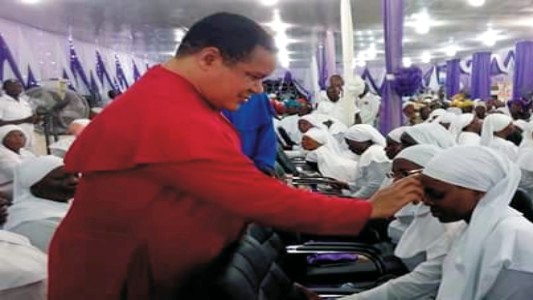 The founder of the Brotherhood of Star and Cross says the protests were triggered by lack of good governance.

The founder of the Brotherhood of Star and Cross, Olumba Olumba Obu, has tasked the Federal Government on good governance and attributed the lack of it to the recent breakout of the #Endsars mass protests.

Mr Olumba spoke on Saturday in Abuja during the international conference of the church tagged: “Transforming a Misguided World into Peace and Justice.”

Represented by the church’s Director of Evangelism, David Irefin, Mr Obu urged the government and religious leaderships to address the issue of injustice.

The one-day conference deliberated on challenges of #EndSARS protest, Covid-19, political violence, insecurity, among others.

He said the absence of good governance, care for the less-priviledged and the needy in the society promoted the recent mass protests.

“Many and more members of the human family are losing faith in the political systems and religious beliefs.

“The impact of Covid-19 on health and economy of the world are making many to lose faith in science.

“In fact, covid-19 appears to signal failure of science and technology, the human family is at a crossroad.

“In the absence of care and love for the widows, poor, the needy, oppressed, the unemployed and the masses by the ruling class, Nigeria witnessed the #Endsars protests across the country.

“#Endsars and other problems plaguing Nigeria can only be solved by good governance.

“There is no amount of meetings, conferences and peace committees by man that will bring about the needed peace and justice on earth.

It is not ordained by Father God that man would solve man’s problems but rather God himself,” he said.

A speaker at the event, Iyke Uzorma, a professor of Christian Education at St Thomas-a-Backet University, Canterbury, England, corroborated the cleric’s position in his paper.

Mr Uzorma called for peace through justice, adding that all human religions talk of peace and love, hence the need to apply such to solve societal challenges.

“It is much easier to destroy than to build. Justice is absolutely necessary to govern human society.

“Since all religions talk about peace and love, we all have a collective role to play in applying such to achieve the utmost goal for the society,” he said.

In his own paper, Yahaya Oyewole, a professor and the Deputy Imam, University of Ilorin, said Islam as a religion preaches religious harmony and love as bedrocks of societal development.

He said, “Islam hates violence and upholds unity, justice and promotion of peaceful co-existence with others for any society to achieve development.”

Nigeria’s earnings down by 60% — Sylva