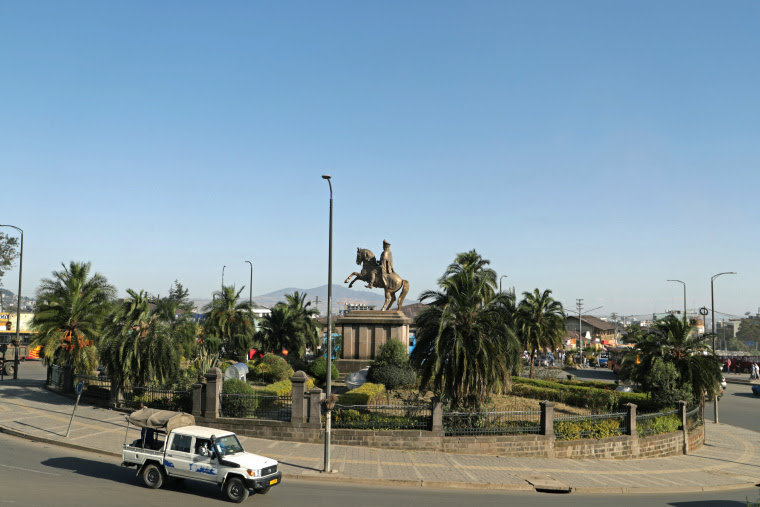 Members of Ethiopian Federal police ride in their pickup truck as they patrol along the street in Piassa neighborhood of Addis Ababa, Ethiopia November 4, 2020. REUTERS/Tiksa Negeri - RC2FWJ9WVBXO

CPJ called on Ethiopian authorities to immediately release broadcast journalist Bekalu Alamrew, who was arrested on November 4 and has not been formally charged.

Nairobi, November 10, 2020 — Today the Committee to Protect Journalists called on Ethiopian authorities to immediately release broadcast journalist Bekalu Alamrew, who was arrested on November 4 and has not been formally charged.

Three uniformed police officers and one plain-clothed officer arrested Bekalu from the Addis Ababa offices of the privately-owned Awlo Media Center, where Bekalu is employed, according to the outlet’s managing director Woldegiorgis Teklay, who spoke with CPJ via messaging app.

“Unfortunately, Bekalu Alamrew is only the latest Ethiopian journalist to be arrested on vague grounds and to be held by police without formal charges. This trend is a dangerous reversal of the early steps taken by Prime Minister Abiy Ahmed’s government to improve press freedom,” said CPJ Sub-Saharan Africa representative Muthoki Mumo. “Police should immediately release Bekalu Alamrew without charge and stop detaining journalists for their work.”

In a statement, Awlo Media Center, which was launched in 2019 and broadcasts current affairs programming on YouTube, said that the officers did not produce a warrant, refused to answer questions about why they were taking the journalist into custody, and told other staff members not to speak about the arrest. The officers also searched the offices and seized equipment including three laptops, Bekalu’s phone, a hard disk, notebooks and scripts, and a sound recorder, according to Woldegiorgis.

On November 6, Bekalu appeared at the Bole Sub-City Federal First Instance Court in Addis Ababa, where, according to Woldegiorgis, police made four accusations against him, including disseminating false information and smearing the Ethiopian government. In a third accusation, the journalist was alleged to have incited ethnic violence by reporting on the killing of ethnic Amharas in West Wollega, southwestern Ethiopia, though police did not name a specific report, Woldegiorgis said.

Yibekal Gizaw, the Head of National Human Rights Action Plan at the Office of the Federal Attorney General told CPJ via email that police arrested Bekalu on suspicion of contravening Ethiopia’s hate speech and disinformation law. Yibekal referenced an unspecified “media report [Bekalu] produced alleging that the Federal government and the national army were directly involved in the killing” of 200 ethnic Amharas, saying that the actual number of dead was 34. Yibekal did not specify which part of the law the journalist allegedly contravened. He said that a senior federal prosecutor assigned to the case today will “evaluate and decide if there is sufficient evidence to warrant [Bekalu’s] continued detention.”

Woldegiorgis told CPJ that Awlo Media Center reported on the death toll during the incident and its aftermath, changing its figures based on press releases issued by authorities. Media and rights groups reports from the immediate aftermath of the killings indicated that the exact death toll was uncertain. Woldegiorgis denied that the outlet accused the government of the killings, though said that it included voices that were critical of the government.

Bekalu was not formally charged during the court hearing but he was ordered to remain in police custody at the Bole Sub-City Police Station for six days while police conduct an investigation, Woldegiorgis said.

Authorities have previously targeted Bekalu and other journalists from Awlo Media Center. In a December 2019 Facebook post, Bekalu accused government officials of threatening him and colleagues with death. On September 7, three Awlo Media Center journalists and media workers were among a group of reporters that were stopped at the Bole International Airport in Addis Ababa and barred from travelling to Tigray to cover the election that the federal government deemed illegitimate, according to reports by Reuters and the U.S. Congress-funded Voice of America.