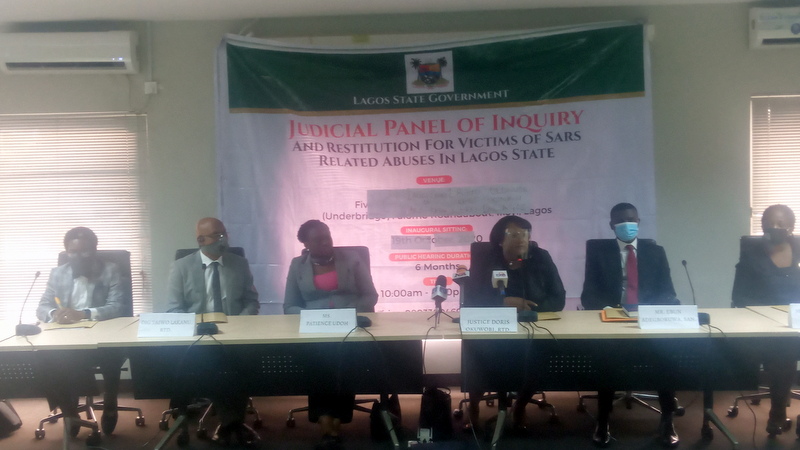 Mr Agwu said he was tortured by the officers and was asked to write a statement that he was responsible for the missing funds from the company, which he declined.

A victim of police brutality in Lagos State has urged the Lagos Judicial Panel of Inquiry to compel the Nigerian Police Force and the disbanded Special Anti-Robbery Squad (SARS) to pay a N10 million damage awarded to him by a Federal High Court.

Okolue Agwu, who recounted his experience to the panel, said he was arrested in 2012 by police officers from Ojo Division and handed over to SARS, Ikeja, where he was illegally detained for 47 days on account that he stole money belonging to his former employer.

“I had a brutal experience with SARS in 2012, then I used to work with a company as a manager.

“I worked with the company for about four years, before I resigned and my boss authenticated my resignation.

“After some days, I was called upon for clarification and from there I was arrested by the Ojo Police Division and they handed him over to Ikeja SARS.”

Mr Agwu said he was tortured by the officers and was asked to write a statement that he was responsible for the missing funds from the company, which he declined.

The victim said he was taken back to Ojo Division the next day, where the officers beat and injured him and paraded him round Alaba international market, pronouncing him as a robber.

“I spent 47 days with SARS at Ikeja, one Inspector Sunday (baba Ijapa) ASP Haruna did all sorts of things.

“My family did not even know I was there and when they eventually got to see me, the officers beat my wife and mother in my presence,” Mr Agwu said.

He also told the panel that the officers took over his house, landed properties and other belongings including his Acura Jeep, Volkswagen bus, generator, inverter and phones.

Mr Agwu said after the intervention of his lawyer, he was taken to court where he was found not guilty.

In 2016, he obtained a favourable ruling, where the judge, Ibrahim Buba, gave a ruling of N10 million as exemplary damages.

Mr Agwu, who was accompanied by his legal counsel, T. O Gozali, said till date, the police are yet to pay the compensation despite all the efforts of the lawyers.

Mr Agwu pleaded that the judicial panel of inquiry should compel the police to obey the court order.

The judicial panel led by retired Justice, Doris Okuwobi, admitted the ruling of the Federal High Court delivered by Justice Ibrahim Buba on 2016.

The panel said the complainant should await action in the next seven working days.