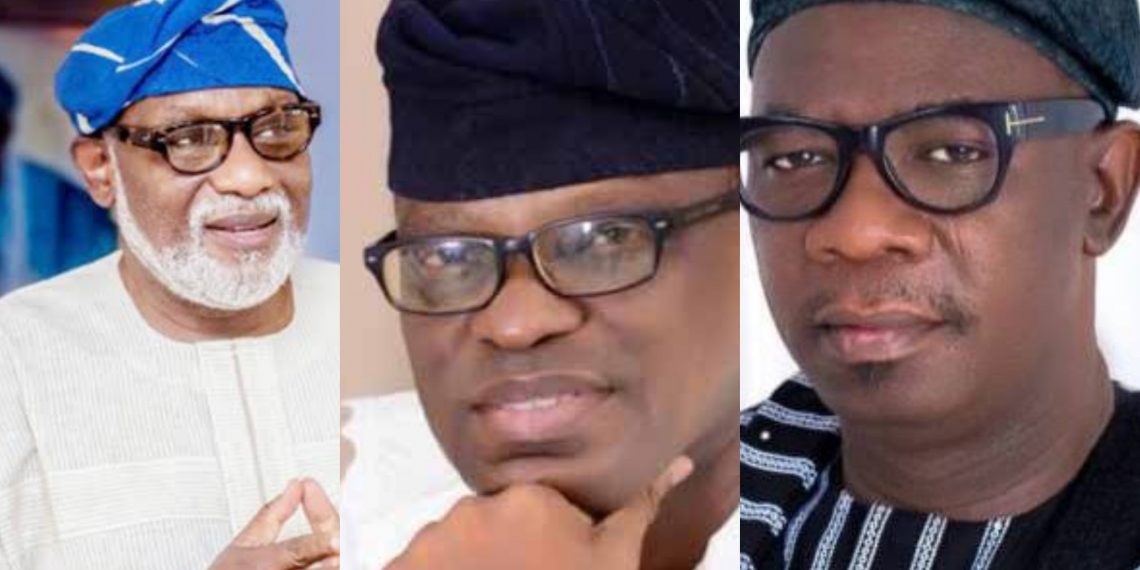 There are 17 political parties on the ballot papers for Saturday's governorship election in Ondo State but pundits predict a three-horse race.

The Independent National Electoral Commission (INEC) has 17 political parties on the ballot papers for the October 10 governorship election in Ondo State.

Voters in the 18 local government areas spread evenly across the three different senatorial districts of the state will elect one of the 17 to govern the state for the next four years.

The race to the Alagbaka Government House, however, is widely seen as a tight contest between three lawyers from three different senatorial districts and three major political parties in the state.

They are Rotimi Akeredolu, Eyitayo Jegede and Agboola Ajayi – candidates of the ruling All Progressives Congress (APC), the Peoples Democratic Party (PDP), and the Zenith Labour Party (ZLP) respectively.

The three major candidates have strong structures in the 18 local government areas of the state.

On Tuesday, the chairman of the National Peace Committee and former Head of State, Abdulsalami Abubakar, enjoined the contestants to commit to the spirit of the peace accord they signed ahead of the poll.

PREMIUM TIMES looks at the profile of the candidates in the election.

The incumbent governor is seeking re-election under the banner of the APC. He had earlier served the state as attorney-general and was also a former president of the Nigerian Bar Association (NBA).

Mr Akeredolu hailed from Owo in Ondo North Senatorial District where he had his primary education. He attended Aquinas College in Akure, Loyola College in Ibadan, and the then University of Ife (now Obafemi Awolowo University) where he took his law degree.

Mr Akeredolu first ran for governor in 2012 as the flagbearer of the Action Congress of Nigeria (ACN), one of the parties that fused into the APC in 2014.

He ran at that time against the then governor Olusegun Mimiko of the Labour Party (LP), and Olusola Oke of the PDP.

In 2016, Mr Akeredolu ran again under the APC and won.

He earlier had issues with many of his party’s leaders, including those in a faction – Unity Forum – headed by a former deputy governor, Ali Olanusi, believed to have been formed to thwart Mr Akeredolu’s reelection ambition.

Mr Akeredolu and his deputy also had issues which led to the exit of Agboola Ajayi from APC.

Agboola Ajayi is a popular grassroots politician who has been in the game since the 80s under the Social Democratic Party (SDP), PDP and APC.

The lawyer and businessman was the chairman of Ese-Odo Local Government Area between 2004 and 2007.

He was later elected to the House of Representatives to represent Ilaje/Ese-Odo federal constituency under the PDP.

At the green chamber, Mr Ajayi was chairman of the house committee on Niger Delta Development Commission (NDDC) between 2007 and 2010.

He also served as a member of many other committees, including gas, habitat, justice and industry between 2007 and 2011.

The Ese-Odo born politician in Ondo South dumped PDP for APC to run as the runningmate to Mr Akeredolu in the November 26, 2016 governorship election which they won.

But they fought in the buildup to the 2020 election, following which Mr Ajayi joined the PDP. But he left the PDP a month after following his defeat in the party’s governorship primary. He switched camp to the ZLP with the support of former governor Olusegun Mimiko. He also survived attempts by the state’s lawmakers to impeach him after his defection from the APC.

The Senior Advocate of Nigeria hails from Akure, the capital of the state, in Ondo Central senatorial district.

He was the Chancellor of Anglican Communion of Jalingo, Taraba State. Mr Jegede is also a former Chancellor of Anglican Dioceses of Yola and a member of the Implementation Committee of the American University, Yola, Adamawa State, as well as a member, Chairman Board of Governors, ABTI Academy International School and member, Board of Trustees, Elizade University, Ilara Mokin, Ondo State.

In May 2009, Mr Mimiko appointed him as the Attorney-General and Commissioner for Justice of Ondo State.

There were disputes around his candidacy in 2016 but the court resolved them in his favour a few days to the election, which he lost to Mr Akeredolu of the APC.

Mr Jegede is one of the most popular candidates and has vowed to defeat other contestants.

Mr Adelegan is a public relations expert and the President and Chairman of Nigerian-British Chamber of Commerce and Industry.

Before he became the candidate of the ADC, he tried picking the race ticket of the APC under Unity Forum, an APC group formerly opposing the second term ticket for Mr Akeredolu.

He later decamped to become the candidate of the ADC.

The Young Progressive Party’s (YPP) candidate is the youngest person in the race. The 38-year-old candidate is a journalist and from the minority Ese-Odo council of Ondo South District.

He worked with many media organisations before moving into politics and is popular among the youth of the state.

Despite his minority background, he has boasted that he would win the election.

The candidate of the Accord Party has a history of speaking for the youth. The political science graduate has boasted of getting the support of young people in Ondo but lacks strong structures.

Like the party’s presidential candidate in 2019, Omoyele Sowore, the candidate of AAC in Ondo State, Mr Adeleye has been making use of social media for his campaign.

He also campaigned among the youth with the #RevolutionNow campaign slogan as a way to effect positive change in the state.

The SDP’s candidate, Peter Fasua, said he has stepped down.