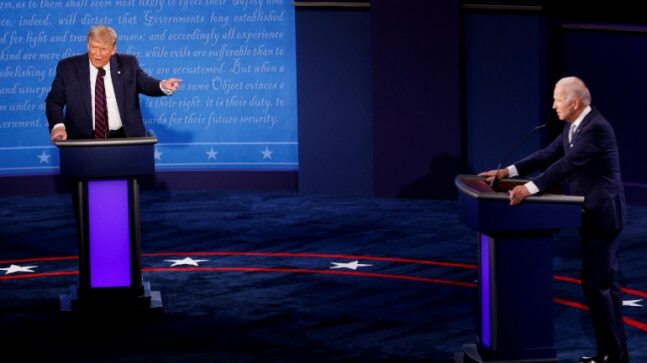 Trump and Biden at the debate (PHOTO CREDIT: Times)

Next U.S. presidential debate to be held virtually – Commission

Trump says he will not participate in a virtual debate with Biden.

The second U.S. presidential debate slated for October 15 will be virtual, an official said, with President Donald Trump and his Democratic challenger Joe Biden expected toparticipate in the townhall style event from remote locations.

The Commission on Presidential Debates said this on Thursday in a statement.

The debate will take the form of an online town hall meeting in order to protect the health and safety of participants.

The audience, who typically ask the candidates questions in the town-meeting format, and moderator Steve Scully will gather in one spot in Florida, Miami’s Adrienne Arsht Centre for the Performing Arts, the commission said.

The commission said the decision was made “to protect the health and safety of all involved.”

ALSO READ: Trump vs Biden: A Shame of a Presidential Debate

Last Thursday, Trump tested positive for COVID-19, raising concerns that during the first debate on the preceding Tuesday he had infected Biden and moderator Chris Wallace.

However, Trump says he will not participate in a virtual debate with Biden. (Reuters/NAN)