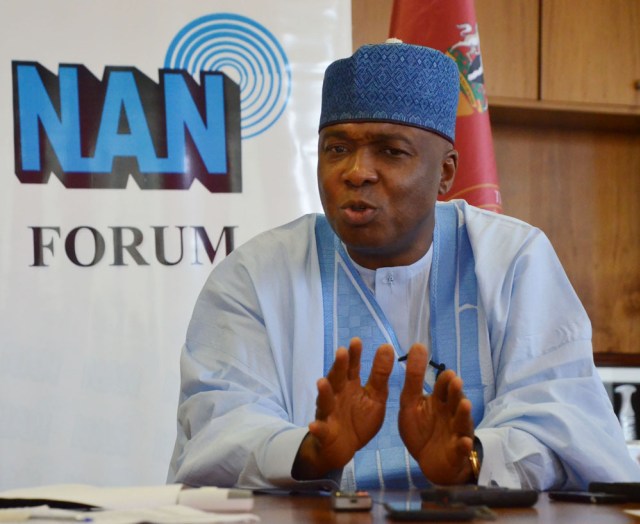 Mr Saraki says the result of the election shows that Nigerians desire to be governed by a truly democratic government led by those they genuinely voted for.

Immediate past Senate President, Bukola Saraki, has congratulated Governor Godwin Obaseki of Edo State on his re-election, saying it has several symbolic representations for Nigeria and its democracy.

Mr Saraki, in a statement from his Media Office in Abuja, said Mr Obaseki’s victory underscored the determination of the people of Edo State to decide who governs the state and to ensure their votes count at all times.

“The result of the Edo election represents the true wish of the people who stood firmly behind their Governor against power mongers who were determined to foist their choice on the people. It represents the will of the people to vote in free, fair, credible and peaceful elections. The people of Edo State who had sleepless nights in order to protect their votes, those who rejected the cash being thrown around to buy their votes and the intimidation to force them to compromise their belief, deserve our praise. Therefore, my congratulations go to all the people of Edo State.

“Let me give kudos to the leaders and governors in our party, the PDP, for working together to achieve this victory. The PDP leaders and members in Edo State who whole-heartedly accepted Governor Obaseki since he joined the party and co-operated with him to bring about this victory deserve to be appreciated

“The result of the just concluded election also represents the fact that our people actually desire to be governed by a truly democratic government headed by those they genuinely voted for. It represents the fact that our security and electoral officials can conduct free and fair elections if they have the right atmosphere. We are happy that throughout this election we did not see the military brutalizing the people or security officials supervising the snatching of ballot boxes and vandalisation of votes. Thus, the military and other security agencies deserve commendation for this successful polls.

“Also, we saw how the INEC officials maturely handled the complaints of the APC agent who sought to create confusion at the state collation centre when the Orihomwon Local Government result was about to be declared. The INEC and its officials deserve to be commended for their neutrality in this election.

“We can see that the result represents realistic figures from one local government area to the other. No case of outlandish figures being reeled out. That is also a sign of some level of credibility in the process. It is for the above reasons that I have to commend President Muhammadu Buhari for keeping the military out of this election and for giving the instructions that led to the apparent neutrality of members of the Independent National Electoral Commission (INEC) and other security officials in the entire process”, Saraki stated.

He further urged Governor Obaseki to see his victory as a charge by the people to intensify his focus on development of the state and the welfare of its people.

“The Edo election result is a victory for our country, her people and democracy. We have shown that the glory of the country is more valuable to the citizens than the wish of a tiny power clique,” he concluded.

ANALYSIS: How Tinubu ‘propelled’ Obaseki to victory against Oshiomhole, APC