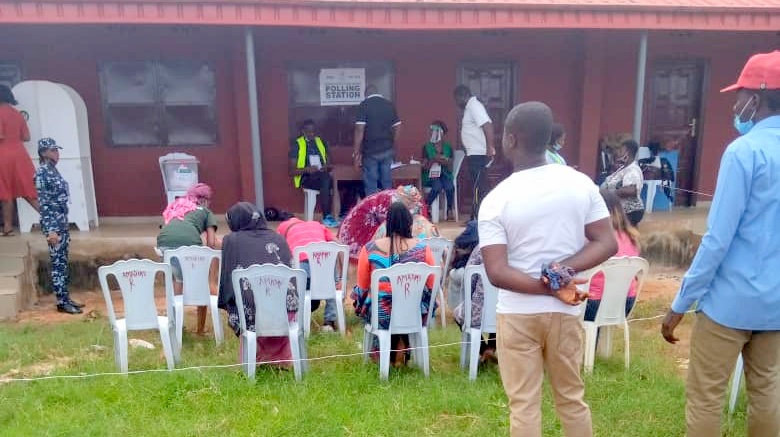 11:30am, Ward 06 (Oluku) PU 001 (Okhumwun Elaba Primary School) in Ovia North-East ... Covid-19 Protocols are duly observed and there is peace in the environment

The organisation had deployed about 500 observers to monitor Saturday’s governorship elections in Edo State.

The Youth Initiative for Advocacy, Growth, and Advancement (YIAGA), a non-governmental organisation, has released its preliminary report, which painted troublesome details of how the exercise erupted into violence in some parts of the state.

The organisation said it deployed about 500 observers to monitor Saturday’s governorship elections in Edo State.

Although there were 14 political parties on the ballot when polls opened Saturday morning, the election was a straight and open race between two major parties whose candidates are Osagie Ize-Iyamu of the All Progressives APC, and the incumbent governor Godwin Obaseki of the Peoples Democratic Party (PDP).

YIAGA’s observations, which were processed and analysed at its election analysis centre, showed several verified incident reports to include “ballot box snatching, sporadic shootings and interference, and disruption of the election process, intimidation, and harassment of observers/journalists and vote-buying.”

The report builds on the Pre-Election observation earlier published by YIAGA which revealed that the election will be defined by “strong-arm tactics if concerted efforts are not made to deescalate the tension.”

The incident took place at the polling unit of the immediate past national chairman of the All Progressives Congress (APC), Adams Oshiomhole, at Ward 10 (Uzairue North East), Polling Unit 1 of Etsako West local government in Iyamho area of Uzairue.

A PREMIUM TIMES journalist, Samson Adenekan, was slapped, manhandled and then briefly detained by the thugs for allegedly taking pictures and videos.

INEC, the election umpire also said it was aware of a shooting incident in Orhionmwon local government of Edo State, vowing to bring all electoral offenders to justice.

YIAGA, in its Mid-Day Situational Statement for Edo Governorship Elections, said thirteen out of 18 LGAs were classified as hotspots due to the spate of violence.

“As predicted by Yiaga Africa in the pre-election, there were more critical incident reports from Oredo, Orhionwon, Igueben, Egor, Ikpoba-Okha and Esan North-East at the commencement of today’s poll,” the report noted.

Read the initial findings of YIAGA in full as follows:

On Saturday 19, September 2020, Yiaga Africa WTV deployed 500 carefully trained stationary observers and 25 mobile observers in all the 18 local government areas (LGAs) in Edo state to observe the voting process and share reports on the conduct of the election at the polling units’ level.

As noted in our pre-election statement, this is the first state-wide election to be conducted amidst the COVID-19 pandemic and governed by new guidelines introduced by the Independent National Electoral Commission (INEC).

In addition, the Pre-Election observation indicated that the stakes are high as our findings revealed that the election will be defined by strong-arm tactics if concerted efforts are not made to deescalate the tension. Thirteen out of 18 LGAs were classified as hotspots due to the spate of Violence.

As predicted by Yiaga Africa in the pre-election, there were more critical incident reports from Oredo, Orhionwon, Igueben, Egor, Ikpoba-Okha and Esan North-East at the commencement of today’s poll. Some of the verified incident reports include ballot box snatching, sporadic shootings and interference and disruption of the election process, intimidation and harassment of observers/journalists and vote-buying.

This Mid-day situational Analysis provides information on the commencement of polls, availability of election materials and critical incidents that may impact on the quality of the election. Yiaga Africa WTV is leveraging the parallel vote tabulation (PVT) methodology to observe this election and will be providing accurate and timely information on the election process.

On election day, some police officers prevented observers and media from accessing Yiaga Africa’s data centre in Benin city for about three hours. Upon escalating the incident, the leadership of the Nigerian police responded and resolved the issue.

However, police officers were deployed to closely monitor Yiaga Africa’s data centre and press conference. Yiaga Africa commends the leadership of the police, in particular, the Deputy Inspector-General of Police, Olaleye Oyebade for promptly responding to this issue.

Yiaga Africa notes that although this issue has been resolved, we are concerned with the deployment of police officers to closely monitor the Yiaga Africa’s press conference. Yiaga Africa would like to thank sister election observer groups and the international community for their solidarity and support.

Yiaga Africa’s WTV observation for the Edo governorship election is fully operational. These are preliminary findings as at 2:00 pm election day. At this time, Yiaga Africa has received reports from 236 of 250 sampled polling units across the 18 LGAs.

This report highlights the late commencement of accreditation and voting and notes the disregard of the COVID-19 protocol requiring physical distancing and mandatory use of face mask/face covering across polling units.

As noted in our pre-election statement, Yiaga Africa is concerned that Edo state may experience a spike in the number of COVID-19 cases in the aftermath of the election given the non-compliance with health guidelines and the absence of health officials or task force to support INEC in enforcing during the election.

The following data will be updated as additional reports are received from WTV observers at sampled polling units.

· As of 7:30 am, Yiaga Africa WTV observers reported that INEC officials had arrived at 38% of polling units.

· In addition, 97% of polling units had security agents present.

Yiaga Africa has received a total of 18 verified incident reports. They include the following;

· Intimidation and Harassment of Election Observers: Yiaga Africa WTV observers were harassed and their observation materials were confiscated by party agents in Edogun Primary School Hall I, Polling Unit in Orhionmwon LGA and Ozolua Grammar School, Polling Unit 009 of Ward 10 in Ikpoba/Okha LGA.

· Violent Disruption of the Accreditation and Voting Process: Yiaga Africa observers reported sporadic shooting leading to the suspension of voting in Idumwongo Polling Unit 5, Ward 7 in Orhionmwon LGA. The voting process was also disrupted in Obodeko Primary School, PU 003 in Ward 8 of Igueben LGA where a political party supporter mobilized thugs to the PU to disrupt the process.

· Interference by Party Agents: Party agents interfered in the accreditation and voting process in PU 001 at Ugbo Wardin Orhionmwon LGA; Ukpato Ward, Evbuosa Pri/Sch Iguemokhua PU, Orhionmwon II. In Ihogbe Secondary School, Unit 006. Ward 5 of Oredo LGA, a political party agent gave a voter a PVC that does not belong to him to vote, the culprit was apprehended by the security.

Yiaga Africa calls on INEC to:

1. Given the late commencement of polls, INEC should extend the voting time to allow voters who are on the queue to exercise their franchise

2. As the voting process comes to end, ensure that the ballots are counted openly and that all polling units have the Forms EC60E posted at the polling unit for the public

3. Ensure that the polling unit result sheet; form EC8A for each polling is uploaded on the INEC Result Viewing Portal

4. Ensure strict compliance with the application of the election guidelines in the result collation process

5. Should caution security officers deployed in the field to refrain from intimidating observers and journalist as the results collation commences

6. Should ensure security personnel remain professional and non-partisan throughout the election,

In conclusion, Yiaga Africa commends the good people of Edo state for their peaceful conduct during the voting process and plead they remain patient and peaceful through the voting and counting process. Yiaga Africa will provide updates as the process comes to an end collation commences. Yiaga Africa restates her commitment to share accurate data and information on the conduct of the election and results based on its deployment of the Parallel Vote Tabulation methodology.

“Driven by Data – For All Nigerians – Beholden to None!”

About Yiaga Africa and Watching The Vote

Yiaga Africa is a non-profit civic hub of change makers building democratic societies in Africa anchored on the principles of inclusion, justice, rule of law and accountability. Yiaga Africa achieves its goal through research, capacity development and policy advocacy. Yiaga Africa has been involved in election observation since 2007 and it is one of the leading organizations working on elections in Nigeria.

Yiaga Africa Watching The Vote is a citizen-led election observation initiative aimed at enhancing the integrity of elections in Nigeria using technological tools like SMS and evidence-based research methodologies to further election observation. The initiative is designed to promote credible elections and boost citizens’ confidence in the electoral process through a citizen’s observation of electoral activities in the electoral cycle. Yiaga Africa is enhancing the quality of democracy in Nigeria using the WTV as a platform for promoting cutting-edge electoral policies, credible elections, civic participation and democratic consolidation.

Yiaga Africa’s WTV will observe the process until the end. Our observers will remain at polling units until accreditation, voting, and counting are completed and the official results have been announced and posted by the polling officials. Yiaga Africa will issue additional updates as appropriate and intends to issue a preliminary statement on the conduct of accreditation and voting, and counting on Saturday, September 19 at the HomeVille Plus hotel at 7:00 pm.

INTERVIEW: #Edo 2020 Election: How to end vote-buying in Nigeria – Lawyer